Ontario has some very interesting geological features named after the devil.  So far we’ve visited five of them, all of which have a beauty one wouldn’t normally associate with their namesake.  The links for each are given as well as a brief description of what can be seen there.  Google Maps links for the locations are contained in each story.

The Devil’s Punch Bowl is a 37-metre waterfall on Stoney Creek.  There is a 7-metre lower punch bowl and combined all the layers of the Niagara Escarpment are exposed here.  Stories suggest that at one time the water from the falls was collected and used by local moonshiners and so the area took the name The Devil’s Punch Bowl.

The Devil’s Pulpit looks out over the Forks of the Credit.  It is accessed by the Bruce Trail and involves a climb up the side of the escarpment as seen in the cover photo. Having climbed to the top you are treated to the expansive vista pictured below which has its charms regardless of the season.  This site was formerly known as the Forks Quarries but is now known as the Devil’s Pulpit. 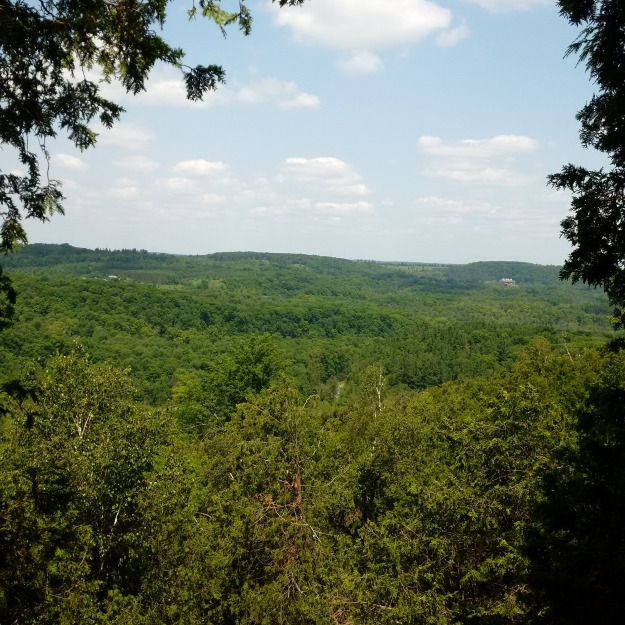 The world’s largest intact glacial pothole is known as the Devil’s Well.  There are six obvious potholes along the top of the cliff that was formed when calcium and magnesium carbonates in the limestone were dissolved in mildly acidic rainwater.  Rapidly moving water at the end of the last ice age would have scoured the inside of these karst formations and created the potholes, five of which merged into each other.  The remaining pothole is over 13 metres deep and has a maximum diameter of 6.4 metres.  The Devil’s Well is truly a remarkable pothole.

North of Oakville is a cave that has collapsed and the entrance is now closed.  Behind this rock, it may still open up into a cavern known as the Devil’s Cave.  The pool in the back of the cave was referred to as the Devil’s Pool.  This cave may have played a role in the aftermath of the 1837 Rebellion in that rebel leader William Lyon Mackenzie is said to have stayed in the Devil’s Cave one night during his flight to exile in the United States.

Devil’s Falls drops 12-metres into the Grand River and is the farthest away from the GTA of these five devils.  The picture below shows a side view from the top as we were unwilling to try and scale down the side of the ravine.  Local stories of smoke that came out of a cave part way down the side were used to discourage children from playing on the steep cliffs.  The idea that the devil lived in the cave led to the name Devil’s Creek being applied to the short waterway nearby which ends at Devil’s Falls.

We have yet to visit the Devil’s Tabletop.  Please reply with a comment if you know of another geological feature with “Devil” in the name that may be of interest to readers.

4 thoughts on “The Devil Made Me Do It”