The Chedoke Radial Trail is 2.7 kilometres long, it was opened in 1995 and follows the former right of way for the Brantford and Hamilton Electric Railway.  The word “Chedoke” sounds like a native word but is actually a mispronunciation of the words Seven Oaks and refers to a patch of trees that originally stood in the area.  Several waterfalls can be seen from the trail and so we set off to view the ones between the parking lot on Scenic Drive near Chateau Court and Sanatorium Falls.

Two attempts were made to build a railway up the escarpment from Hamilton to Ancaster beginning in 1896 before an actual line was built ten years later.  The sod turning ceremony for the railway took place on August 6, 1906 but construction didn’t begin until late in the year.  Service was opened to Ancaster on December 21, 1907 and to Brantford on May 23, 1908.  The rail line runs up the escarpment at 2.5% to 5% incline.  By June 30, 1931 the line was underused and service was discontinued.  The final trip was made using the same cars as the first run up the escarpment.  Hamilton Parks Board was given the former right of way in 1938 but it would take nearly 60 years to become the Chedoke Radial Trail.  The post card below was post marked on October 16, 1909 and shows a bridge over a railway cut along the line. 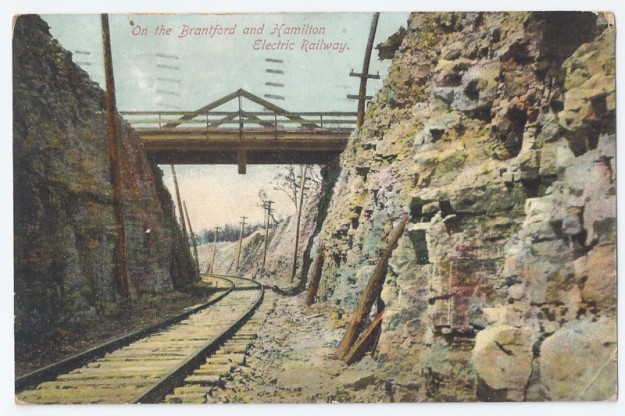 The bridge is long gone, as are the electric poles that powered the railway cars.

The first set of falls you come to is known as Upper Princess Falls. They are set back in a little limestone cavern and carry Lang’s Creek over a 6.7 metre drop into a deep plunge pool. 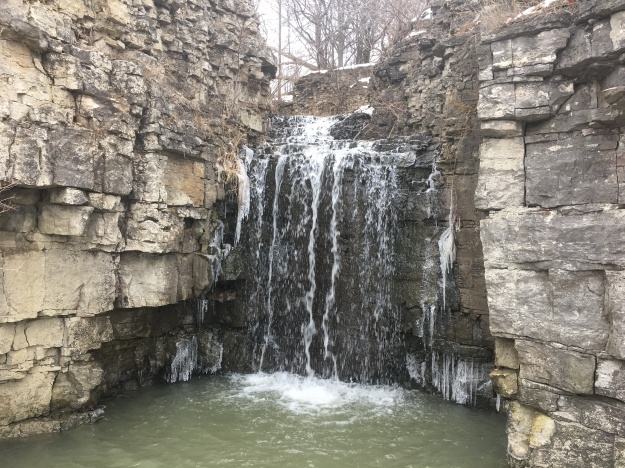 After flowing over Upper Princess Falls this tributary of Chedoke Creek is intended to pass under the trail in a culvert in the bottom of the plunge pool.  Instead, it often flows over the trail and through a fence before dropping 39.5 metres to the level of the 403.  Lower Princess Falls is quite spectacular when viewed from below.

There are a few weeks in the year when Christmas ornaments look pretty on the trees in our parks.  However, after January they start to look like litter hanging in the trees.  Perhaps the people who hang them could come back and retrieve them later.

This rock formation can be seen from the trail and is included here as an example of why one must be careful how close they walk to the edge of the escarpment.  This chunk of rock is well undercut and has a large crack along the back of it.  Walking out to the edge could lead to a sudden dislodging of the rock and a nasty tumble. 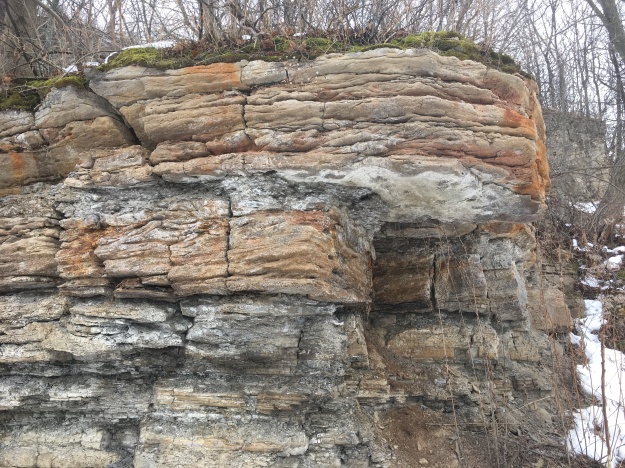 The Royal Hamilton Light Infantry were established in 1862 and used to have a rifle range in West Hamilton.  When the Brantford and Hamilton Electric Railway was built they extended the rock cut with a lengthy stone wall to protect the riders from stray bullets.  Rifle Range Road in Hamilton commemorates the Light Infantry and runs beside Alexander Park which can be seen from the rail line.

When the Bruce Trail was opened there were three culverts installed and covered with concrete to allow pedestrians to cross Chedoke Creek.  The escarpment face was covered with patterned concrete to create a spillway for the water to flow down before entering the three culverts.  Over the years the concrete has become cracked and the water flows under it and around the culverts.  A bridge was installed in 2007 over the culverts at a cost of $60,000.   Five years later the bridge needed to be replaced and extended due to heavy erosion.  The new bridge ended up with a price tag of $950,000.

Mountainview Falls is a classical complex cascade that drops 10 metres and has a width of 6 metres.  For a century this waterfall was known simply as the water fall on the mountain.  When a comprehensive listing of the Hamilton Waterfalls was made in 2002 it was given the name Mountainview after a small community that once existed here.  The entire side of the hill was given erosion control below the waterfall but this concrete is broken and being washed away.

Mountainview Falls are actually quite nice when you get up close and eliminate all the man made concrete below them.

Construction of Hamilton’s first reservoir began with land acquisition in 1856 and soon the hand dug reservoir had a capacity of 9 million gallons.  Some time in the 1980’s the reservoir was covered over with a concrete shell and grass was planted on top.  After becoming overgrown with hawthorn bushes it was barely discernible.  Recently the shrubs have been cleared away but the sides of the reservoir have become a target for grafitti.

At the base of Sanatorium Falls is a old hub where a water wheel once rotated.  The main shaft for the wheel would have been made from a single piece of seasoned white oak.

Sanatorium Falls marks the connecting point to a previous exploration of the Mountain Sanatorium.  At one time a set of stairs connected the railway with the Sanatorium so that workers could use the rail line to get to the hospital.  Every day they would have enjoyed a view of the falls as they started and finished their shift. 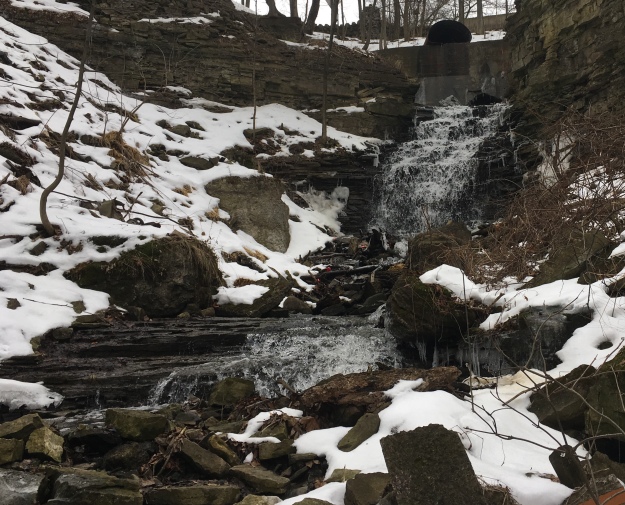 There are several more falls that can be seen along the trail, but these will be saved for a future expedition.