Tuberculosis has the historic name of Consumption because one of the symptoms is weight loss.  This, along with a chronic cough, fever, night sweats and blood in the sputum would kill half of the people who developed an active bacterial infection.  The disease is transmitted by the coughing or sneezing of an infected person.  By the 1880s a campaign was started in Britain to have victims enter sanatoria to keep them isolated and provide fresh air and labour to help facilitate a cure.  In  Canada, the first sanatorium was opened in 1898 in Gravenhurst and a second one was added in 1902.  These were both filled and soon Calydor Sanatorium was opened in 1908 as well.  The third sanatorium in Canada was opened in Weston in 1904 with the Mountain Sanatorium being fourth in 1906.

Originally the hospital consisted of 8 patients in 2 tents on a donated farm atop Hamilton Mountain.  In 1943 drug therapy replaced years of bedrest and suddenly the Sanatorium was empty and in danger of closing.  The TB clinic was extended by bringing in Inuit patients from the north where there were no clinics. By 1961 even these patients were not enough to keep the hospital busy and it began to serve as the Chedoke General and Children’s Hospital.  In 1979 it merged with McMaster Hospitals and by 1997 was known as the Chedoke Hospital of Hamilton Health Sciences.  It has since been closed and abandoned.  The property has been sold to developers who have started to remove the old buildings.  All of the buildings encircled by Sanatorium Road and Scenic Drive were removed between 2013 and 2014.  Only the Long & Bisby Building remains.

The Long & Bisby Building is one of the oldest remaining structures on the site, having been built in 1920 as a nurses residence.  The building is named after the people who owned the property in 1906 and donated it for the construction of the hospital.  I’m glad this building is standing, at least for the time being.  I wonder if Mr. W. D. Long and Mrs. George H. Bixby would approve of the housing development that is about to happen on their former property.

Near the Long & Bisby Building and right near the road is Upper Sanatorium Falls.  It is 9-metres high and classified as a complex ribbon cascade.  It is 3-metres wide and carries a tributary of Chedoke Creek over the escarpment.  When the Sanatorium opened there was a set of concrete steps on the west side and a bridge that led to a long set of wooden steps.  These steps led to the Brantford and Hamilton Electric Railway Company line that allowed employees who lived at the site to get easy access to town for schooling and shopping.  Two original stone pillars remain beside the road to mark the spot.

From the top of the escarpment, you can see the city of Hamilton with the Skyway Bridge in the background.

Following the blue side trail, you come to an unmaintained foot trail that snakes its way down the side of the escarpment to meet the rail trail part way down.  The Brantford and Hamilton Electric Railway Company was opened in 1908 and operated until 1931.  It ran electric radial cars from Brantford to Hamilton every hour but generally provided no freight service on the line.  The Depression took a toll on the rail line and it was sold and closed on July 30, 1931.  Most of the rails were removed in 1932 and now there is a 2.7-kilometre section that is operated as the Chedoke Rail Trail but is also shared by The Bruce Trail.  The picture below shows the bridge on the trail that replaces the original rail bridge on the creek below Sanatorium Falls.

Returning to the area where so many of the Sanatorium buildings have been removed you can still make out traces of the elaborate landscaping that existed for therapeutic purposes.  An old footbridge remains but it connects two places that no longer exist. 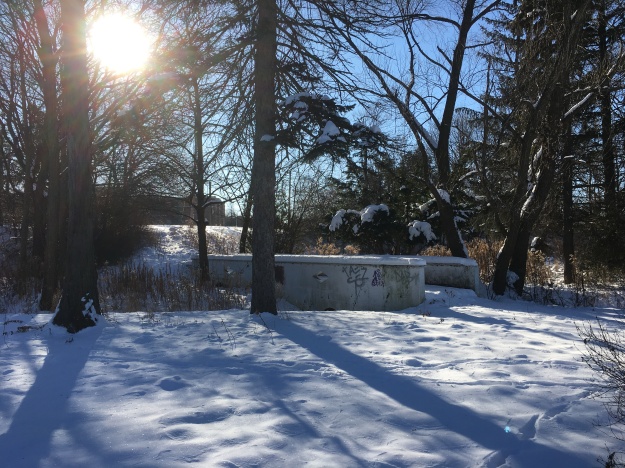 The Cross of Lorraine is styled as a two-beamed cross and dates back to the 12th century. In 1902 the American Lung Association selected the cross as symbolic of the fight against tuberculosis.  As the Mountain Sanatorium was built to combat tuberculosis it is appropriate that in November 1953 one was constructed on the side of the escarpment near the main buildings.

The second cluster of buildings stands to the west of the escarpment face, now separated by a housing development.  Most of the buildings on the north side of Sanatorium Road appear to be waiting for demolition to make way for Chedoke Heights housing development.  On the south side of the road is the Medical Superintendents Residence which was built in 1922.  Initially, the Medical Superintendent lived in the Macklem family farmhouse until it was destroyed by fire.  This building stands behind the 1932 Patterson Building which was constructed as a 4-story nurses residence.

The Empire Building was constructed in 1926-1927 to replace the Empire Shack which was one of the first buildings to be constructed following the period where patients were housed in tents.  This building appears to be in danger of demolition. 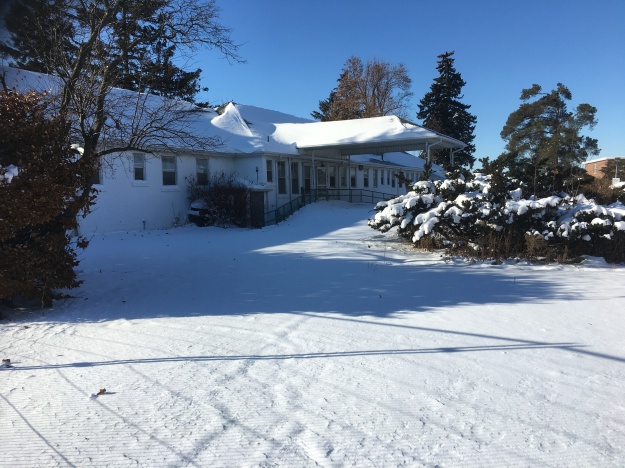 Also in danger of demolition is the Wilcox Building.  Charles Seward Wilcox made a donation of $250,000 for the construction of this pavilion and the sod turning ceremony took place on July 18, 1938.  By the time the Wilcox Building opened on January 7, 1939, its benefactor had been dead for six weeks of an illness that he had been suffering from at the time of the sod turning.  This building is also in the way of some badly needed housing development.

The building has the Cross of Lorraine in the concrete below the windows.  The Wilcox building is surrounded by several others that are slated for demolition.

The Holbrook Pavillion was built in 1950-1951 but no one stands in the parking control booth anymore. 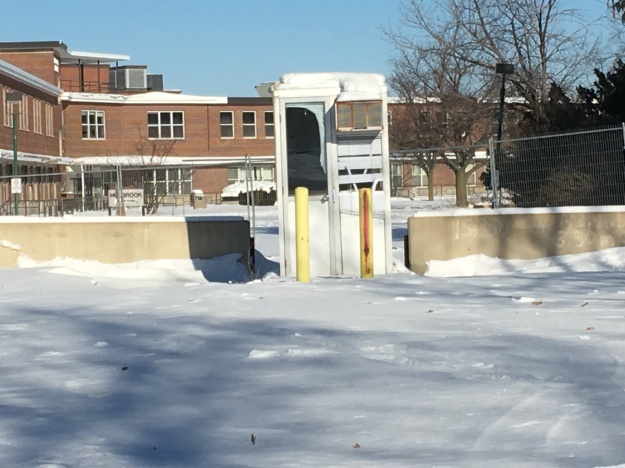 It remains to be seen what the neighbourhood will look like in ten years but I’m glad to have got some pictures before the historical side of the Sanatorium is lost forever.