Summer officially started at 6:51 am.  So we did too!  It was a beautiful morning.  As I arrived on Emmett Road I saw a white tailed deer walk off of the soccer field (World Cup fever has taken over everywhere) and cross the road right in front of me.  She stopped and waited until I had my camera almost ready before disappearing into the woods.  We parked in the parking lot on Emmett and entered the woods on the east side of the river. This property was originally granted to John Dennis who died in 1832 in Toronto’s cholera epidemic.  His grandson, Henry Dennis, ran a saw mill on this site after 1851 but we saw no traces of it.

We walked north along the east side of the river planning to cover lots 1 through 5 between Eglinton and Lawrence Ave.  A tall smoke stack on the eastern hill marks the site of West Park Healthcare Centre.  It was opened in 1904 as the Toronto Free Hospital For Consumptive Poor.  Consumption is an older term for Tuberculosis or TB.  The hospital was generally known as Weston Sanitorium or “The San”.  The first effective treatment for TB was Streptomycin in the mid-1940’s.  It was given by injection or intravenous and became the cure for “the white plague”.

Close to the river, near the old hospital there is a large area of bottles in the woods.  There are dozens of little medication bottles for injections.  The smallest one in the middle of the picture below is dated 1948 and the slightly larger one on the right is 1945.  I have seen many medicine bottles shaped like the long rectangular bottle but none of them curved at the bottom like this one. It has HSP for hospital imprinted on the bottom and the shape may be for hanging it for IV purposes.  Glass containers were first used in the mid 1940’s for IV and were initially packed by the hospital pharmacy as this one likely was. Later, they were packed by major companies and then plastic replaced glass containers in the 1970’s.  Any or all of these three bottles could have contained Streptomycin for treating the TB patients in the hospital.

In the woods between the bottles and the hospital on the hill lie the remains of some old buildings from the farmstead on the former John Dennis property.  John Dennis was a United Empire Loyalist and it was 40 acres of his property on which the hospital was built. The picture below is the front entrance porch for the house.

A few feet away there are several of these long cement structures which appear to be part of the fence line. 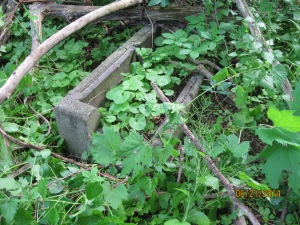 This is a view from 1962 in which the house can be seen on the right with it’s little square front entrance porch and the fence line near the bottom.

Along the water’s edge we found many fossils including Crinoids and this Brachiopod fossil.

As you walk along the east side of the river you will come to a larger water fall.  The east wall extends all the way from the river to the base of the ravine.  If you climb the ravine on the trail at the end of this wall you will find St. John’s Cemetery On the Humber.

John Denison came to York (Toronto) in 1796 and lived with Governor Simcoe at Castle Frank which was the first dwelling built by a white man in York.  In 1798 he purchased lots 3 and 4 on the Humber river.  The Denison men established themselves by serving in the war of 1812 and the rebellion of 1837.

While living in York, John had lost his infant daughter Elizabeth.  She was buried in the garden at Castle Frank because there was no burial ground in the town of York.  When he established himself on the Humber he had her moved to a plot of ground overlooking the river.  Elizabeth’s untimely death accounted for what surely must have been one of the first modern burials in Toronto. This cemetery is still in service and has been used exclusively for family members related to John Denison and the family of his wife Sophia Taylor. 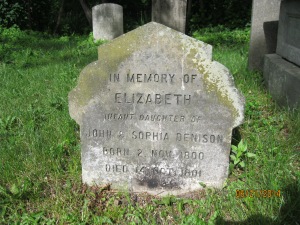 John and Sophia Denison are buried beside their daughter.

In 1930 a chapel was erected by the Denison family in memory of George Taylor Denison (1816-1873).  The grounds crew gave us a rare opportunity for someone other than family to see inside the chapel.

The smoke stack from the Sanitorium as seen from the Eglinton Street bridge.

5 thoughts on “St. John’s Cemetery On The Humber”