With the rapid expansion of the city during the 19th century there was a need for additional cemetery grounds.  In 1887 the city purchased 100 acres of land from William Shields for this purpose.  The plans were laid out to allow maximum views which originally included Lake Ontario and the Humber River Valley.  Two ravines passed through the plot of land leading to it being named Prospect Cemetery.

Many local veterans of the First World War returned home with injuries that would soon claim their lives.  The first few were buried in various cemeteries around the city.  The Great War Veterans Association and The Toronto General Burying Grounds selected a 5 acre oval section near the St. Clair Avenue entrance to the cemetery as the site of a dedicated veterans section.  Capt. James Henderson of the Royal Army Medical Corps served in Mesopotamia and returned home on leave suffering a cold that turned into pneumonia which killed him on July 16, 1917.  He became the first interment in the cemetery having lived 39 years.  He is buried near the Cross of Sacrifice which is the centre piece of the plot.  It can be seen in the background of the cover shot.  Today there are over 3,500 veterans buried in the cemetery, many of them in neat rows in the veterans plot.

Private Griffith Evans served in Europe and returned home in the summer of 1917 suffering from fatal battle wounds.  He passed away a month before the first burial in the veterans plot and was relocated here in honour of his service.

Lance Corporal Thomas Wilson came home from the war and died on October 2, 1918.  He perished a month too soon to learn that his service was part of the victory that came on November 11, 1918.

There are many soldiers buried in the cemetery in places outside of the veterans plot.  Some of them are in graves with markers that bear no mention of their service.  Others have been commemorated with a standard design maker like the one issued to Corporal William Fraser Stagg who died on the final day of 1918.  His service record indicates that the cause of death was unknown.  The Canadian Great War Project is a searchable database that contains information on the men and women who served their country during World War 1.

Some parts of the cemetery have particularly colourful displays that people have set up to commemorate their loved ones.

Prospect Cemetery is the full 105 acre lot that ran between Eglinton Avenue and St. Clair Avenue.  It is split in a couple of places by through streets, including Rogers Road where this set of gates is found.

Inside the St. Clair Avenue gates the cemetery has built a large mausoleum known as the Mausoleum of the Last Supper.  Along with white marble-fronted crypts the mausoleum features several beautiful statues including one of The Risen Christ.  There’s also a full wall dedicated to The Last Supper by Leonardo da Vinci.  The original painting covers an entire wall in the dining hall of a monastery in Milan. 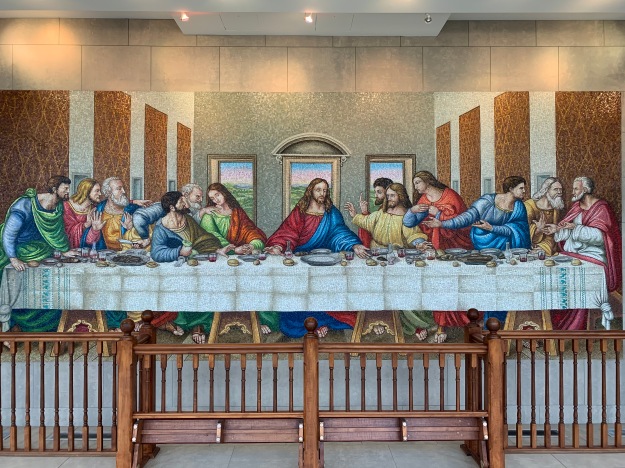 The cemetery was chosen for the veterans interment in part because the local community had made a large contribution to the war effort.  During the course of the war around 2,500 people from the neighbourhood of Earlscourt enlisted in the military.  This made them the highest per capita district in Canada and 320 of them lost their lives in the conflict.  To commemorate the 100th anniversary of the war the cemetery installed a series of 9 plaques that describe Canada’s role in the war.  Another describes the service of Earlscourt and a final one shows the locations of key battles Canadians fought in the war.  Prospect Cemetery (part of the Mount Pleasant Group of Cemeteries) has an electronic version of the memorial on their website.  The virtual war memorial can be found by following the link.  Here you can read all 11 of the plaques that were installed.

This is an interesting stone because it appears to mark the grave of a man who married twice.  Both wives were named Margaret.  William Alfred Francis appears to have survived his first wife, Margaret Armstrong by 22 years.  His second wife, Margaret Anderson survived him by another 20 years.  Both women who bore the name Mrs. Margaret Francis appear to be laid to rest with the husband they both loved.

Every cemetery is full of the stories of the lives it commemorates, if we only had the ability to read them.  Prospect cemetery tells the stories of thousands of people who defended our liberty, especially in World War 1.

Other cemeteries we’ve written about include Mount Pleasant Cemetery, The Necropolis and St. John’s Cemetery on the Humber.