Mount Pleasant Cemetery was created to provide a burial alternative for those who didn’t belong to one of the local churches that had their own cemetery in the churchyard.  The cemetery was laid out like a country garden and has become a prime place for joggers and dog walkers but it has a unique history and some interesting architecture. To start my visit I parked on Yonge Street near the main entrance to the cemetery.  My first objective was to make a side trip to St. Michael’s Cemetery, which is just south of St. Clair Avenue.  This Catholic cemetery contains an interesting piece of architecture that has been removed from Mount Pleasant Cemetery.

St. Micheal’s Cemetery opened in 1855 and is the oldest surviving Catholic cemetery in the city.  Until the mid-20th century graves were dug by hand and no interments were made during the winter.  Bodies were stored in a mortuary until the spring when burial could take place.  These buildings were often octagonal, this being determined the ideal shape for maximum storage, and took on the nickname “Dead House”.  The gates were locked and so I couldn’t get close to the vault which was designed by Joseph Sheard who would later serve as mayor in 1871-1872.

In the first part of the 19th century, York (Toronto) had no place for secular people to be buried.  Rebel leader William Lyon MacKenzie was instrumental in persuading the government to enact legislation to create a secular burial ground.  On January 26, 1826 The York General Burying Grounds Trust was established and they bought a plot of land at Yonge and Bloor for their cemetery.  It went by several names including The Potter’s Field.  Burials took place between 1826 and 1855 when it was closed and the bodies removed over the next 25 years.

The Vale of Avoca is the name given to the bridge that crosses Yellow Creek on St. Clair Avenue, just east of Yonge Street.  It is also the name of the ravine which can be entered beside the bridge.  This is the route I chose to access Mount Pleasant Cemetery.  Walking north you’ll pass the remains of an old saw mill and follow the path through a cut in the berm that marks the old mill pond.  This is where Yellow Creek emerges from a large concrete storm pipe.  It was buried in the 1950’s under ten metres of soil excavated during construction of the Yonge Subway Line.  Although one of the oldest sections of the cemetery, the earliest burials here appear to be from the 1970’s and 1980’s.  The picture below shows the emergence of Yellow Creek from beneath Mount Pleasant Cemetery.

In 1855 the re-named Toronto General Burying Grounds Trust purchased a plot of land near Riverdale to establish a new cemetery known as The Necropolis.  Many of those interred at The Potter’s Field were moved to The Necropolis.  The Necropolis stood on the ridge overlooking the Rosedale Ravine, an industrial hub of the era.  One of the businesses below was a glue factory that made visiting the cemetery a smelly affair.  The Trust sold the cemetery to the city and in 1873 went in search of a new site for their cemetery.

They bought all 200 acres of Lot 19, Concession 3 for their new cemetery, well to the north of the city at that time.  Since the 1830’s a trend toward building garden-like cemeteries outside of major cities had been in fashion.  It was decided to hire H. A. Englehardt to design the cemetery based on his work in Port Hope and Belleville.  The location was ideal because it contained both Yellow Creek and Mud Creek whose ravines created a rolling landscape.  Roads were laid in asymetrical curving patterns. The new cemetery officially opened on November 4, 1876 and now is the final resting place of over 180,000 people.

Yellow Creek was dammed to create a series of ponds that had swans in them at one point.  The ponds lasted until the depression of the 1930’s made funding for their maintenance unattainable and the ponds were filled in.  Later both Yellow Creek and Mud Creek ravines filled with subway diggings.  Englehardt collected tree specimens from all over the world with the intention of creating an arboretum at the cemetery.  His desire to have the trees labeled for the education of visitors has been carried on today.

One of the first Mausoleums you will come to after entering the cemetery from this angle is also one of the first ones built after the cemetery opened.  S. A. Oliver had opened his general merchant business on Queen Street West in 1852 and he built it into a major retailer of produce for the young city.  Oliver retired in 1872 and passed away in 1878.

The most elegant family mausoleum in the cemetery belongs to the Massey Family.  It was completed in 1894 and houses many members of the city’s most prominent industrial family. 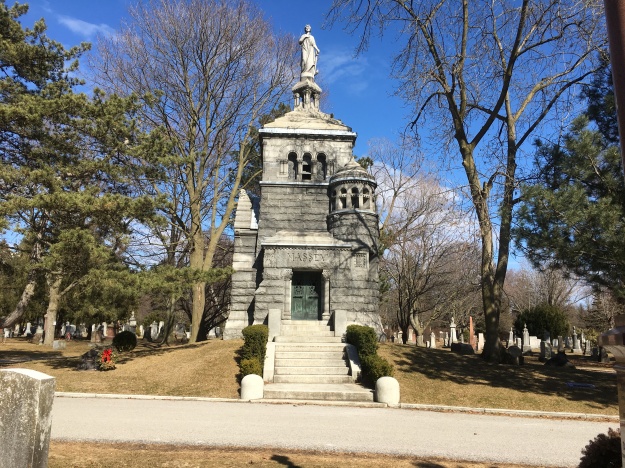 Timothy Eaton was born in Ireland in 1836 and came to Canada in 1854.  After moving around working in stores in several small communities, Eaton moved to Toronto in 1868 to open his own dry goods store.  Eaton revolutionized retail with mail order catalogues in 1884 and store owned manufacturing.  By 1907 Eaton’s was largest retailer in the Dominion.  This same year, Timothy died from pneumonia and was buried in the newly built family mausoleum in Mount Pleasant Cemetery.  17 other members of the Eaton family have been buried in this mausoleum.

Captain James Fluke was born in Ireland in 1824 and came to Canada West in 1829. Fluke became a miller operating both grist and saw mills as well as an inn. He was a captain in the militia, 3rd Company, Cartwright Volunteers, 45th Battalion, West Durham Regiment. Fluke died in April 1894 and was buried at Mount Pleasant Cemetery. His wife, Charlotte, had this mausoleum built for him and he was later moved into it. She was buried there in 1929. 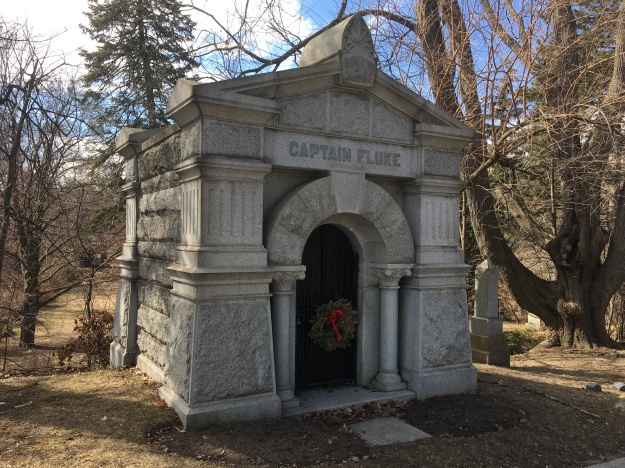 William Barker was born in Manitoba in 1894.  During the First World War, Barker shot down 50 enemy planes earning him the Military Cross and Bars and the Distinguished Service Order.  He is also one of less than 100 people awarded the Victoria Cross, Canada’s highest military honour.  He died in 1930 when a test plane crashed and he is buried in the large public mausoleum at the cemetery. 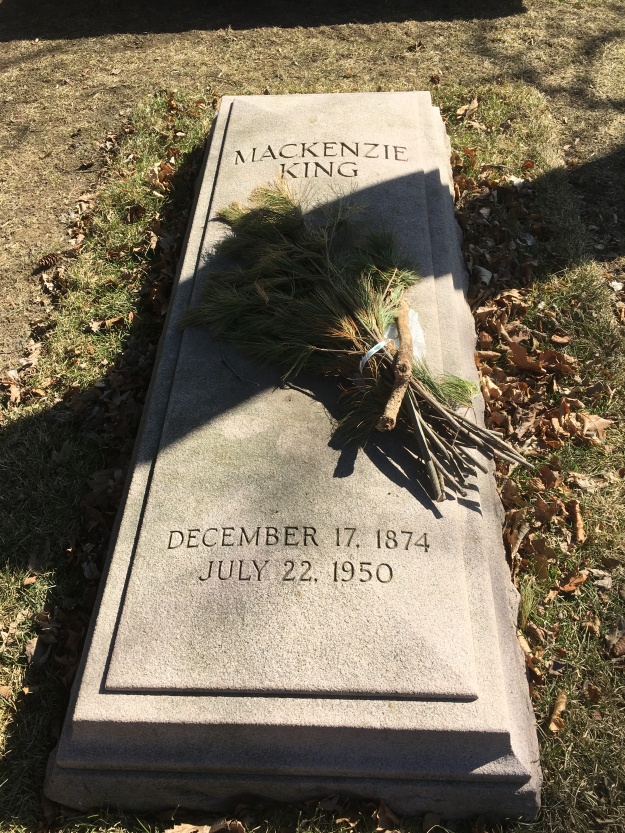 The cemetery has many monuments including this elegant one to the members of the Freemasons.  Today the area around the monument continues to be used to bury those members of the craft of Freemasons who pass away in the city.  The mason tools of square and compass adorn the ball on the top of the monument. 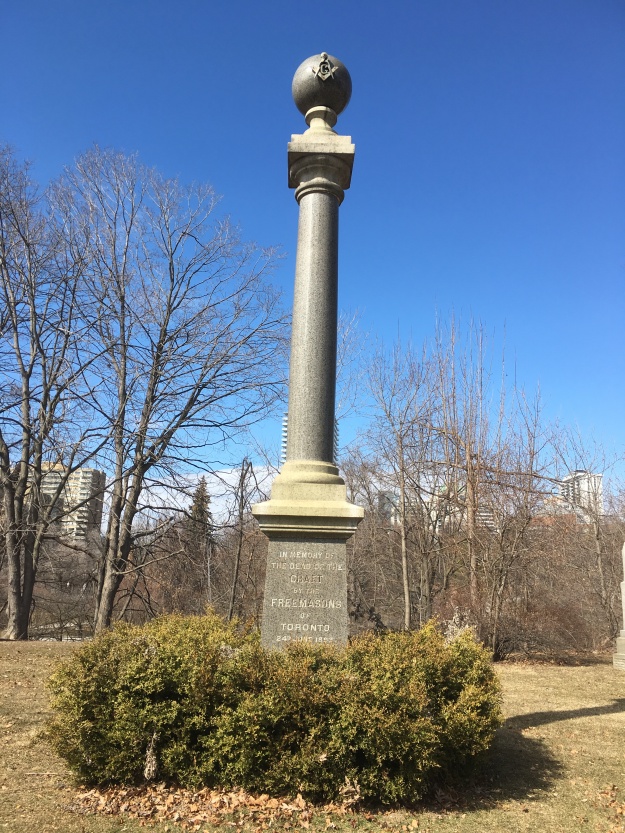 Thousands of people enjoy the solitude of the cemetery every day to jog, walk their dogs or simply take in the quiet and the grand monuments to those who have gone before.