In need of a shorter hike this week we set off to visit The Vale Of Avoca.  We investigated the collapsed ruins of an old saw mill, the eastern abutments of an old bridge and a 90 year old example of recycling as we explored a section of Yellow Creek.  It was 21 degrees early in the morning and quite comfortable, except for the unending mosquito attacks.  Only the female mosquito bites after which they live off the blood while 100-200 eggs develop.  They normally live for up to two weeks or until they land on me, which ever comes first.

We parked on Roxborough just off of Mount Pleasant.  From here the trail goes to the left and follows the creek to the lower portion of the Belt Line Trail.  We turned to the right and entered the Rosedale Ravine which we followed north to The Vale of Avoca, the name given to a section of this ravine.  As we walked north we came to the Canadian Pacific Railway bridge. This intricate concrete bridge replaces an earlier trestle bridge for which the cut stone foundations remain.

In 1837 the Heath Family purchased the north west corner of Yonge Street and the Third Concession Road (renamed St. Clair Ave. in 1914).  They named the area Deer Park and built a hotel where patrons could feed the local deer.  Their lot was subdivided and by the 1870’s the community was well established.  Today the Heath’s are commemorated by a street name. Deer Park extended as far east as the ravine carrying the Yellow Creek, which St. Clair didn’t cross.  In 1888 John Thomas Moore began to market his community of Moore Park which would be constructed between Yellow Creek and the ravine to the east of it containing Mud Creek.  To support his community he built bridges across both ravines and also attracted the Belt Line commuter railway.  Just prior to reaching St. Clair an old abandoned bridge crosses the channelized creek in the bottom of the ravine.  This concrete bridge sits on an earlier stone foundation.

Moore’s bridge across Yellow Creek was built of iron and didn’t follow the alignment of the third concession.  It angled slightly south west and aligned with today’s Pleasant Boulevard.  By 1922 the bridge was starting to become a safety concern and approval was given to build a replacement. It was decided to straighten the alignment of the road and provide for four lanes of traffic and two of street cars.  The new bridge was built over a period of two years and is 509 feet long and 89 feet high.  It opened in 1924 and cost the equivalent of $9M in today’s economy.  The bridge is a steel and concrete triple span bridge.  The picture below shows the steel arches under the bridge as well as three concrete arches at the other end.  The bridge and the valley they span were renamed The Vale Of Avoca in 1973. The name is taken from a poem by Thomas Moore called The Meeting of The Waters.  It is said that Thomas Moore the poet and John Thomas Moore the community builder were related. 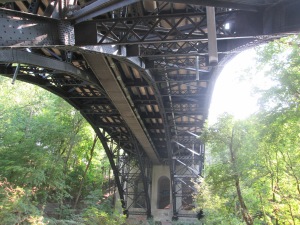 The Toronto Archives photo below shows the bridge looking west toward Pleasant Boulevard. Notice the lattice work iron railings on either side.

When The Vale of Avoca opened in 1924 the old iron bridge was immediately removed.  The iron railings from John Thomas Moore’s bridge were cut up and recycled as fencing along the side of Avoca Avenue.  The Vale of Avoca bridge can be seen in the background. 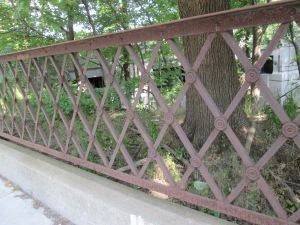 The archive photo below from 1925 shows the work in process of removing the old bridge. 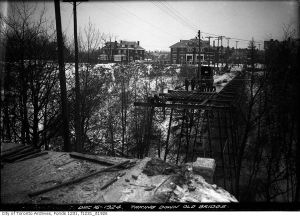 Just north in The Vale of Avoca lie the remains of an early sawmill. The  mill dam created a pond that stretched back upstream flooding part of what is today’s Mount Pleasant Cemetery.  This seems hard to believe looking at the present condition where the cemetery is on such higher ground.  The ravine that formerly held Yellow Creek through the cemetery property has been filled in with ten metres of soil that were excavated when the Yonge subway was built in the 1950’s.  The earthen works of the dam provided the first bridge across Yellow Creek at this location, prior to Moore’s bridge.  Today most of the structure of the mill has collapsed into a mess of shale on an otherwise soil covered embankment.  The horizontal tree in the middle of the picture below is resting on, and perhaps knocking over, part of one wall.  Near the left side of the picture there stands one of the other corners of the building.

In the midst of the ruins of the collapsed mill I found the bottle pictured below.  It is embossed Buckingham Cleaner but bears no other markings.  The seam on the edge ends just below the lip suggesting a date between the late 1880’s and the introduction of the bottle machine in 1906.  Researching Buckingham Cleaner suggested to me that people in Buckingham have no excuse for dirt as you have a lot of cleaning services available.  The original product in this bottle is a little harder to find information about. 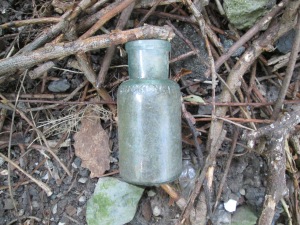 We returned to St. Clair and crossed Yellow Creek on The Vale Of Avoca.  On the east bank of the creek just south of the bridge stand the remains of the abutments and footings for the 1888 bridge.  The original bridge abutment was made of cut stone.  A rectangular slab of concrete near the left of the picture is from a repair conducted just prior to replacement.  The cover photo also shows the former bridge abutment looking out across The Vale Of Avoca.

The common Garter Snake lives in a wide variety of habitats and is completely harmless.   Various species of snakes either lay eggs or give live birth.  The garter snake is one of the species that gives live birth and the female can have as many as 70-80 snakes in a single litter.

The teasel has nearly finished blooming for this year.  A few still have their purple ring of tiny flowers but these are only the ones which get less direct sunlight.  A group or cluster of tiny flowers such as these is known as an inflorescence.  The little flowers are actually specialized leaves known as bracts which bloom in a ring around the middle of the inflorescence and then progress toward the ends of the oval flower head.

The Villa St. Clair was built in 1892 and added to Toronto’s list of heritage properties in 1984.  It has a small tower, or turret,  which looks out across The Vale Of Avoca.

visit us at http://www.facebook.com/hikingthegta

5 thoughts on “The Vale Of Avoca”