The village of Islington was originally called Mimico when it was founded in 1814.  Dundas Street was the main route between York and the western part of Upper Canada. It became an important stopover on the stage coach route that ran along Dundas Street.  The village has been absorbed into the city around it but it’s original charm is being captured in a series of murals along Dundas Street.  The Islington Business Improvement Area (BIA) is a group charged with making the area attractive and preventing graffiti.  In 2004 they began to set aside a portion of the local taxes to be used to create outdoor murals that depict some of the history of the community.  To date there are 26 murals that cover over 25,000 square feet of public art.  Many of the murals were painted by John Kuna although several were painted by Sarah Collard and also Arts Etobicoke.  Each painting takes between 300 and 400 hours of work.

The paintings cover 5 blocks along Dundas Street and they are mostly painted on the sides of buildings.  The first two murals, however, are painted on bridges over Mimico Creek.  These young ladies are singing a welcome to visitors as they enter the community.

This mural depicts golfing in Islington in the 1920’s.  The Islington Golf Club was established in 1923 on the old Appleby Farm.  Notice the ball collector in this painting who is wearing a protective wire cage.

The old Islington Hotel is seen in this mural that depicts Islington in 1912.  The drive shed where horses were stabled can be seen in the foreground and Clayton’s Butcher shop is just beyond the hotel.  This mural is part of a pair that together depict the street view of the town a hundred years ago.

Gordon’s Dairy was a big part of everyday life in Islington.  Their milk wagons, and later milk trucks, delivered dairy products on a daily basis to homes in town.  The dairy was in a building that featured yellow tiles on the outside and had a lunch counter inside.  This mural shows the dairy as it existed around 1940.

The Royal Conservatory of Music had a branch in Islington between the 1950’s and the 1980’s.  This mural features Glenn Gould who was one of the most famous people to come through the conservatory.

This mural depicts a father fishing with his children in Mimico Creek near the old rail bridge. 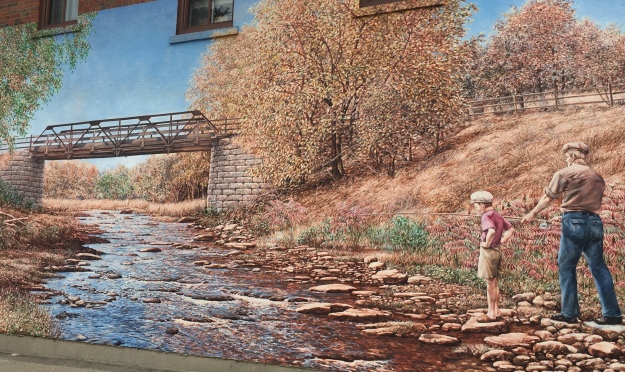 This is my personal favourite of all the murals in the collection and that is why it is also featured as the cover photo for this post.  It depicts the old swimming hole near the mill.  The bathers are dressed in fanciful bathing suits and are climbing on the waterwheel for the mill.

This colourful mural depicts fishing in the creek.  The water below the children with their fishing lines depicts several of the species that were common in Mimico Creek a century ago.

The Guelph Radial Line ran through the community on it’s way between Lambton Mills and Guelph.  The line opened in 1917 and ran until 1931 when it was closed due to the increase in popularity of the personal automobile which made the trip to Guelph along Highway 7.  The radial line ran behind the building with this mural on it.

The Gunn House was also known as Briarly and was built in the 1840’s as a single story regency style cottage.  In the 1850’s it was expanded and given Italianate touches that were popular at the time.  The house was owned by the Montgomery family from 1870 until 1985.  It was demolished in 1989 to make way for some badly needed townhouses.  The house originally stood just east of Montgomery’s Inn. 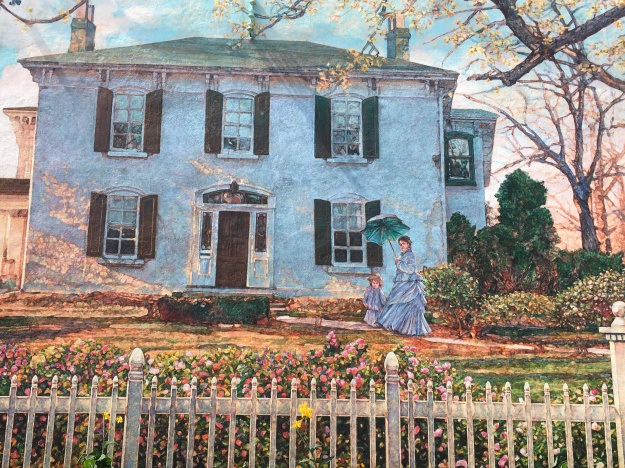 One of the more unique murals is painted on the side of the building that served as the  manse for the Weslyan Methodist Church.  The building has been painted in a manner that appears to have removed the outer wall and allowed us to view the interior as it may have looked around 1888.  The pastor is seated at the table while a committee of women from the church inspect the house with white gloves to ensure that the housekeeping is up to par.

Montgomery’s Inn was built in 1830 by Thomas and Margaret Montgomery.  When Margaret died in 1855, Thomas stopped operating the inn and concentrated on farming the property instead.  The building was sold in 1945 to the Presbyterian congregation who used it as a church from 1946 until 1962.  The building sat abandoned until 1975 when the Etobicoke Historical Society managed to save it from demolition.  It has been turned into a museum and remains a valuable example of Georgian style architecture.

The old community of Islington has been swallowed up by the city but through the display of public art it has managed to preserve the historical charm of a previous century.  This is just a selection of the beautiful artwork and one only need take a quiet stroll along Dundas Street from Islington to Kipling to appreciate the beauty that has been created here.

2 thoughts on “Islington – Village of Murals”