The area of Cedar Grove was first settled in 1790 but it really got going when the Reesor Family arrived and built the first mill on this part of Little Rouge Creek.  Within a few years Cedar Grove had four saw mills, two grist mills, a hotel, post office and general store and a blacksmith shop.  The community continued to prosper until the local wood supply was exhausted and the saw mills were closed down.  The hamlet was bypassed by the railway and a slow decline began.  Today Cedar Grove is part of Rouge National Urban Park and is specifically part of 470 acres known as Bob Hunter Memorial Park.  This park has several trails of which we chose the Reesor Trail.  The Monarch trail is 7.6 kilometres and will have to wait for another day to be explored. The Reesor Trail takes you along the Little Rouge Creek past the site of their mills.  Peter Reesor owned this property and his house was built of local field stone and was completed in 1832. 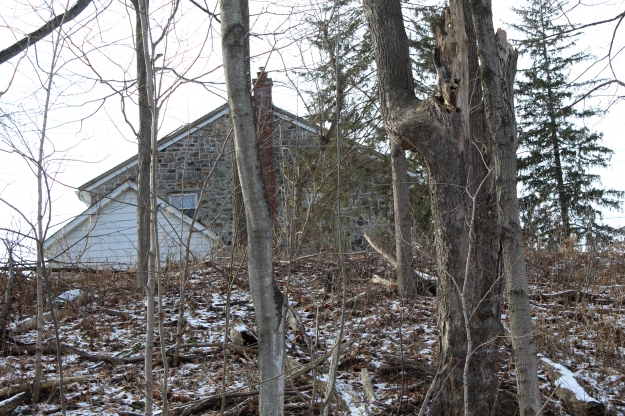 Little Rouge Creek was partly frozen and in some places the open sections were just starting to glaze over.  The thin ice looked like plastic wrap spread over the surface of the water.  Water that is flowing has its potential energy converted to heat energy and thus it resists freezing at the molecular level. 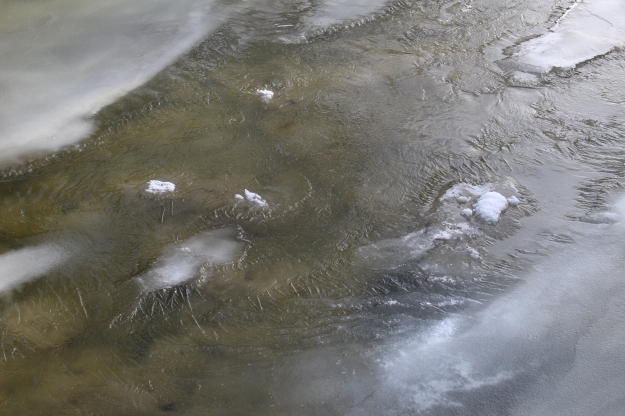 While walking through the trails it is easy to see why the area was named Cedar Grove.  With all the saw mills in the community they would have eventually exhausted the wood supply leading to the closing of the mills.  The areas along the creek have become reforested as their farming potential was limited. 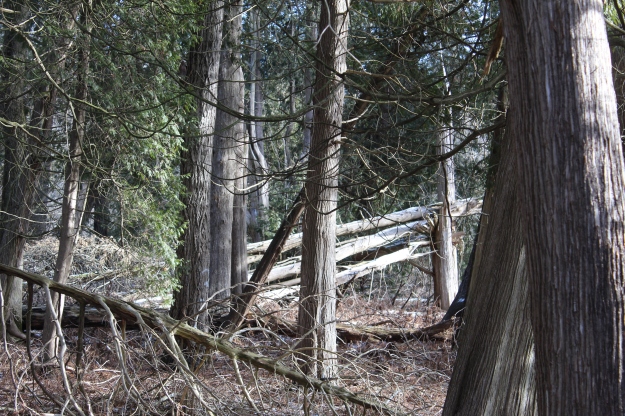 One of the more unique features is this former ring of water.  The last remains of a set of stairs can be seen below where it crossed the ring of water to the large island in the middle.  Many farmers created ponds to water their animals, perhaps that was the purpose of this construct.  A large clay pipe appears to have fed water into the channel. 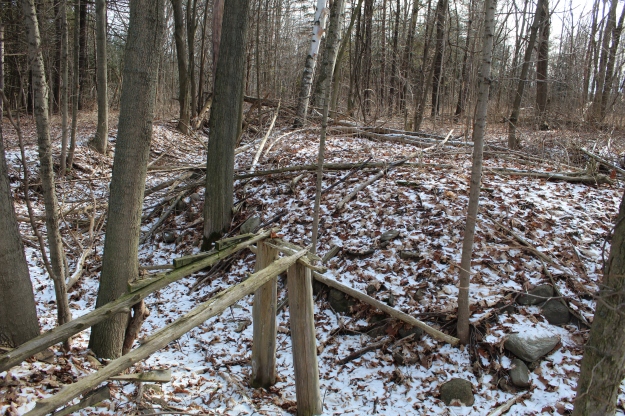 An old well sits a few feet away with a tin bucket that is rusted through.  The well has recently been boarded over.  A smoker or barbecue made of field stone sits a few feet farther along the trail.  Unfortunately, people have stuffed it full of garbage.  Perhaps that’s one of the reasons the well was closed off.

White Tailed Deer do quite well in the GTA.  Most weekends we will either see deer or at least signs of their passing.  A recent study of Rouge National Urban Park suggested a herd of 85 – 95 in the park.  They have several large predators including cougars, alligators, jaguars and wolves, none of which are common in the GTA.  Packs of coyotes have been known to prey on fawns or any animal that is sick or has been injured.  Some would say that this improves the stock, over-all but it doesn’t sound very nice. 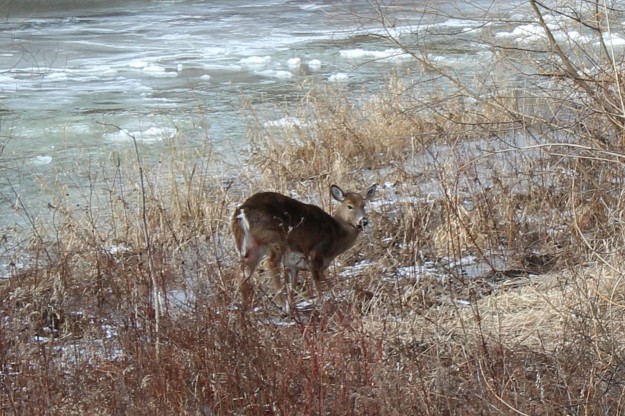 Cedar Grove still retains plenty of remnants of the agricultural past.  Within the park area are two silos, the foundations for a barn and several old fence lines and roadways. 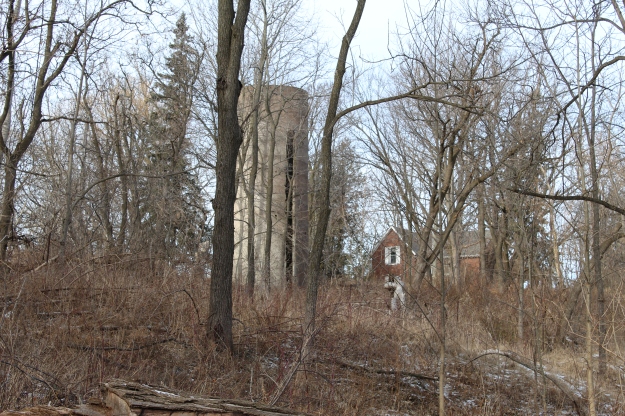 Cedar Grove had three schools over the years beginning with a log school house on Steeles Avenue which was built in 1820.  Around 1850 it was decided to build a larger school one concession north.  A frame building was constructed on the north side of 14th avenue but it was replaced in 1869 with a brick building across the road.  This school had a gallery inside where adults could come and sit in on the teaching so they could learn as well.  The school lasted almost 100 years but closed in June of 1966 and the building now serves as Cedar Grove Community Centre.  The original slate chalkboards and gallery have been left in place as part of the heritage of the building. 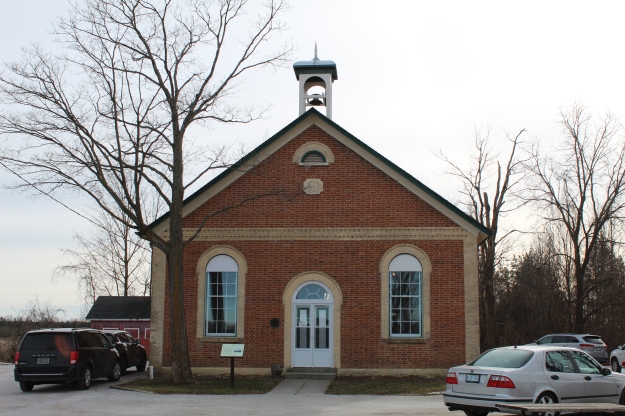 The community had several mills which have since disappeared.  One which survives in a couple of ways is Lapp’s Cider Mill.  The building is the last of the large industrial ones in town but the inner workings have been removed.  They are now in Markham Museum in their working cider mill.  The new mill is housed in the former Lapp drive shed that was on another of their properties south of the creek.  The Lapp blacksmith shop was also on this lot and has been moved to the Markham Museum as well.   There will be a separate mini-blog to feature more pictures and details of this heritage building. 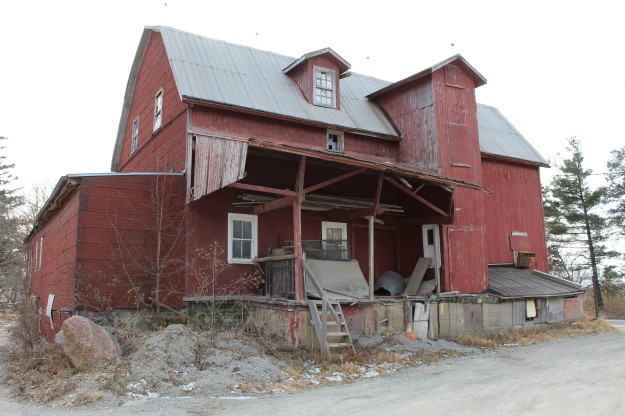 Beside the mill is an example of Edwardian Classicism architecture.  These four-square houses had two bays on two floors.  They also typically had a large dormer with two small windows in the attic.  This home is also on Lapp property and was likely added after 1910 at a time when the mill was still prosperous. 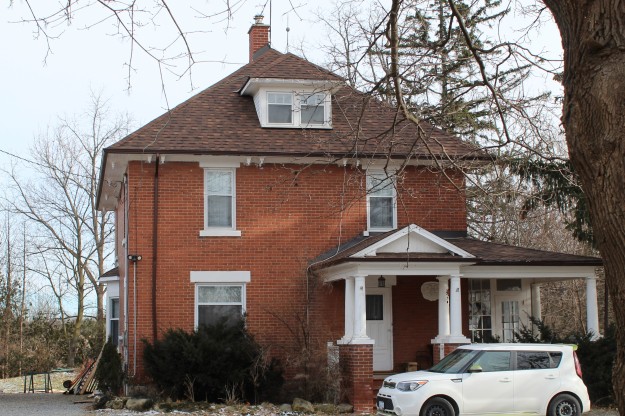 The Cedar Grove Mennonite congregation officially formed in 1867 but they had been a presence in the community since Peter Reesor and family had arrived in 1804.  His mill lane ran from Reesor Road along the Little Rouge to the mills beside the creek and the house which still stands on the hill.  Samuel Reesor had erected the first building in 1861 but it was mostly used for funerals.  They were formally organized in 1912 and now have a newer building than the one shown below in which they house the Rouge Valley Mennonite Church.  In 1913 a deacon named Samuel G. Reesor died in the pulpit while praying 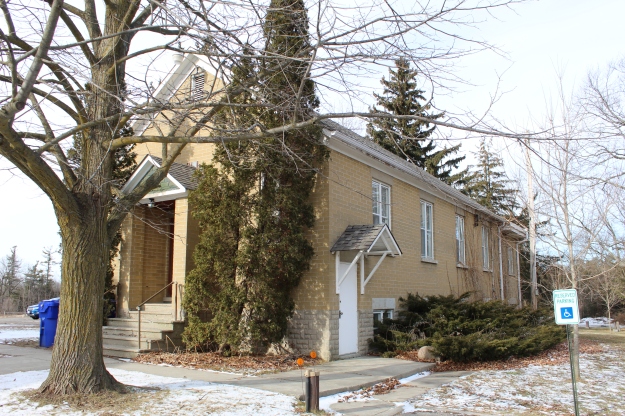 In 1824 the first burial took place in what would become Cedar Grove Cemetery.  Many of the early settlers that built the community lie here including many members of the Reesor family.  The wrought iron arch was donated in 1966 by Elsie and Ira Reesor in honour of their parents. 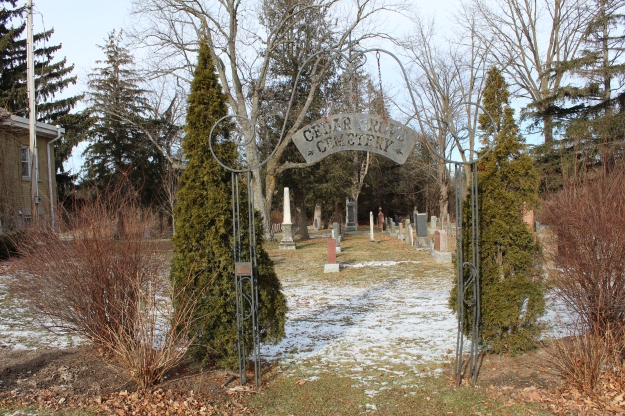 Across the street from the cemetery stands the skating rink known as Cedarena.  It continues to wait for skaters that haven’t shown up since it was closed four seasons ago.  More pictures and a detailed story can be found in our post Cedarena. 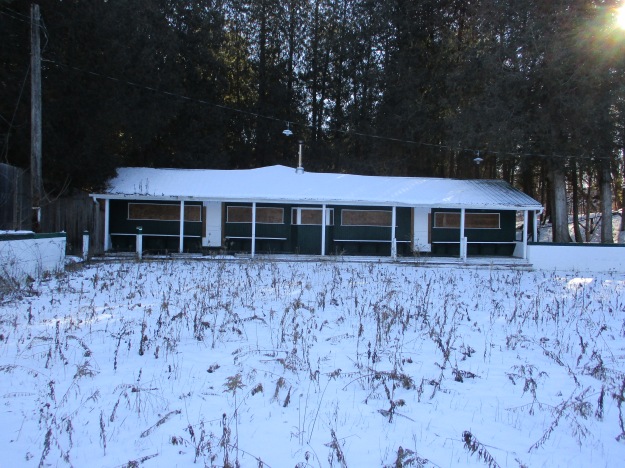 Bob Hunter Memorial Park and Cedar Grove combined to make an interesting hike and we never had the chance to check out the 7.6 kilometre Monarch Trail.  I guess we’ll likely be back some day.

12 thoughts on “Cedar Grove – Ghost Towns of the GTA”