Trinity Bellwoods Park is one of the busiest in the city with thousands of visitors on a sunny summer day.  It also has an interesting history as the home of Trinity College from 1852 until 1925.  Not much remains today to mark the history of the site except the old gates on Queen Street.  They can be seen in the cover photo.

Trinity College was founded in 1851 by Bishop John Strachan to be closely aligned with the Church of England.  Strachan had made a name for himself as the civil leader of York when the British abandoned the town following the Battle of York in the war of 1812.  The gates bear his name and the Roman numerals MDCCCLI for 1851. 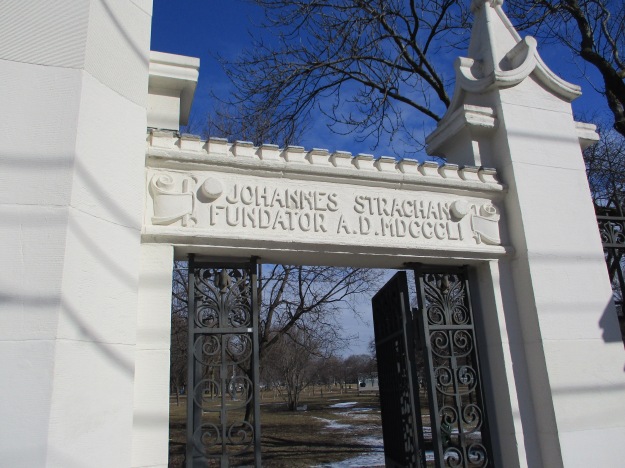 The building was Gothic Revival and operated from 1852 until the school relocated with the University of Toronto in 1925.  The buildings then became city property and were demolished in the early 1950’s.  The archive picture below shows the college in the early days. 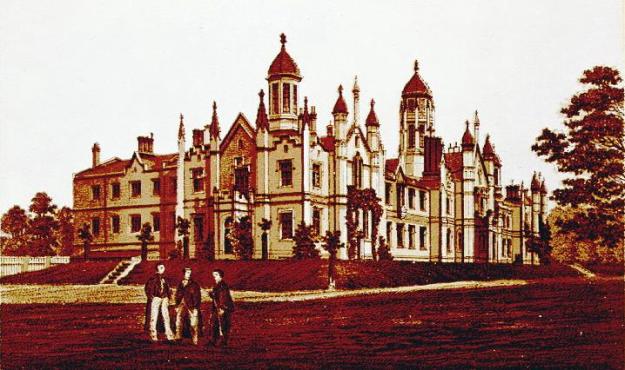 Today there are walking paths among the many mature trees in the park.  There are tennis courts, children’s play areas and an outdoor skating rink.  There’s also summer picnic areas and lots of off leash areas for dogs to play in. 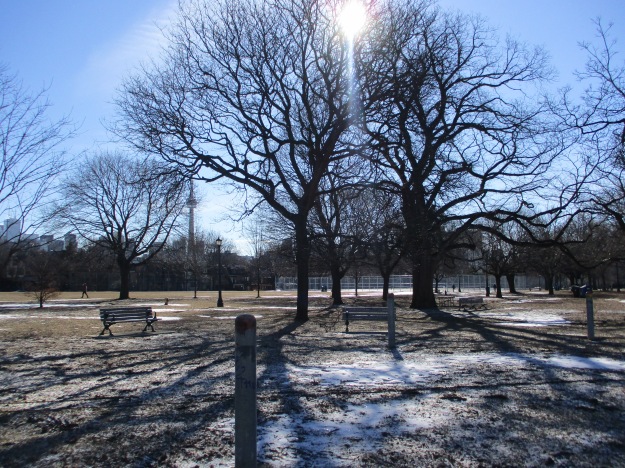 A paved trail leads down into the lower bowl where Garrison Creek used to flow. 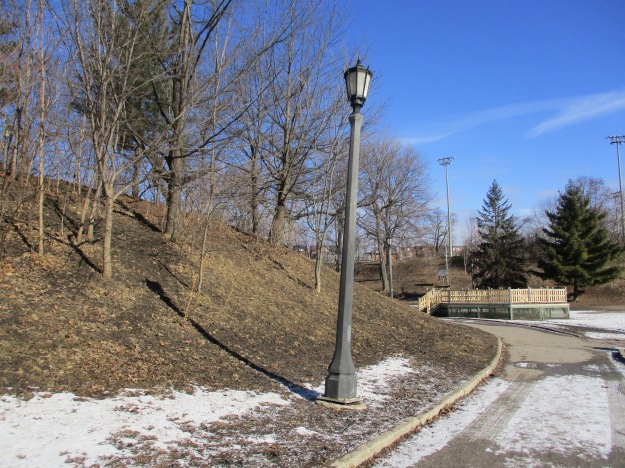 Female students began to attend Trinity College in 1884.  By 1888 the female student population was still only 2 but it was decided they needed a dedicated building.  Euclid Avenue was the first location for the new facility but after moving a few times it settled in 1903 into a new building on campus.  This building has had several uses since 1925 including the current role as John Gibson House.  It is the only remaining building from the Trinity College campus. 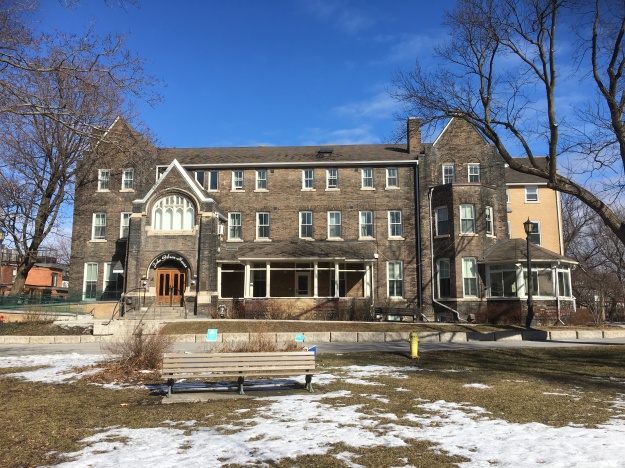 Although St. Hildas opened for students in 1903 the cornerstone shows that construction began in 1899. 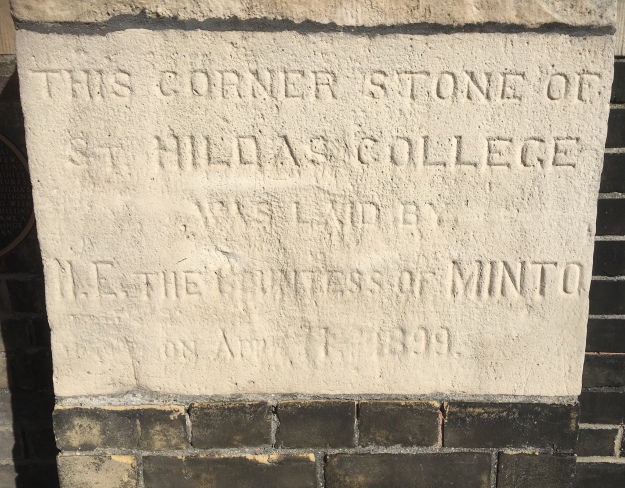 From behind St. Hildas College you can see the rise of land that marks the sight of a buried bridge.  This artificial hill has become a popular tobogganing slope. 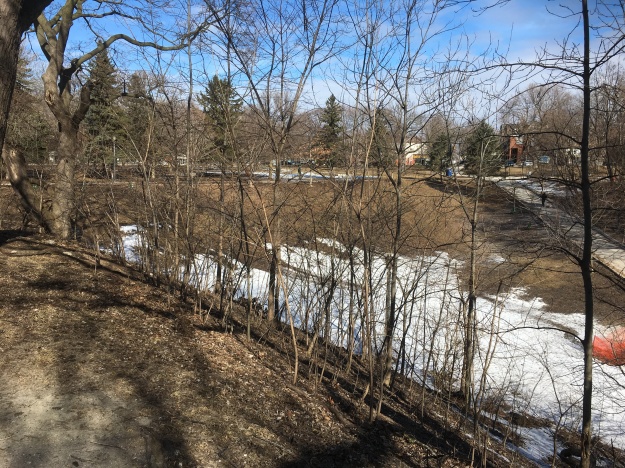 The Crawford Street Bridge was built in 1915 to replace the 1884 wooden bridge that previously crossed Garrison Creek.  The triple span arch bridge was influenced by designs of R. C. Harris, Public Works Commissioner.  It bears a lot of resemblance to the Bloor Viaduct, a contemporary Harris design.  This archive photo is from 1915. 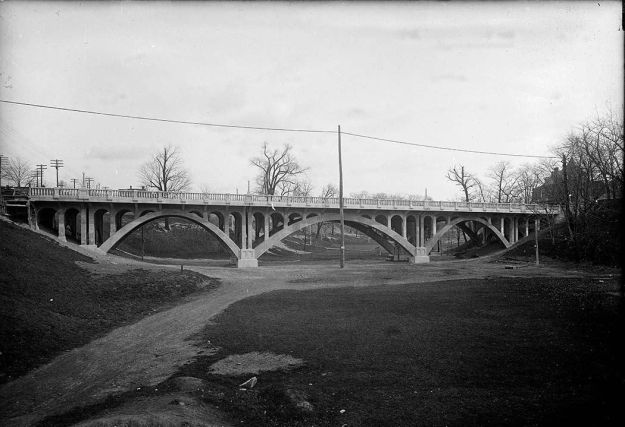 By the 1880’s the city was expanding westward and Garrison Creek was already badly polluted.  A solution was put forth to bury the creek in a sewer pipe.  This got approved and Garrison Creek disappeared from the surface in 1884 when the previous bridge was installed.  In the 1960’s the city was digging the Bloor subway line and looking for places to dump the soil they were removing.  It was decided to fill in the ravine on either side of the Crawford Street Bridge saving upcoming maintenance costs on the bridge.  Maintenance work in 2004 has identified the former course of the creek as well as illustrating the types of fish that used to swim through here.  These included Pumpkinseed, Brown Bullhead, White Sucker, Bowfin and Northern Pike. 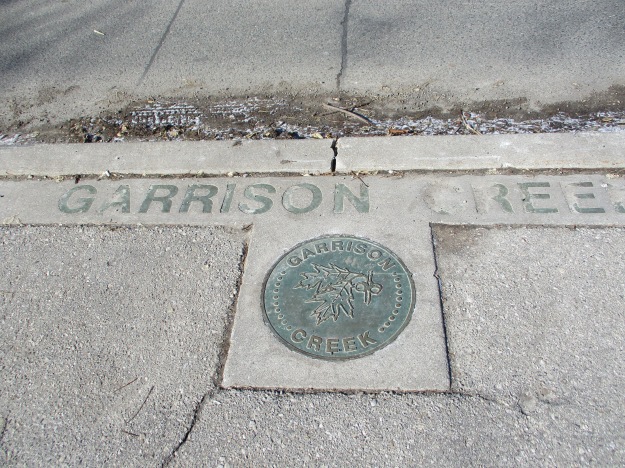 North of Trinity Bellwoods Park at Harbord Street there is a second buried bridge on on the former watercourse of Garrison Creek.  The Toronto Archive photo below shows the bridge nearing completion in 1910. 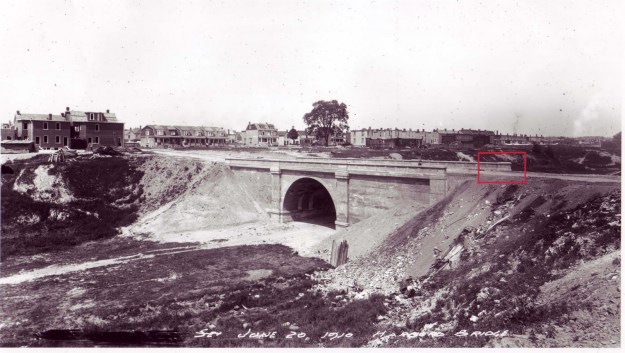 This bridge was likewise buried with subway diggings except that in this case they left the railing on the north side. 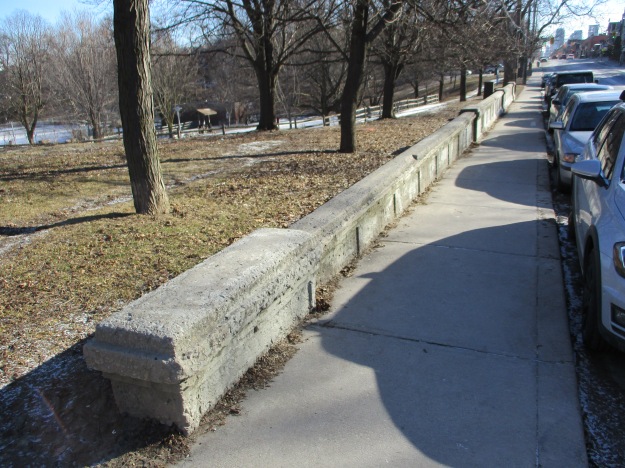 Looking down into Garrison Creek ravine you can get a feeling for the way things used to be.  The people in the dog park are standing above the buried creek where it runs through the old sewer pipes. 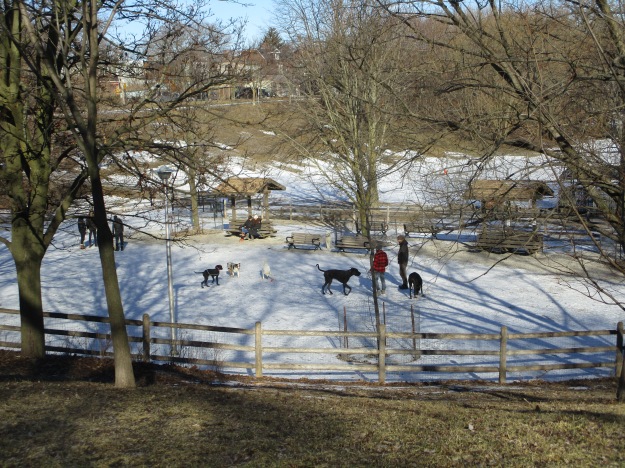 It really is too bad that the city of the 1950’s didn’t put more emphasis on heritage because we might still have the grand old building of Trinity College.  Perhaps it could have been turned into the community centre instead of building a new one.