When the completed Queen Elizabeth Way opened in 1939 it had the distinction of being the first super-highway in Canada and the also first one to be fully illuminated at night.  (Although that was delayed until war-time electricity restrictions were lifted in 1945.)  Several bridges were built over the major ravines and the one over the Credit River in Mississauga has been given an historic designation. In April 2019 the Provincial Government announced funding to rehabilitate the bridge and build a second one directly to the north to allow for increased traffic flow.  By November they had decided to demolish the bridge and build two new ones in a modern box design.  Public outcry has resulted in the recent announcement that the government will only seek tenders that include the preservation and restoration of the historic bridge. 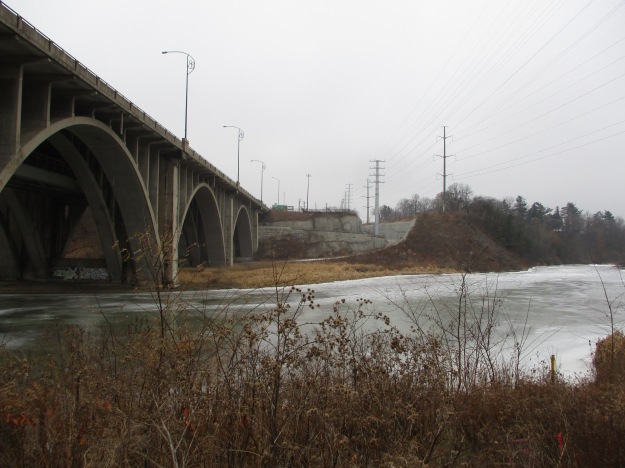 I decided to stop by and see what the bridge looked like and get some pictures in case the ongoing flip-flop continues and we end up without this structure.  It can be most easily seen from Stavebank Road north.  The bridge was built in 1934 and was partially financed under the New Deal that was a government spending program intended to spur the economy during the Great Depression.  The bridge is 840 feet long with seven spans and is historic for its Art Deco design.  Also significant is the fact that the highway was commissioned by the king and queen during the first ever visit to Canada by a reigning monarch.

The bridge, along with the highway, was officially opened on June 7, 1939 by King George VI and Queen Elizabeth.  Initially conceived in 1931, the highway was simple and intended to relieve congestion on Dundas Street and Lakeshore Road.  The new road would run between the two and be known as Middle Road for that reason.  This early version of the highway contains the historically significant Middle Road Bridge.  With the election of Mitch Hepburn’s Liberals in 1934 the plans were altered significantly in favour of a superhighway like the autobahns being built in Germany.  This resulted in the first cloverleaf in Canada being built for the interchange with Hurontario (Highway 10).  The Middle Road section of the highway opened in 1937 and was the 39 kilometres between Highway 27 and Burlington which included this bridge.  This picture features the view downstream.

The view looking north up The Credit River from under the bridge.  Much of the eastern side of the river is wetland and marsh through this reach.

There is a steel structure that has been installed between the main arches of the bridge and dates to the 1960 addition of two extra lanes in the middle of the bridge.  This allowed the highway to expand from four lanes to six.

The bridge has been maintained several times including 1977, 1987 and 2014 but the weather and road salt is getting at it in several places again.  This looks like another opportunity for some patching of the decay.  There’s  few cavities but no root canal or extraction appears to be warranted.

Part of the restoration will include replacing the road deck which is starting to rust in a few places. 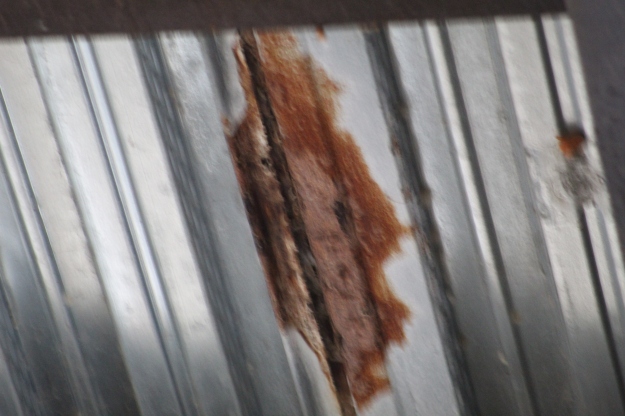 This Ministry of Transportation image shows the twin box design bridges that we almost got at this site.  It would seem that the new bridge on the north side of the existing one may use this design as it is a current favourite with the government. 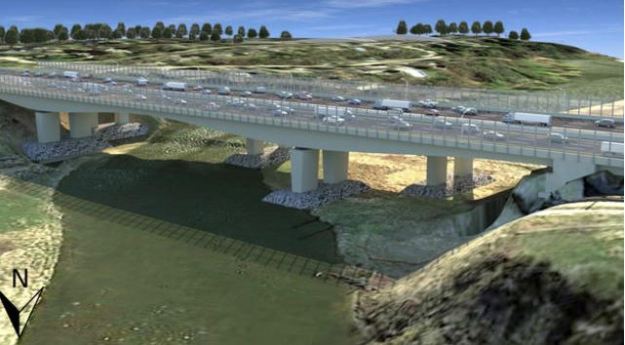 The architecture of the bridge is interesting in that the supports for the arches have their own arches included.  No such Art Deco design elements would be included in a replacement bridge.

The bridge features some interesting lamp posts with the letters “ER” in the iron work.  This is Latin for Elizabeth Regina, or Queen Elizabeth.  It would be easy to conclude that this refers to Queen Elizabeth II, our current monarch.  However, she was only a 13-year old princess when and it was opened.  It was actually named for King George VI’s wife whose name was Elizabeth.  She was later known as the Queen Mother and Queen Elizabeth II is her daughter.  The government plan for the demolition of the bridge would have seen the ornate lamp posts preserved and re-installed somehow in the new structure.  Fortunately they can be preserved in their current position on the rehabilitated bridge.

Each day over 165,000 vehicles pass over this bridge but apart from the lamp posts most of them will never see the architecture of the bridge.  So, why care about a design that only a few fishermen and local residents will ever see?  The issue has far reaching implications because once heritage structures start to be demolished for economic reasons the entire designation system will become powerless to protect our remaining history.