It was one of the first really nice Saturdays in some time, although a little colder than most this winter, with the sun shining brightly.  We parked for free at Humberwoods Arena and hiked north along the Humber River.

January 10, 2020 saw record amounts of rainfall as a storm delivered an entire months worth of rain in 24 hours.  Flooding was widespread and we saw signs of debris stuck high up in the trees along the sides of the Humber River.  The picture below shows how high the water was relative to the pedestrian bridge across the river.  Grasses and small branches are stuck along the side of the road deck of the bridge.

The Humber River along with the Don and Rouge Rivers provide nearly continuous green strips from Lake Ontario into the less developed areas north of the city.  These natural corridors provide space for wild life to move through the GTA.  A pair of cardinals was passing through and the female sat still long enough to pose for the photo below. 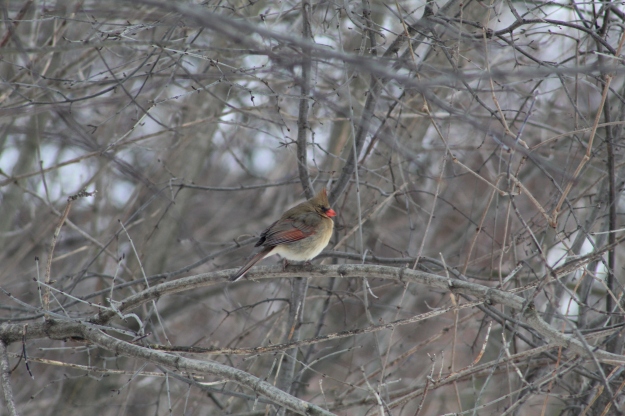 Someone has hung a number of small birdhouses in the trees in Humberwood Park.  They are probably a good idea but I’m not so sure about all the string that was used to tie cones up as well. 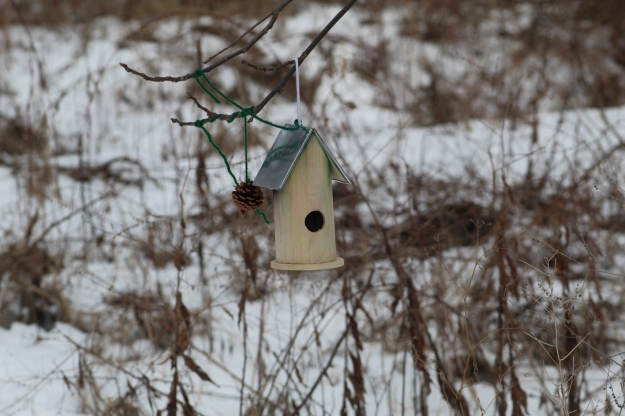 The male Northern Flicker can be identified by the red patch on the back of the head and the speckled pattern on the belly.  They are the only member of the woodpecker family that migrates in the winter.  Toronto is in the northern portion of their year-round range and birds north of here will migrate south during the winter. 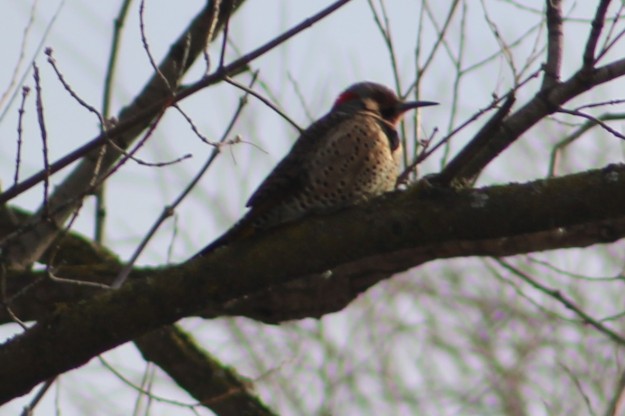 We had the pleasure of watching a seagull pecking at the neck and wings of a red-tailed hawk while in flight.  This behaviour is known as mobbing and is done by smaller birds attempting to drive predators out of their territory.

Anne Schneider an artist from Owen Sound, created 10 giant nests that replicate the types of nests used by birds that are common to Toronto parks.  The nests were originally displayed at City Hall in May of 2006 before being permanently installed in Humberwoods Parklands.  Several of the nests no longer exist and others are in poor condition. 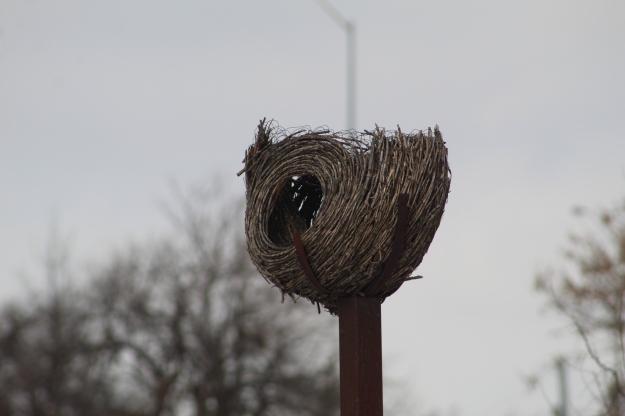 The piece of artwork that simulates bank swallow nests is still in pretty good condition.

In the northern section of the park the nests are replaced with a series of metal sculptures that represent wildlife that is common to the local ravines.

Some of the metal sculptures are rusting badly but I like this one where the baby bird is waiting for food to be dropped into its mouth.  The pole that it has been mounted on has a couple of fresh holes from what appears to be a pileated woodpecker.

Several pieces of the artwork can be seen in this picture but there are also a few posts that are now empty.  Some of the mounting places have rotted allowing the steel pieces to fall and then be removed from the area.  When we visited the area in 2014 there was one steel sculpture that looked like a bird nest but made with many sharp pieces of steel.  At the time there was a dead red-tailed hawk that had been skewered when attempting to land in what appeared to be a nest.  That piece, along with the dead bird, has thankfully been removed.

Just below the Claireville Dam the Humber River was full of Canada Geese that have decided to stay around for the winter.  This year we have seen more geese and robins than usual.  Perhaps they knew that the winter was going to be milder than average.  The goose in the lower left of the picture appears to have only one leg which it angles underneath itself for balance.

We followed the road north from the top of the dam to look at the closed portion of Indian Line.  The story of the Claireville Dam and Indian Line can be found in our post Claireville.