It was cool, at least to start with, at only 17 degrees.  We parked in the Humberwoods Community Centre and hiked north on the west side of the Humber.  Just south of Finch Avenue is a little park that has been developed as a bird flyway.  There are dozens of nests and things to attract birds and this is a great little park for bird watchers.  In the picture below are a couple of the many odd shaped nesting places that have been constructed there. 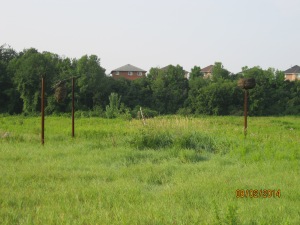 The groundhog is a member of the Marmot family and is a type of ground squirrel.  They are one of the few species that enter true hibernation and they sleep until March or April. In the wild in Ontario they are always sleeping on groundhog day, and therefore, actually never see their own shadow.  After mating in the spring the pair stays together until the young are about to be born in April or May.  The male then leaves the burrow and the parenting to the female.  She gives birth to between 2 and 6 hairless blind kits. The young groundhog below was scared of us but didn’t try to run away.

It was early in the morning and the dew sparkled on the spider webs.

When the 427 was built plans were already in place to expand the highway by adding lanes between the North/South lanes.  As we went under the highway we could see the supports for the expansion that were built at the same time as the rest of the bridge.

Claireville Dam was one of the flood control dams built in response to the damage caused by Hurricane Hazel.  in 1959 The Plan For Flood Control and Water Conservation was released.  Since 1960 over 40,000 acres of land has been acquired and 3 of the originally proposed 15 dams have been built.  Claireville dam was the first one, built in 1964.  The dam allows the Conservation Authority to collect water from heavy rains and release it slowly after the storm has passed. 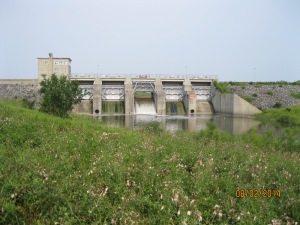 Indian Line started off as an Indian trail along the shore of the Humber river.  When the land survey was made it was part of the border between Peel County and York County. When hwy 427 was extended north it became part of an off and on ramp to the highway. In 1992 when the highway was further extended it was closed off and abandoned.  Parts of it now form hwy 50 north of Steeles ave.  Indian Line campground used to be accessed from just south of the river off of this road but is now accessed off of Finch Ave.  The picture below looks up the old roadway to the bridge that crosses the CN tracks.  When this bridge was built in the 1960’s this was an important road and it was made wide enough for 4 lanes to be opened one day. 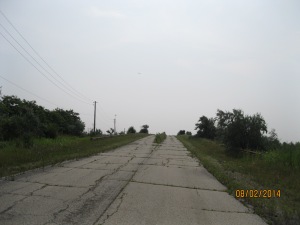 Claireville was a community that started in 1850 on the estate of Jean du Petit Pont de la Haye at the intersection of Steeles and Indian Line.  He named the town after his daughter Claire.  A third road ran diagonal through the property and was originally known as Claireville Road because that was the location of the toll booth along the road.  Early roads in Ontario were known for their mud (an early nick-name for Toronto was “Muddy York”) and were covered over in planks as soon as possible.  Plank roads required continuous maintenance and this was paid for through tolls collected by the road keeper. A horse and rider would pay 1/2 pence and 20 hogs or sheep cost 1/2 pence.  A wagon was 1 pence if drawn by a single horse but 1 1/2 pence if drawn by two.  When the Claireville road was planked a toll house was established.  Of all the houses which once stood in this town only a few remain.  There is a white two story house which remains and this was originally the toll house.  Since the 1950’s the town has declined and is now mainly an industrial neighbourhood.  The picture below shows the town as it was in 1947.

This picture has nothing to do with this hike but is a follow-up to last week’s move.  As I was cleaning the apartment I swept deep under a baseboard heater and out popped a little round black disc.  At first it didn’t look like anything but I could see that there was some writing on it.  I placed it in Coke for a few minutes to remove some of the gunge on it.  King Christian 7 ruled Denmark from 1668 to 1808.  The 1 Skilling Danske coin I found is in poor condition but still has a value of about $10.  Thank You to the previous tenant in my unit who lost this coin.  Don’t worry, it has found a good home in my collection.  It is interesting to me that Toronto was founded in 1796 at which time this coin was already 25 years old.  I find a lot of older things out hiking, but the oldest one so far was right under my heater for the past 8 years!