It was sunny and warm, a beautiful day for a hike.  I parked at the top end of Pottery Road in the Loblaws parking lot.  I also hiked along the old abandoned roadway of Pottery Road but that will have to be described separately due to length.

When Governor Simcoe arrived in 1793 to build his town of York (Toronto) he needed a large supply of sawn lumber.  The only other mill at the time was the King’s Mill (now Old Mill) on the Humber River.  As it was a government run mill it was unreliable and went through many changes of millers due to crazy rules that made it impossible to recoup your investment.  Simcoe brought Isaiah and Aaron Skinner in and granted them 200 acres of land in the Don River valley.  They built a sawmill in 1794 and a grist mill in 1795.  The Skinners sold the mills to Parshall Terry in 1798 and when he drowned in 1808 the mills passed to Timothy Skinner who ran them until he was killed in the war of 1812.

Terry built the older portion of the Terry House, that part at the back which was made of logs.  The front part with the two chimneys was a later addition.  Taxes were levied on the number of chimneys you had, so having three fireplaces was a luxury. 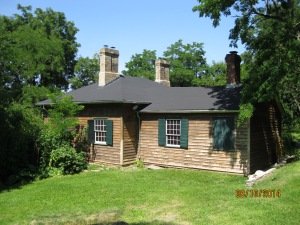 This picture shows the back end of the paper mill.  The mill race ran down the left side of the mill and this is where the mill wheel would have been.  The tall chimney was added about 1900.  In the cover photo the chimney is contrasted with the urban towers of Toronto in the distance.

In 1822 Colin Skinner came into a partnership with the idea of chasing a bounty for being the first paper mill in Upper Canada.  They didn’t win the bounty but did become the first mill to install paper making machinery.  Eventually the paper mills spread into three locations and became a major industry in early Toronto.  When the mills closed down they were used for awhile to stable the horses from the brick works.  Later they were the home of Whitewood’s Riding Stable.  The word “White” remains on the side of the old mill.  Also, note the old mill stone mounted on the lawn just outside the door. 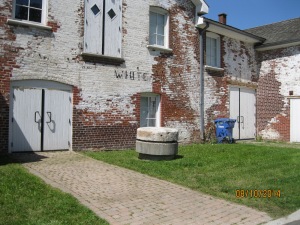 When the Don Valley parkway was built the Don River was re-routed so that the large curve that used to pass through Todmorden and power the mills was cut off by the berm of the highway.  The river was straightened to run along side the railway line.  The part that used to flow under the bridge still has water in it and backs up from the river down stream when there is flooding, providing some flood control.  The picture below is taken from the bridge looking east.

In 1821 the mills were sold to Thomas Helliwell Sr. and John Eastwood.  Helliwell Sr. came from Todmorden in England and it is because of him that the name of Don Mills was changed to Todmorden Mills.  One of the first things Helliwell did was erect this building as the brewery and distillery.

Thomas Helliwell Jr. built this house in 1837 out of bricks made from clay he dug out of the hillside behind the house.  The bricks were not baked but only sun dried and so they would crumble easily.  For this reason a protective coating of stucco was applied.

The portion of the house at the rear has the notable characteristic of no windows breaking the roof line that suggests it was originally a log home.  The two story brick and stucco addition on the front was likely framed and then veneered with bricks and stucco.

The old flag pole still stands on the front lawn of the Terry House.  Note the wooden cradle mount at the bottom of the pole. 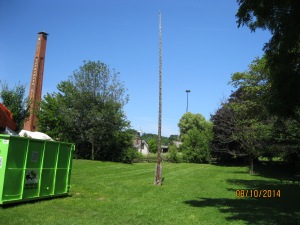 When Thomas Taylor died in 1880 the mills were handed over to George Taylor’s son’s who added the Don Valley Pressed Brickworks to their empire in 1891 just across the river from Todmorden.  The Don Valley Brickworks produced many of the bricks for the construction of Late Victorian Toronto.  Broken or defective bricks were dumped in the valley all around Todmorden.  The road leading to the bridge over the former Don River is made of bricks but is itself built on several feel of broken bricks.  The blue line on the bricks in the picture below shows the one time bank of the don River.

A little up stream is old Todmorden dam.  This is a very quiet place to just sit and contemplate the people who made this city out of the woods around them.

The Don Station was built by the Canadian Pacific Railway in 1896 near Queen Street and the Don River.  Between 1969 and 2008 it was on display at Todmorden before being moved to it’s new home in Roundhouse Park.