Toronto has 5604 kilometres of roads and 9500 streets, according to Transportation Services.  The city covers over 630 square kilometres and within that area, there are only a few kilometres of abandoned roads.  Hiking the GTA has been able to explore over a dozen of them and in this post we provide links to the various stories.  Hopefully, you’ll be able to get out and explore one or more of them.

Indian Line started off as an Indian trail along the shore of the Humber river.  When the land survey was made it was part of the border between Peel County and York County. When highway 427 was extended north it became part of an off and on ramp to the highway. In 1992 when the highway was further extended it was closed off and abandoned.  Indian Line campground used to be accessed from just south of the river off of this road but is now accessed off of Finch Ave.

Pottery Road likely started off as part of an east-west Indian trail that crossed the city along the present route of Davenport Road.  Today only about a third of the original Pottery Road remains.  When the Bayview extension was built in 1959 Pottery Road was cut in two and the portion that climbed the hill along the Cudmore creek was cut off and abandoned. 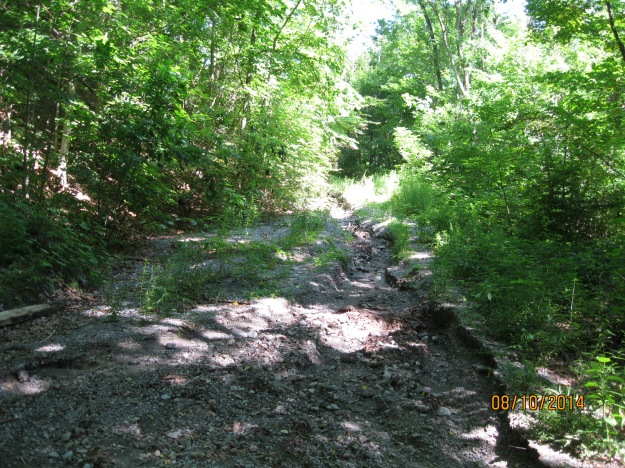 Seen on historic maps since at least 1890, Milkman’s Lane is an abandoned roadway in Rosedale that now serves as a pathway connecting one of Toronto’s wealthiest communities with the Rosedale Ravine, the Don Valley Brick Works and the Lower Don trail system.  Milkman’s lane ran down the side of Osler’s property and carried traffic into the Rosedale Park Reserve.  Park Drive made its way through the bottom of the ravine.  The property belonged to Thomas Helliwell in the 1820’s and provided access through Park Drive to his mills at Todmorden.

Post Road was formerly part of a series of trails that the wealthy estate owners on Bayview Avenue used for equestrian pursuits.  When the planned community of Don Mills was started in the 1950’s the crossing over Wilket Creek was removed and a section of road was abandoned. 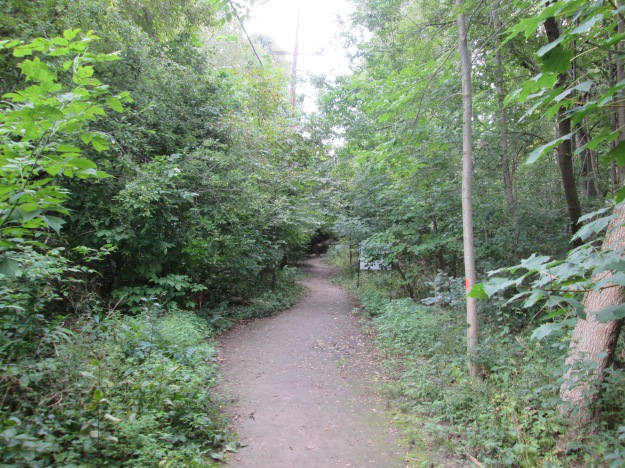 Passmore Avenue was never opened as a continuous road but it has become even more fragmented with sections having been closed for decades.  This post hikes through those sections that were once opened but are now abandoned.  The picture below shows the former crossing over Petticoat Creek. 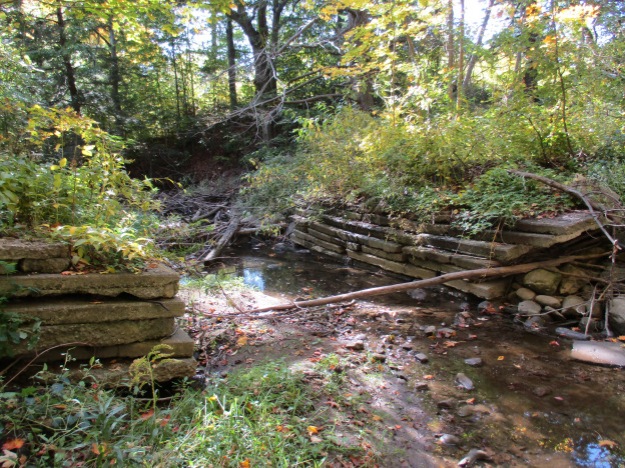 Middle Road got its name from the fact that it ran in the middle between Lakeshore Blvd and Dixie Road.  When the QEW was opened it replaced Middle Road with its narrow single lane bridge.  Middle Road Bridge can be seen in the picture below.

The Toronto Islands had been home to over 8000 people in the 1950’s when the city decided to remove the residents and turn the islands into a park.  The main roadway across the island was Lakeshore Avenue and it ran the full length of the island along the lake coastline.  The road now serves as the trail through the islands and today a boardwalk has been built along part of the old roadway.

In 1819 Jacob Cummer built a saw mill on the East Don River.  To allow people to access his mill he built a road along the north edge of lot 22 from Yonge Street to Leslie Street which we call Cummer Road today.  A grist mill was built to the north on lot 23 and a woollen mill was added as well. When the surrounding farmland was developed the one-lane bridge on Cummer Road was restrictive and a new piece of road and a four-lane bridge were built.  A section of the old road was cut off and abandoned.

Until the 1970’s Eglinton Road wasn’t a continuous strip of road in spite of being the Base Line from which the townships were laid out.  When the road was extended and completed the tail end down the hill was left abandoned.  Today it is beocming grown over with small trees.

In 1929 Bayview Avenue got a new bridge over the West Don River.  The old road alignment down the ravine and across the single lane bridge was closed and forgotten. 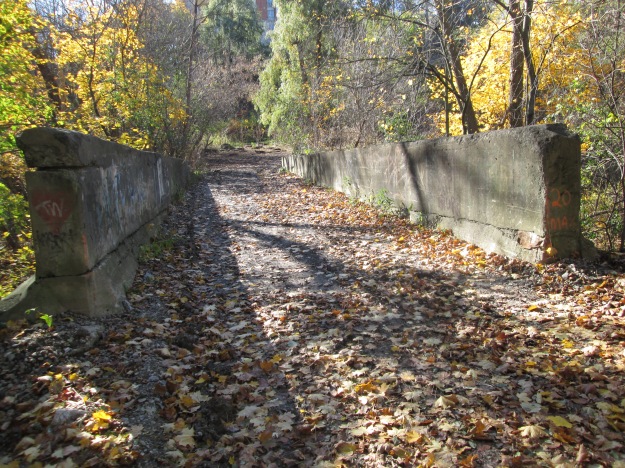 The Gore and Vaughan Plank Road Company was established in 1855 to build a plank road along Dufferin Street. Plank roads were used to improve muddy conditions and were later replaced with asphalt or crushed stone surfaces.  When Dufferin Street was straightened and widened across Dufferin Creek and through Finch Avenue the plank road was left to rot in the ravine.

An old roadway used to install erosion control along the Scarborough Bluffs has been turned into a linear park known as South Marine Drive Park.  It runs for several kilometres along the south edge of the bluffs.

In 1926 The Hospital For Sick Children was looking for a country location to build a satellite facility.  They found a location at Finch and Islington.  Although this is not a public road the long laneway has become a piece of abandoned road.

Google Map links are provided in each of the stories.