Silvercreek Conservation Area was, at one time, home to a village of Iroquoian longhouses. They hunted and farmed the area along the edge of the escarpment for generations before the arrival of Europeans in the area.  William McClure bought the land in 1854 and started to clear it for a farm. His first chore was to cut enough wood by hand to build a sawmill.  From there the log cabin, barn and grist mill soon followed.  To investigate we parked on the 10th line where there is free parking for the Bruce Trail.  The trail runs to the east into Terra Cotta Conservation Area and to the west into Silvercreek Conservation Area.  Entering the conservation area on the Bruce Trail proved a bit of a challenge due to the wet conditions. In the picture below, the trail is a flowing creek while further along, it turned into a mess of mud.  Dry footwear with good treads is as critical at this time of year as it is during the winter months.

Marsh Marigolds also go by the name of cowslip although what they have in common with the lip of a cow is unclear.  Marigolds like marshy ground but can also grow where it is wet for only a few weeks of the year.  They flower early in spring and are related to the buttercups that they resemble.  Although the whole plant is considered an irritant, the leaves can be boiled and eaten like spinach.

The trail becomes much less muddy, but not less tricky when you reach the stone path. The limestone along here has been broken up and cut with deep fissures by karst activity.  The caution here is that some of these stones move as you step on them.

A small guardrail protects a lookout point along the ravine.  Hiker graffiti has been left on the railing. 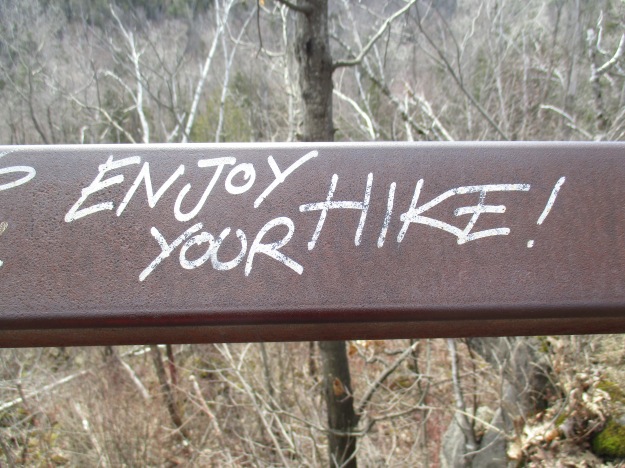 Several turkey vultures were circling overhead.  Turkey vultures are protected under the Protection of Migratory Birds act in Canada and similar legislation in Mexico and The United States where a fine of $15,000 and six months in jail can be levied for killing or possessing one.  This is in spite of the fact that they are considered a species of least concern because populations are stable.  A threatened species shows a decline in the population of 30% over ten years or three generations. 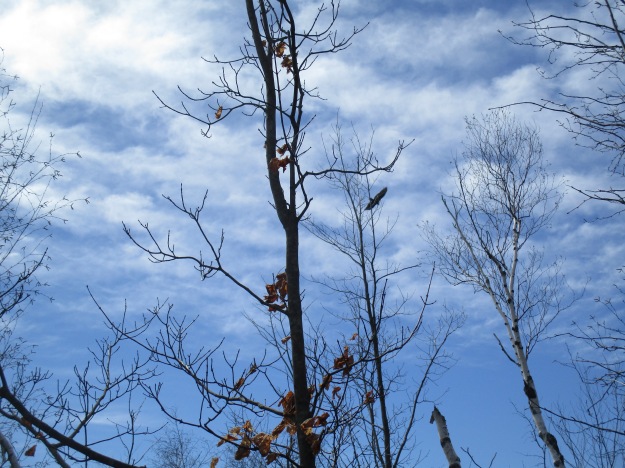 Examination of the logs used in the cabin shows that they were cut with a saw rather than hewn by hand.  The old-growth red pine logs used for the cabin were cut from the front lawn and trimmed at McClure’s sawmill.  Using a process known as dendrochronology the growth rings on a tree can be studied to determine the years in which they grew, allowing for a reliable date when the tree was cut.  When the cabin was expanded by the McKay family in 1877 they built on the end rather than adding a second floor or extending behind the original as was common.  The addition can be identified by a vertical line beside the cedar tree on the right.  The log cabin was three rooms like the home the Stongs built that stands at the heart of Black Creek Pioneer Village.  Nine people lived in the cabin where there were two bedrooms and a kitchen/living room.  This cabin is likely the oldest surviving cabin in Esquesing township.  It has been the centre of a controversy surrounding whether it should get a heritage designation or a wrecking ball.

The farm was briefly owned by John McDonald who sold it to Donald McKay in the 1870’s.  Donald and his wife, Jessie, had come from Glasgow, Scotland in 1869 and had landed in Toronto.  After operating a horse-drawn taxi for a short while McKay bought the farm and moved his family there.  The McKays operated the farm until 1943 when it was sold to the Vaughn family who had made their wealth in the Eaton Company.  They added it to their estate holdings where it stayed until the Credit Valley Conservation Authority bought it in 1973.  The name Fallbrook has been applied to the farm and a look at the steps Silver Creek takes as it flows past the house reveals why.

One of the defining features of the farmstead is the old stone arch bridge.  The bridge was originally built in the 1870’s from stones salvaged from the sawmill downstream. The 27th sideroad was opened in 1872 and this is likely the first bridge on this site.  When the local supply of wood was exhausted the focus shifted from cutting wood to grinding grain.  The bridge allowed customers from Balinafad and the surrounding area to bring their grain to the mill.  By 2008 the bridge was suffering from mortar deterioration and stone loss.  The road deck and railings didn’t meet current safety standards and the bridge, as well as the road, was intended to be closed.  A study found that four hundred people used the bridge daily and the surrounding roads didn’t need the additional traffic and so a plan was made to restore the bridge.  The restoration was completed in 2015. 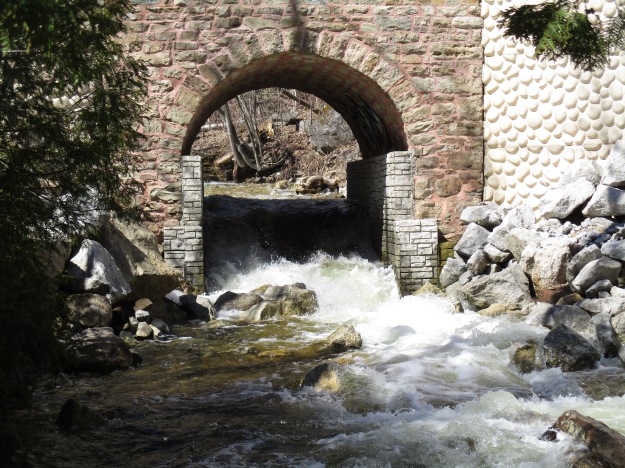 Downstream from the bridge, the creek continues to cascade over the rocks as it makes its descent.  The other side of the creek needs to be explored in a future visit because the remains of the sawmill and the grist mill are yet to be examined.  There is also the partial remains of an ice house waiting to be photographed.

Rows of stones running through the trees mark the outlines of former fields.  When the land was cleared the stones were moved into these rows so that they wouldn’t need to be dragged great distances to be disposed of.  This was an annual task until the fields were allowed to regenerate into forest.

As you enter and exit the trail from the 10th line you pass this little post with a camera in it.  Don’t worry, you won’t be videotaped.  It’s only a system to count the number of trail users so that funds can be used where the most people will benefit.

Silvercreek Conservation area is definitely on the list of places that need further exploration.  The many side trails, as well as the historical remains on the site, make it a must visit.