The world was changing rapidly every day with the ongoing spread of COVID-19. Almost everything was closed to the public except for parks and hiking trails.  We decided to take the hike along the Humber River from Pine Point Park north to an old estate named Rivermede.  Along the way we noticed a few extra people but there wasn’t an unusually large number of park users and we were able to have the trail pretty much to ourselves.

The trail follows the Humber River which it eventually crosses on a pedestrian bridge.  After crossing under Albion Road we saw plenty of deer and coyote tracks but the animals were in hiding.  Presently we came to the plot of land in old Emery Village which we had been seeking.  From the trail we could see the old lane way that once led to the river as well as the pump house and the main cottage on the hill top.

Percy Gardiner made his fortune manufacturing brass and later as a principal in the Toronto Stock Exchange.  In 1927 he bought 57 ares of land where he built a summer cottage for himself and his wife Gertrude.  They named their lavish cottage Rivermede and hosted parties for Toronto’s elite.  The house included tennis courts and a $75,000 swimming pool.  One of the first structures you see on the property is the old pump house for the swimming pool.  Even a simple building like this has been created with great attention to detail. 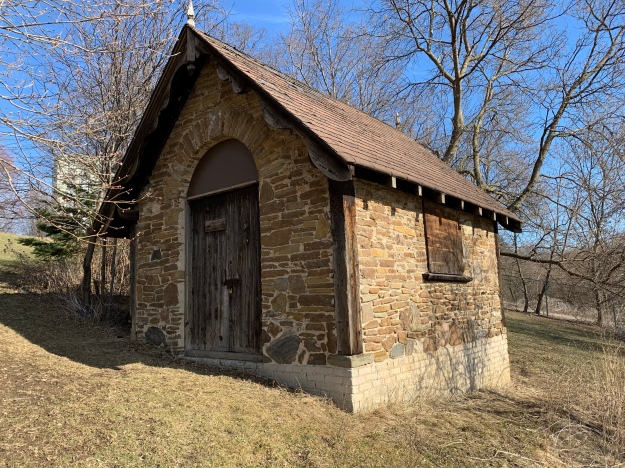 From the side of the hill you can look down into the former swimming pool area.  The pool was filled in but the rectangular outline can still be seen and the pool area has the only grass in the prayer garden.

in 1961 the Basillian Fathers bought the property and turned it into the Marian Shrine Of Gratitude.  They converted the property into a monastery and the swimming pool into a prayer garden.  Originally there were several Fathers who lived in the house and maintained the property.  They took turns praying over the faithful who visited the prayer gardens.  Today the house is kept by a single Father who has been practicing social distancing since long before it became mandatory.

The cottage had a barn attached to the side which looks like a second cottage.

A stone arch separates the barn from the house and after passing through it you come to a set of stairs which leads down to the prayer gardens.  Crang’s Pond can be seen in the background.  In the 1950’s a large gravel quarry was operated on the property which supplied gravel for construction of the local section of the 401 when it was under construction.  The pit eventually filled with water to create the pond.

The lower walls of the prayer garden feature a series of carvings that depict the stations of the cross.  Most years at Easter the gardens are full of people but this year they will likely be silent for the first time in decades.

The prayer garden with all of its religious symbols has taken on an air of spirituality that I could feel as I walked slowly around the grounds.

When the swimming pool was in use bathers would have two sets of ladders to enter the water with.  One on the deep and a second set of steps on the shallow end.  Today, the hand rails for the steps stand in memory of swimmers soaking up the sun at a summer cottage party.

The trail along the river provides opportunities to see the local wildlife.  We were lucky enough to spot an American Mink swimming in the river.  All the mink that we see in the rivers around the GTA are related to a group that was released from captivity by animal rights activists.  Several of whom have been convicted of terrorism.

As we close this blog we have no idea when the trails will be open to allow new blogs to be photographed.  We have several places that were photographed in the last few months that were not published.  Perhaps there may be a few new blogs with original content yet.  In an era where things change by the day, we’ll see what comes next when we get there.