American Mink can be found along the shorelines of lakes, rivers and creeks throughout the GTA.  They generally live alone except for mating season which begins in February.  The kits are born from mid-April to June in litters that average 4.  The American Mink has a short delay between insemination and implantation which means that the female can delay the start of gestation for up to 45 days while she waits for favourable weather conditions.  With a mild winter and early spring it will tend to lead to earlier births than would be the case in years where there had been a severe and late winter.  The picture below shows a mink swimming with a kit in its mouth.

Mink don’t hibernate and so they can be seen all winter and their tracks tend to reveal where their nests are.  One lives in my area, I won’t say exactly where because of the babies, and so I went to see if I could get a picture of it since I am now laid off on Fridays.  I was lucky enough to see it return from a foraging trip and swim back to the nest.  Then it emerged a few minutes later with something in its mouth and swam across the creek.  When it climbed up on a rock in mid-stream I got a picture which showed that it was carrying a baby. 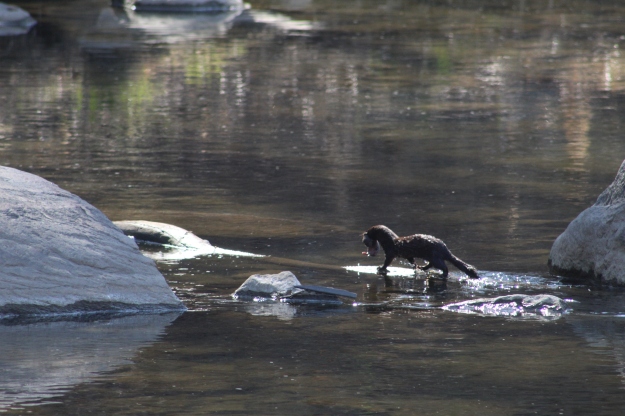 It took the kit across the creek and into a different den among the rocks on the other side.  Mink are known to keep several dens, each with multiple exits for security.

Mink babies are born blind with just a fine layer of soft grey fur.  When the kits are about 25 days old they will open their eyes for the first time. This allows them to start to learn the skills of hunting for food so that mom can wean them at about 35 days.  These little ones still have their eyes closed.

Over the next few minutes she brought four kits to the new den.  After the third one she paused to collect a few more leaves for padding before going after the fourth.  She stopped and took one final photo op before disappearing into her nest to suckle the young ones and warm them up after their dip in the cold water.

American Mink can often be found along the shore of Lake Ontario where they build their home in among the rip rap that is used for erosion control.  This picture was taken in Colonel Samuel Smith Park in Etobicoke. 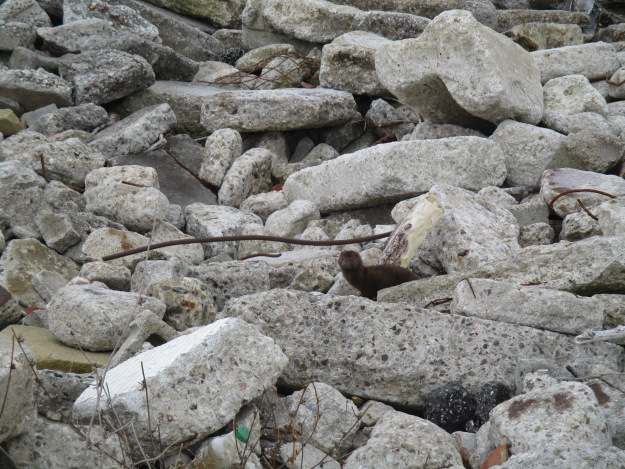 This one was photographed in the winter during our exploration of the Ghost Town of Mount Charles.

Seeing a mother mink moving her recently born kits is one of those opportunities that you only get if you happen to be in the right place, at just the right time.  We’re glad we captured this in pictures.

Google Maps link: Do not disturb!