Maple Nature Reserve is 35 hectares of the Oak Ridges Moraine near Dufferin Street and Teston Road.  Much of the property was used as a Ministry of Natural Resources office complex including and old quonset hut that had been decommissioned and has since been removed.  Access can be had from four locations but I had decided to look at it on my lunch on Friday and so I parked at the lot beside the old ministry building on Dufferin Street.  I went for a brief walk and got my first ever picture of a Yellow-billed Cuckoo which assured that I would return on Saturday to see what other surprises the reserve held.

Yellow-billed Cuckoo are distinctive in their call and are hard to spot because they will stand still and even hunch down to try and hide heir white bellies.  They are helpful to the forest because they are one of the few birds that can eat hairy caterpillars.  They can eat as many as 100 tent caterpillars in a single meal.  You might also find them feasting in an area where there are a lot of cicadas.

The ministry building is currently vacant with all the services, including City of Vaughan Archives, having moved to city hall.  It is just one of the buildings on the site that is awaiting decision of its future.  The trail down the hill from here leads to a larger parking lot and some washroom facilities.

For Saturday’s adventure I decided to park in the circle that can be found in the first driveway east of Dufferin Street on Teston Road.  This leads to the Arboretum Trail which loops around most of the northern section of the nature reserve.   The trails are wide but climb up and down the moraine and although sections like the Arboretum Side Trail claim to have steep sections they are quite manageable. 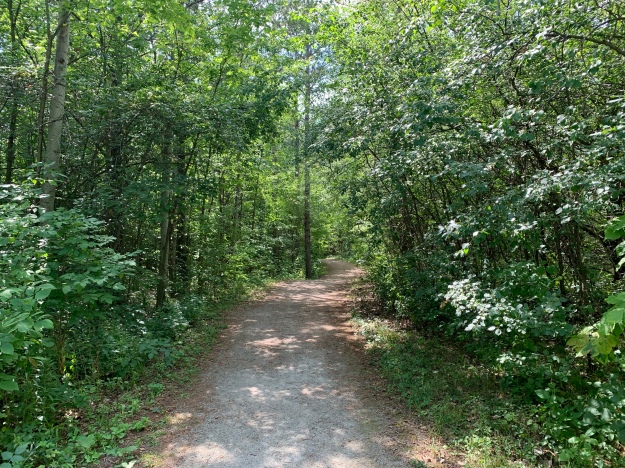 At one point along the trail there is a cluster of Veitch’s Blue Globe Thistles.  These produce a flower head the size of a golf ball  and a few of them were starting to open.  Globe Thistles have lovely flowers considering the less desirable prickly leaves on them and have been imported for use as garden flowers.  This escape is attracting a hover fly that is coming in to look for pollen.

Where the East Don flows through the park there are a couple of old buildings sitting near a small pond.  These have been shuttered most likely awaiting demolition as the area is slowly re-naturalized.

It was a nice day for the Painted Turtle to crawl up on a log in the pond and start basking.  Water is a poor conductor of heat and so turtles will crawl up onto a log and soak up heat from both the log and the sunshine.  This allows them to regulate their body temperature to between 32 and 35 degrees celsius.  Basking also allows a turtle to absorb UVB which is needed for the absorption of calcium and it allows them to dry out causing leeches and parasites to fall off. 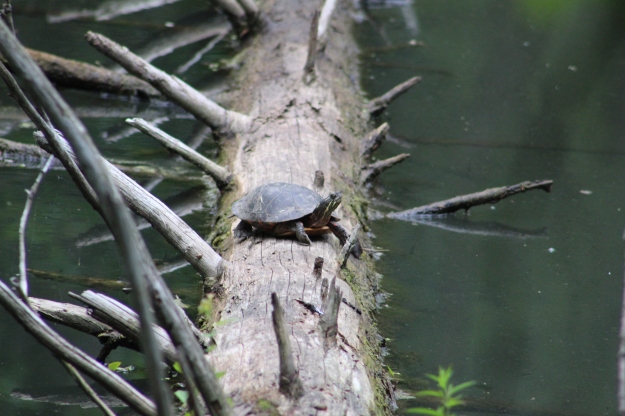 South of the parking lot is the area that once held a quonset hut and parking lot used by the ministry.  Both have been removed and the area has been contoured to allow for pools to form when there is a lot of rain.  Known as Ephemeral Ponds the shallow spots also fill up with water in the spring when the snow melts.  They provide small habitats that are suitable for amphibians that come to eat the insects that abound when the ponds are full.  If you come at the right time you have a chance to see Spotted Salamanders in the ponds at Maple Nature Reserve.  The trails in this section of the park cross the Don River on a new foot bridge and boardwalk. 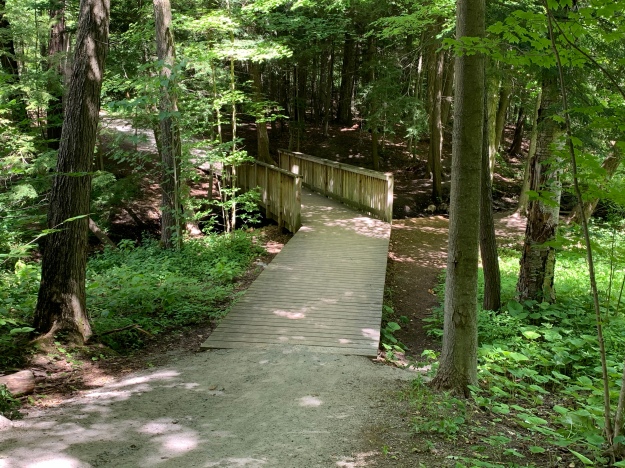 Scarlet Waxy Cap have a slimy cap with waxy gills and white spores.  They are sometimes referred to as Scarlet Fading Waxy Caps because the colour will fade to yellow as the mushroom ages.  They are considered edible but as always we leave the plants to do their natural cycle in the hopes that others will enjoy seeing them or subsequent generations.

With just over 3 kilometres of trails this is an area that can be completed in a single trip providing you do a couple of sections twice.

On your way to Maple Nature Reserve you may well pass the last church drive shed in Vaughan Township at the Cober Dunkard Church.