Jacob Engle was one of the founders of the Dunkard sect of Mennonites in Pennsylvania and in 1808 was organizing settlers in York County.  Meetings were held in homes for the first 80 years even though a large Meeting House was built at Heise Hill in 1877.  Gormley was about 10 miles away and people in the area west of Yonge Street continued to meet in homes for the next 11 years.  Sixteen families hosted the church including that of Peter Cober (green on the map below) and several different Baker, Boyer, Doner and Heise homes.  Mennonties and other Anabaptist denominations were known for their belief that anyone baptized as a child needed to be re-baptized as an adult.  The Dunkards were named because of their belief in “dunking” people through immersion.

In 1839 Peter Cober donated a small parcel of land on his property at Lot 12, Concession 2 in Vaughan Township for a cemetery.  Today it is known as the Baker-Cober Cemetery because the land was donated by the brothers-in-law Peter Cober and Michael Baker. Although it contains the remains of some of the first settlers in the area the cemetery is still active with the most recent burial being in 2010.  One of the truly unusual aspects of this cemetery is the pioneer styling of some of the recent burials.  They seek to keep the simplicity of the earliest buries including the tradition of reporting how long a person lived.  Today we tend to record birth and death dates.

In 1888 the congregation decided that it was time to build a permanent place of worship.  By this time the property had passed into the hands of George Cober.  He donated land south of the cemetery for the construction of a church.  Nicholas Cober constructed the building of white pine with no adornment. 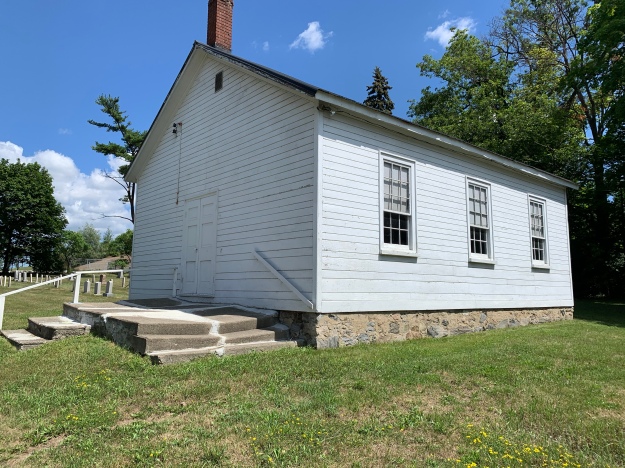 The floor remains the way it was built without even the adornment of a coat of paint.  The benches and the stove provided a minimum of comfort and in the winter the congregants would sometimes sit closer to the stove.  On October 21, 1888 the first service was held in the new church but records from George Cober indicate that house meetings continued into 1896.

Peter Cober attained the position of Bishop in the church and conducted services in homes for many years.  It was Bishop Cober who introduced services in English in 1860.  Even as the German services were being replaced, the custom continued until 1916 of closing the service with a hymn sung in German.

The pioneers had to travel across roads that were often muddy or snow packed by horse and carriage.  A drive shed was added to give a place to shelter the animals during the service.  The Cober Dunkard church shed is the only surviving church shed in Vaughan Township.

They don’t park horse and buggy here as much anymore and so the space is in use for washrooms which are not provided in the little structure.  The cubicle that can be seen at this end of the shed is the ladies washroom while the outhouse for the men is at the other end.

George Cober was likely born at home on this piece of property in 1826, as was the custom at that time.  He continued to farm the property when his father passed on and in 1916 he passed on.  His burial service was conducted in the church that he donated the land for and then he was buried in the graveyard that bears his name.  I imagine that George saw relatively little of the world outside his community.

In 1935 services were switched from every two weeks to just monthly and now the church can be used by appointment only.

2 thoughts on “The Cober Dunkard Church”