The Nashville Conservation Reserve is made up of over 900 hectares of land that was bought up by the Conservation Authority in the 1960’s and 1970’s.  In the aftermath of Hurricane Hazel there were plans to create several large flood control reservoirs.  The lands in this conservation reserve would have been developed into a large pond created by damming the Humber River.  Funding wasn’t made available and the property was left to passive recreational uses.

On a previous visit to the Conservation Reserve we had followed the old road allowance for Kirby Road and had not ventured too far into the actual park.  We returned to do a further exploration, once again parking at Kirby Road and Huntington Road. 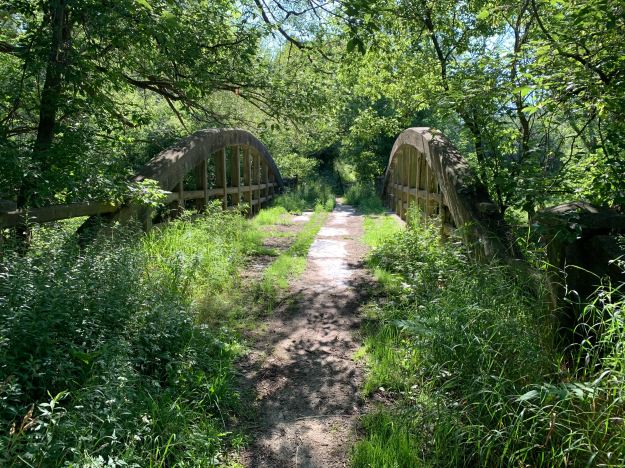 Structurally the bridge is in bad shape.  The steel reinforcement is exposed everywhere and large chunks of concrete have already fallen away.  The TRCA Management Plan for Nashville Conservation Reserve included a clean-up of the bridge in 2015 that removed a lot of the deteriorating concrete.  A similar bridge over the Humber River on Old Major Mackenzie Drive serves a single house on the one side of the bridge.  The City of Vaughan is legally responsible to maintain the bridge for the family that lives there.  It is estimated that it will cost about $800,000 dollars to repair that structure. 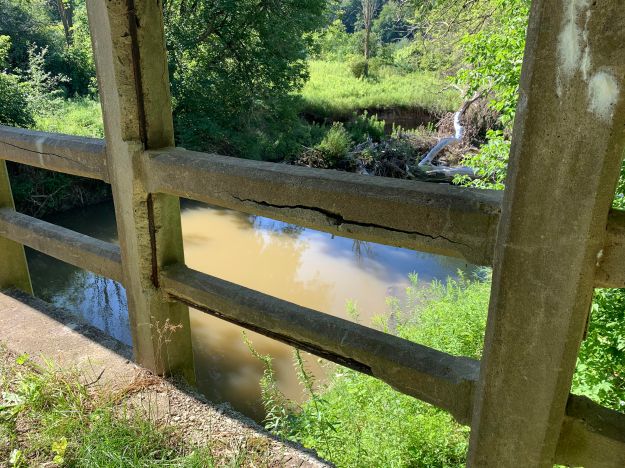 As we saw on our previous visit to the reserve the bridge no longer serves anything but pedestrian traffic on the Humber Valley Heritage Trail.  Kirby Road through this section was abandoned in the 1970’s and the bridge closed to vehicular traffic.  With the cost of repairs likely to be similar to the Old Major Mackenzie bridge it looks like the days of this bridge are numbered.  The official plan is to permanently close the trail on both sides of the bridge sometime in the next few years.  The view from below the bridge supports the idea that it should be removed before it collapses into the river and creates a flooding obstacle.

With the spread of dog-strangling vines and the subsequent decline in common milkweed it was feared that monarch butterfly populations could suffer decline.  It appears from personal observation that this year has been good to the butterfly population and there are plenty of examples to be seen every time we go out hiking.

Just past the bridge and near the top of the hill we made a left turn to enter the northern loop trail through the woods.  Trails are marked with blue slashes and were all but deserted as we made our way along.

Northern Tooth fungus is typically found on Maple Trees where it grows in densely packed shelves from wounds in the tree.  Over time it kills the heart of the tree leaving it hollow and susceptible to being blown over in strong wind storms.  One of the trees along the trail has several large patches growing out of it but it appears that it is the only tree in the area to be suffering from this fungus.  Undoubtedly this tree has already been destroyed, it just hasn’t fallen over yet.

The carrots we enjoy at dinner time are cultivars of wild carrots, also known as Queen Anne’s Lace.  A cultivar is a plant that has been selected because it has a desirable trait that it will continue to pass along.  The trait that has been cultivated from the wild carrot is our domesticated carrot.  The flowers on Queen Anne’s Lace are white and clustered in dense umbels.  Among all the white flowers was a single plant which had all four or five umbels that were pink coloured.

Artist Bracket or Artist Conk is a bracket fungus that grows on trees where it decays the heart of the tree.  When they are young they are white but quickly turn darker as they age.  When the spore bearing surface below is scratched it forms dark lines that become permanent when the conk dries. Artists use these to create permanent pictures.

There were several small mushrooms growing in a cluster at the base of a rotting log.  Orange Mycena produces an orange pigment known as leinafulvene.  It has been shown to have antibiotic properties as well as being toxic to certain tumor cells. 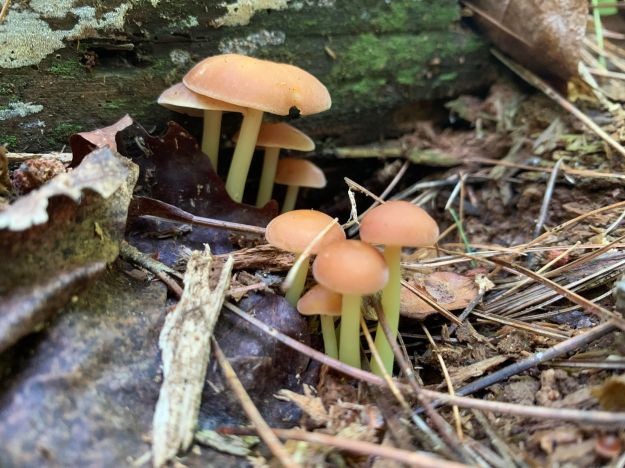 Nashville Conservation Reserve is still largely unexplored and we’ll have to come back sometime to see what is happening with the old bridge.