One of the first settlers in York (Toronto) was John Scadding.  He worked as secretary to Upper Canada’s first Lieutenant Governor, John Graves Simcoe.  In 1794 he built a log cabin on his estate as a first home.  In 1856 the city purchased the Scadding homestead for use as a park and to give the city a place to build a new jail.  Thankfully, the early settlers of Toronto preserved some history for us and his home was moved to the CNE in 1879 to make way for the park.  I parked on Carlton Street near Riverdale Farm and went down the stairs into Riverdale Park West.  On my return trip I walked through Riverdale Farm which is also a great place to visit.

Originally, Riverdale Park was 120 acres but it was later expanded to 162 acres.  When the Don Valley Parkway was built it split the park in two and reduced the size to the current 104 acres.  The two halves of the park are joined by a pedestrian bridge that gives access to the Lower Don Trail which leads north toward The Bloor Viaduct.  The eastern part of the park is smaller and retains the distinct shape of the old riverbed as can be seen in the picture below. 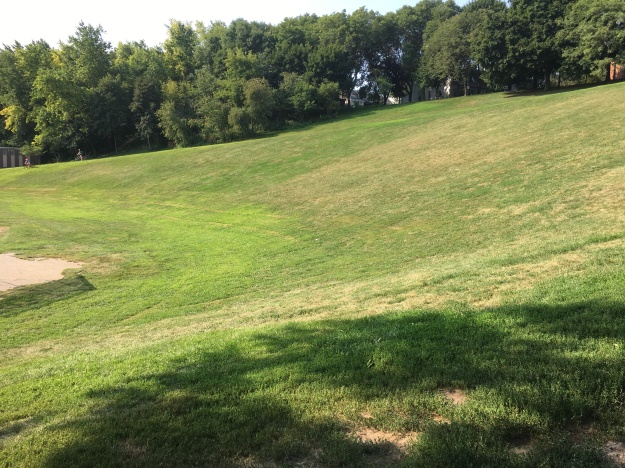 In the 1880’s the lower portion of The Don River, the Don Narrows, was straightened out and a couple of sections were cut off from the river.  These sections of the former river now form the ponds in Riverdale Farm.

The east half of Riverale Park was used as a landfill in the 1920’s and exhaust pipes still line the sides of the park where methane gas is allowed to escape from below.  Along with a sports track there is a swimming pool on the east side of the park.  The north end has been naturalized again and there are many mature trees along the various hiking trails.

The Task Force To Bring Back The Don has been working on various projects in the park including several tree planting sessions.  The first one on the eastern slopes was actually the first action in the 40 Steps to a New Don River program.  They have also created a small wetland at the base of the ravine where the runoff from the embankment is collected and bulrushes now grow.  Maximilian Sunflowers are growing in a large cluster at an intersection of trails in the woodlot.  They are not native plants and this cluster was likely planted here.  They are often found in the wild as escaped garden plants.

At the north end of the park a set of accessible ramps leads to a bridge that allows you to cross one of the on-ramps for the DVP.  This bridge makes a great place to get a look at the top end of the park.

Purple Loosestrife was once considered to be a real threat as an invasive species with fears that it would choke out native wetland plants.  There appears to be a balance now where the plant co-exists with native plants and it may eventually be considered naturalized.  Monarch butterflies were taking advantage of the flowers and the sunshine.

In 1881 five cannons were brought to Riverdale Park for decorations.  The one that stands near the old jail was cast in 1806 and bears the insignia of King George III who ruled from 1760 until 1820 making him the third longest serving monarch in British history.

Riverdale Park was once the garden for the Don Jail.  Prisoners were used to tend the gardens as well as look after the buildings and animals at Riverale Zoo.  The Don Jail was built in 1864 as the third jail in the city.  It was considered to be a modern facility at the time with better accommodations than other jails of the era.  It wasn’t too long before overcrowding led to it becoming a dreadful place to spend any time.  There was an addition built in the 1950’s and the original jail was closed in 1977.  The addition has since been closed and demolished.  The remaining jail building is one of the oldest pre-confederation buildings in the city.

The front entrance to the jail was very ornate with Father Time looking down on all the inmates as they entered the building that would be their new home for the duration of their sentence.  The cover photo shows the front of the building with all of the artwork that decorates it.  The Latin phrase meaning Abandon Hope All Who Enter used to adorn the lintle above the door.  With the old jail now serving as part of a rehab hospital it was considered inappropriate and has been removed.  The inside of the old jail has been renovated but it used to be similar to the Owen Sound Jail we featured earlier this year.  Seventy people were executed at the jail, the last two in 1962.  Unclaimed bodies were buried on the property under what would become a parking lot.  Recent demolition and construction on the site revealed several skeletons. 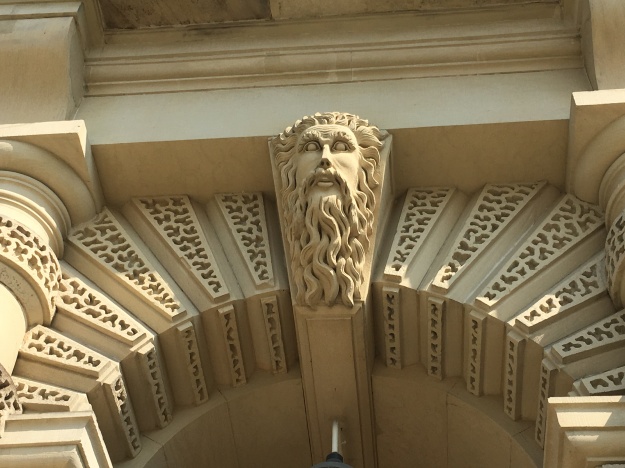 Starting in the 1860’s the south corner of Riverdale Park was used for healthcare facilities, originally known as the House of Refuge.  A small pox epidemic in 1875 saw the facility changed into the Riverdale Isolation Hospital.  Patients with contagious diseases were treated here until the late 1950’s.  By 1957 the threat of contagion was greatly reduced and the facility was given a new mandate.  They began taking care of chronic illnesses and rehabilitation.  In 1959 a new building was designed for the Riverdale Hospital.  Mushroom shaped canopies were designed for the entrance to the new facility.  With the construction of the new 10-story Bridgepoint building the mushroom canopies have been preserved as part of the architectural heritage of the site.

The new healthcare facility also has become a place of public artwork.  The Max Tanenbaum Sculpture Garden contains twenty life-sized sculptures made of metal strips.  They celebrate life through a display of dance and sport themes.

Riverdale Park has a long history and has seen many changes over the years but remains an interesting place to explore.