It was the first day of summer and although the sky was threatening rain it wasn’t actually supposed to happen.  I decided to check out the remains of the partially constructed Newmarket Canal.  I parked in the conservation parking lot off of Green Lane near the second concession.  The East Holland River crosses here and heads north out of
Newmarket.  I walked about 15 minutes south of Green Lane to where the third lock on the abandoned canal was built to start my investigation of the canal.

The idea of building a canal to link Lake Ontario and Lake Simcoe had it’s beginnings in the 1820’s.  Following the War of 1812 greater consideration was given to the moving of goods and people and a period of canal building began.  The first Welland canal opened in 1829, the Rideau in 1832 and Trent-Severn in 1833.  An idea was brought forward to link Lake Ontario near Toronto with Lake Simcoe and then Georgian Bay.  The project never got past the drawing board however and was abandoned until Rowland Burr resurrected it in the 1850’s.  In 1857 he had some success and the government commissioned the Lake Ontario and Georgian Bay Canal.  The idea was to use the Humber and Holland Rivers to reach Cook’s Bay on Lake Simcoe. With all the dredging and locks that would have been required the cost became too great and the idea was put on the shelf.

William Mulock was born in 1844 and was a member of parliament from 1882 until 1905. Serving as the MP for Newmarket, Mulock revived the idea in response to his constituent’s requests to do something about rising railway prices.  Mulock envisioned the canal extending only as far as Newmarket with a possible future extension to Aurora.  In 1904 Mulock proposed the canal which began construction in 1906.  The first section from Lake Simcoe to Holland Landing would require no locks but there would be three locks between there and Newmarket. The third lock was intended to lift boats 11 feet but as can be seen below has been filled in and is now part of Bayview Park.

The dam has also been partially filled in as the first three sections are near ground level behind the dam. A sluice gate allows the river to bypass the old lock.

Black Raspberries grow along the sides of the trail between lock number three and Green Lane. It looks like there will be a nice crop coming soon for those who live in the area.

Four swing bridges were constructed of which only the one near Green Lane remains.  This one was built on the Kelley Farm and was locally known as the Kelley Bridge.  The blue swing mechanism can be seen under the new pedestrian bridge in the picture below.  The bridge would have swung across to rest on the concrete support to make way for a ship to pass through the canal.

The gears that ran the swing bridge remain in place although the bridge was never used in that manner.  It was used as a stationary steel truss bridge to carry Green Lane over the Holland River until 2002 when it was replaced with the newly widened road and bridge.  The earlier truss bridge was removed in 2004 for safety reasons and the swing bridge works painted to help preserve them.

The paved path works its way up the west side but I chose the less used dirt path on the east. The trail leads to a hydro corridor and then through a marsh.  I kept following a set of human footprints that led me across two small streams and through a field onto an abandoned piece of roadway.  From there I could see the second lock.  Great Blue Heron seem to like the river and local marshes.  I saw at least three different ones as I made my way along the river.

A red car hood has been tossed off of the bridge on the second concession and into the East Holland River.  A tree is taking advantage and growing inside the car part.

Lock number two was the tallest of the three rising 26 feet.   An old concrete bridge still spans the river on the second line but it was added after the canal was abandoned and a swing bridge was no longer required.  This is now an abandoned bridge across an older abandoned canal lock.  Rogers Reservoir was intended to contain some of the water required to operate the canal and the canal walls extend well beyond the actual lock here to form the sides of the reservoir.

The trail continues into Holland Landing where lock number one stands abandoned.  It’s lift was 16 feet and is the only one of the three locks that the river still runs through.  Holland Landing has it’s own collection of historic buildings including an 1870 court house and two churches from the 1840’s.  It’s interesting to ponder what might have become of the village if it had been home to one of the locks on a functioning canal system.

The project ran way over budget and construction was about 2/3 complete in 1911 when the Federal Government changed after 15 years of Wilfrid Laurier’s Liberals to Robert Borden’s Conservatives.  Construction was stopped while the new government reviewed the project, ultimately determining that there simply wasn’t enough water to make it work.  Calculations showed it would take over 2 weeks to fill the locks and so the project was abandoned.  No further work was done until 1924 when a crew was sent around to make the locks safe.  The picture below of the first lock shows the mounting position for the swing bridge for Old Yonge Street which has since been removed. 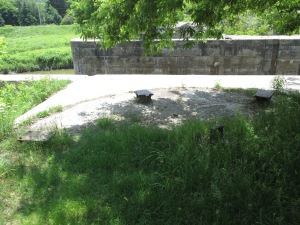 Although his proposal for a canal to Newmarket ended in disaster, earning the nickname “Mulock’s Madness”, he managed to have a very successful career after leaving politics.  He worked in the justice system serving as Chief Justice of The Supreme Court of Ontario from 1923 until 1936.  He passed away in his 100th year having earned his own nickname, “The Grand Old Man of Canada”, and a street name in Newmarket.

A story published in Newmarket Today on Feb. 9, 2019 contains considerable detail much of it setting the record straight on some fake facts that can be found on the internet.  Included among them is the idea that there was insufficient water to operate the canal.  Richard MacLeod is an expert on Newmarket history (The History Hound) and his article can be found here.