Summer holidays in September give one the opportunity to visit places that are just outside of the range of a normal weekend.  Elora is one of those places and so off we went.  The town of Elora was founded as Irvine Settlement in 1832 but changed the name to Elora when the first post office was established in 1839.  Like Saint Mary’s, Elora is a town of stone buildings, much of the materials were extracted from the Elora Quarry.  The Quarry is now a swimming area managed by the Elora Gorge Park and one fee allows access to both parks.  Unfortunately, at this time of year the swimming area is closed and the quarry property is marked as No Trespassing.

After being unable to visit the quarry we parked in the large town lot behind Ross Street.  The local foundry business was established in 1848 and rented out to several entrepreneurs who repaired anything mechanical or made of metal for the community.  The operation is most famously known as The Potter & Matheison Foundry.  Later, nuts and bolts as well as saws and other implements were made here.  This building is a fine example of restoration and we look forward to seeing what is done with the building next door.

The building that is locally known as The Kiddie Kar Factory was built in 1873 following a fire at the site.  At the time it was known as The Elora Foundry and Agricultural Works.  In 1916 John Mundell purchased the rights to the Kiddie Kar which was a wooden tricycle.  He bought the old Potter foundry to use as a production factory.  The plan for redevelopment of the south side of the river calls for the development of condominiums and a hotel.  The old Kiddie Kar Factory is scheduled to be restored and included in the lobby of the condominium.

Captain William Gilkinson, who founded the town, made plans for a sawmill as soon as he had purchased his property.  Three years later it was destroyed by a fire but it was rebuilt in 1839.  In 1854 the structure was rebuilt in stone but was destroyed by fire and rebuilt in 1859, 1866 and 1870.  The mill operated under many owners for the next 100 years but by 1974 it was ready to be converted into a 5-star hotel.  This was closed in 2010 but a new hotel development in 2018 has brought life back into the building.  It is one of the few remaining 5-story mills in Ontario. 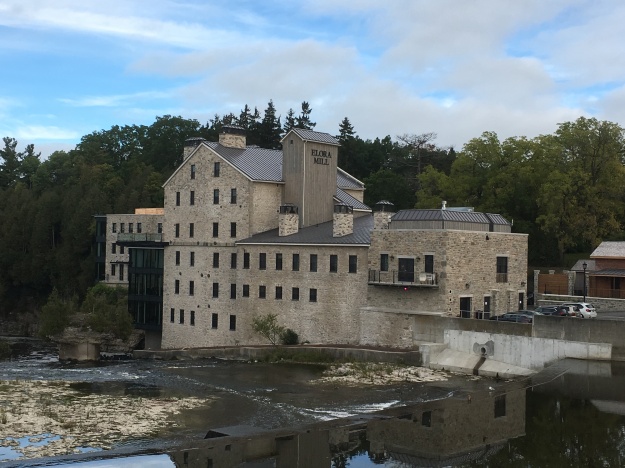 All that remains of The Elora Furniture Company is the shell of the building they developed in 1910.  The site dates back to the 1850’s and had several uses and several fires as well including those of 1886 and 1896.  By the 1920’s the factory was turning out bedsteads and wooden furniture frames with a staff of over 40 people.  Much of their production was shipped unfinished to upholstery shops who completed them to the specification of the customers.

A trail leads from behind the old industrial section of Elora and into the Elora Gorge Park from the back entrance.  Three kilometres of trails wind through the park offering spectacular views of the gorge.  Limestone cliffs rise 22-metres from the river to the table lands above. 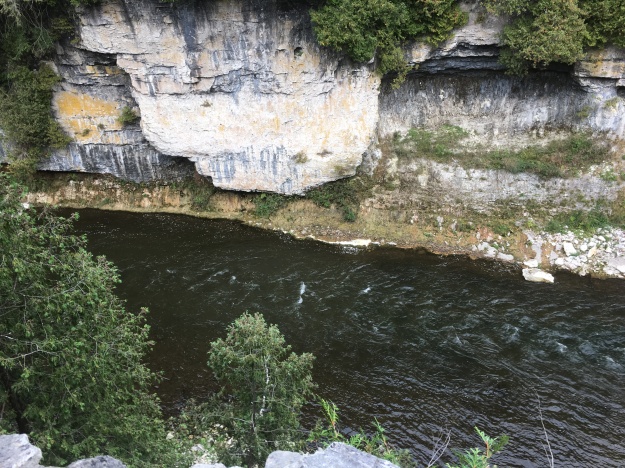 A stairway allows you to pass through a karst cave where you can reach a platform halfway down the side of the cliff face.  This cave is known as the hole in the wall.  A second cave is seen on the left in the picture below but it can’t be accessed safely.  From here you have to climb the stairs back to the top of the ravine to continue downstream. 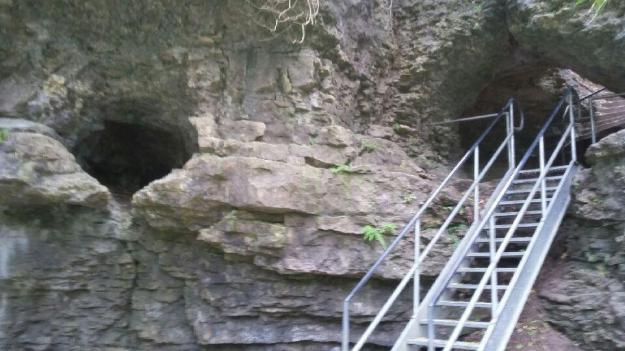 There were several species of mushrooms that we hadn’t seen so far this season. Birch Polypores are quite distinctive among these shelf fungi.  The tree below shows them in several stages of development, from a small bud to a fully formed mushroom.  The underside has a lip around the outer edge.  This polypore has had several uses over the years including being used as a razor strope, an anesthetic and to keep fires burning.

Following the trail leads to a bridge where you can cross the river at the height of the gorge.  There is also a low level bridge which was closed leading to a temporary closure of most of the campsites on the north side of the river.  This bridge gives a nice view up and down the river which will be interesting as the fall colours come on.

The park promotes tubbing down the Grand River through the ravine.  There is a 2 kilometre course with specified entry and exit points.  The stairs that access the river at the entry point have a crank at the top to hoist the stairs for the winter.  This keeps the winter ice from demolishing them.

There is room to follow the shore upstream a short distance when the water isn’t too high.  This provides some nice views of the gorge from the lower perspective.  People use the trails and stairs to access the river for fishing purposes.  The area is known for brown trout but smallmouth bass, carp, northern pike and walleye are also caught.

We followed the north side of the river until we found ourselves back in town.  Elora has much of their early heritage preserved in the many stone buildings that remain in town.  One building of interest is the drill shed which was built in 1865.  During the 1860’s the United States was fighting their civil war and British North America started to fear for their defense and so the strength of local militias was increased.  This led to the construction of drill sheds in which to train the volunteers.  Most of these have been destroyed but this rare one still survives and today serves as a liquor store with an unusually beautiful interior.

Just upstream from this building is a foot bridge and another dam.  A nice old stone raceway leads from the pond behind the dam.

Elora is a remarkably well preserved community that still displays much of the early architecture due to the fact that it was built of stone and didn’t fall prey to fire.

While in the area, why not visit the Shand Dam?