A hog’s back is a narrow ridge of steeply inclined rock strata that is resistant to erosion. In Oakville, the Sixteen Mile Creek forms a hog’s back at St. Mary’s Pioneer Cemetery. The Google Earth picture below shows how the hog’s back is surrounded on three sides by water (blue).  Following a story last year on the east side of Sixteen Mile Creek we received a tip about an artifact on the other side.  The entrance to a tunnel that used to run under the hog’s back aparently still remained on the west side of the creek across from St. Mary’s Cemetery. Initially, it was used to carry a wooden flume which supplied water to power the first mills in Oakville.  There is limited parking in the area and in some places, you risk towing.  We found limited free street parking on Kerr Street south of the 403. Access to the bottom of the ravine can be gained off of Kerr Street adjacent to the highway bridge. 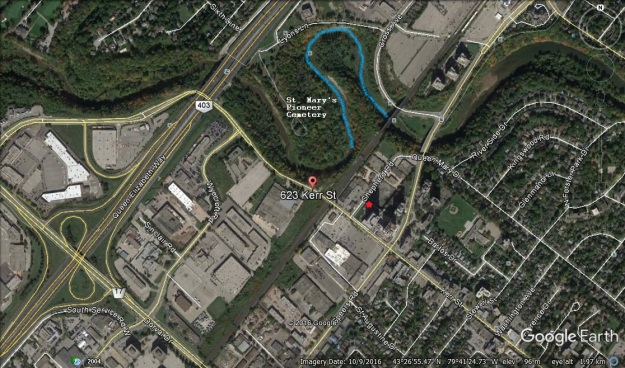 The bridge replaces an earlier crossing at river level.  Today’s Kerr Street used to have a switchback that led down to the ravine floor and this was eliminated when the high-level bridge was installed in the 1930’s.  There is still an obvious roadway that has been cut down the side of the ravine although it is becoming overgrown with hawthorn and other first generation growth.  There were signs that going down this way wasn’t a good idea, due to trees that had fallen across the roadway and so we returned and descended beside the bridge.

Two types of bridge construction can be seen from the ravine floor.  In the foreground are the graceful arches of the earlier bridge of the Middle Road Highway.  When it opened in 1937 between Toronto and Burlington it was the first inter-city divided highway in North America.  The lamp posts featured “ER” in wrought iron for Elizabeth Regina or Queen Elizabeth, giving the highway the longest stretch of illumination in the world at the time. The second bridge, on straight pillars in the background, was opened in 2011 when the addition of HOV lanes required that a second structure was built to cross the creek. Notice how the new construction was built with room for another expansion in the future. 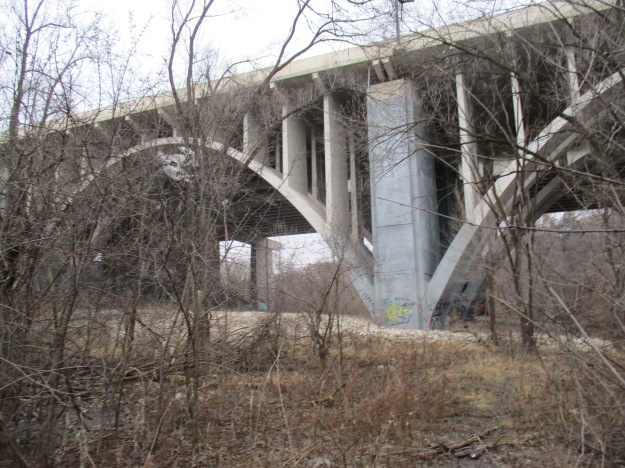 The west creek bank has an open floodplain until you reach the major curve in the river near the railway tracks.  At this point, the creek edges up against the ravine wall.  Before the curve extensive work has been done on the embankment with shale.  We found the opening with its crude arch that can be seen in the photo below.  The embankment is shored up with additional shale to support the entrance to a tunnel which has recently been filled in.  The bottom of a wheelbarrow remains in the opening to attest to the deed and give an indication of scale. 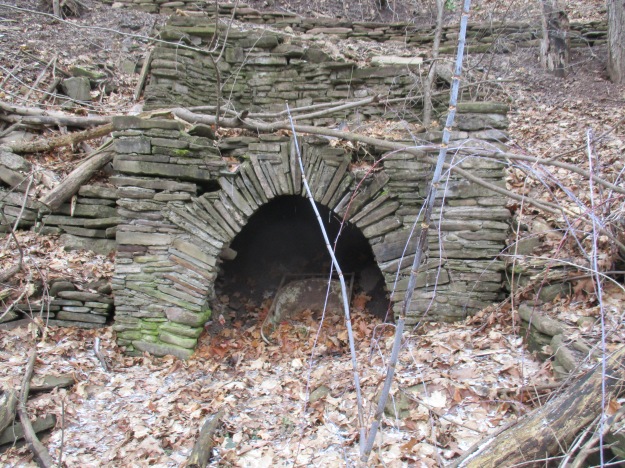 On the top of the ravine above this inlet are the remains of some extensive stonework. Arches and columns support other arches and these, in turn, support the deck of a more modern house.  Following the creek ceases to be an option at this point and you are forced to retreat or climb the side of the ravine. 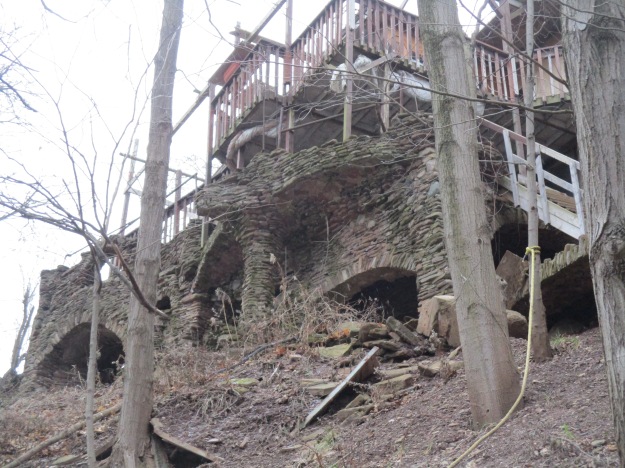 Stonehooking was performed between about 1830 and World War 1.  Shale was collected from the lake bottom and used in construction projects.  Two examples of this kind of construction formerly stood on Kerr Street just south of the railway tracks.  They have since been moved onto Shepherd Road to make space for the highrise building that can be seen in the corner of the picture below.  The two houses were built in 1911 and 1930 respectively.  Three triangular dormers grace the two-story 1911 home which has been restored with new cedar shingles.  The story-and-a-half 1930 home can be seen on the left in this photo.  Their location has been marked with a red asterisk on the Google Earth picture above where they sit in the shadow of the building that they were moved to accommodate. 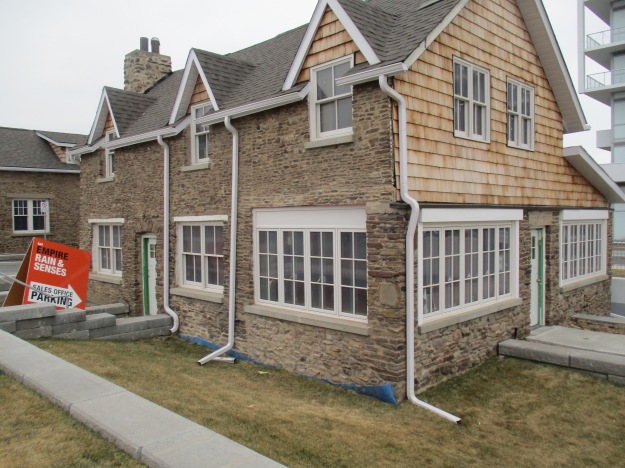 At the end of Shepherd Road is a small park that has a sign welcoming you to West River Community.  Here, contrary to trespass laws, an obvious trail leads across a triple-tracked and very active railway line.  This trail leads out onto the top of the hog’s back.  In an effort to fully explore this section of the creek we had to descend back to creek level. 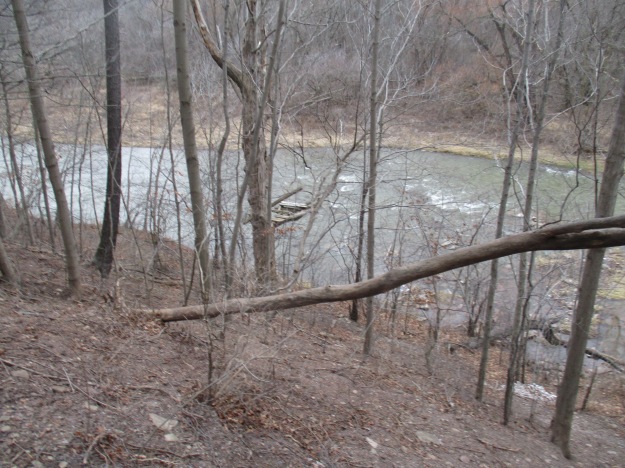 Backtracking upstream, it was confirmed that there is just a short section along the base of the railway line that cannot be traversed safely at water level.  The view south from here reveals the layers of shale that make up the hog’s back.  Extensive talus slopes at water level contain the loose clay, sand and shale that has fallen from the cliff face.  A thin strip of vegetation along the edge of the water gives a faint hope of being able to get past. 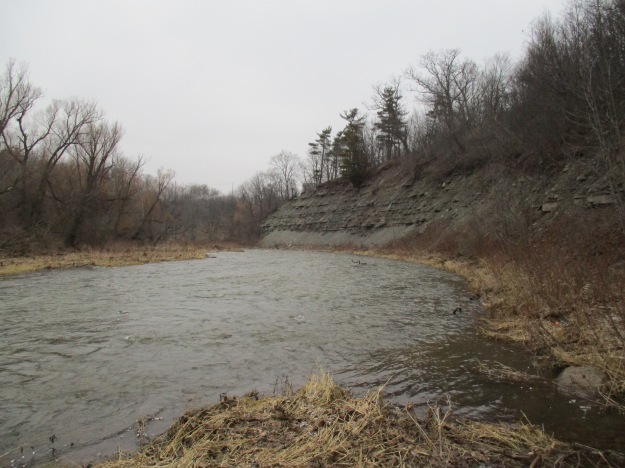 It turns out that there were sufficient places to step to allow us to slowly work past all the talus. Rapidly changing water levels could make this quite dangerous at times. 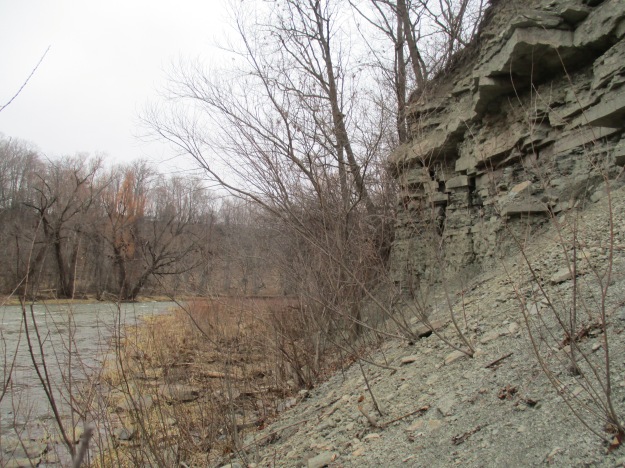 At the end of the hog’s back we found a camp site.  We are either very early or much too late for breakfast. 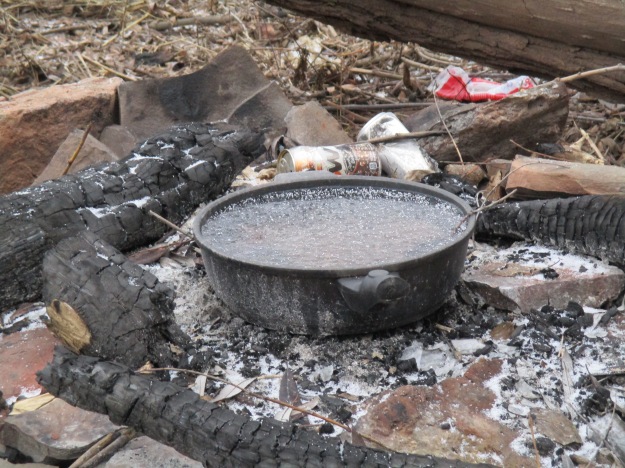 Once around the tip of the hog’s back, we saw two GO trains pass each other in opposite directions on the rail bridge over Sixteen Mile Creek.  The 1877 county atlas shows the rail line (yellow below) passing through Oakville as the H & T Branch of the Great Western Railway (GWR).  In 1834 the GWR was the first railway in Canada West (Ontario) to receive a charter, as the London and Gore Railway.  It was rechartered in 1845 as the GWR.  When it opened in 1853 it connected Niagara Falls with Windsor.  In 1855 the line was extended with the Hamilton & Toronto (H&T) branch.  The rail bridge over Sixteen Mile Creek was built of cut blocks of limestone.  When it was triple-tracked the new section was made of poured concrete with a pattern that mimics the cut stone blocks beside it. 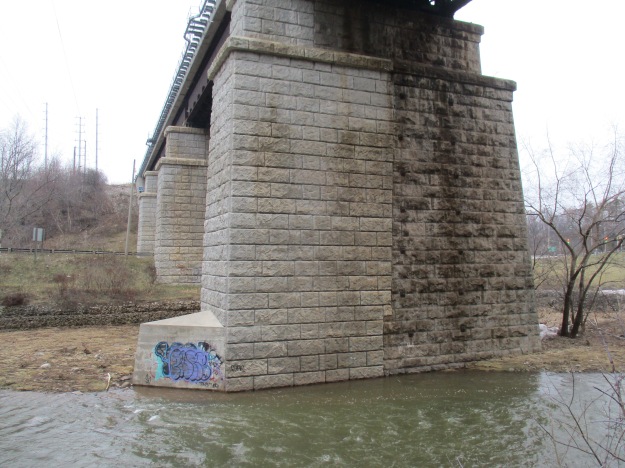 The historical atlas below shows the journey starting at the parking spot which is marked with a star.  The trail is marked in red and the end is marked with a diamond.  Having hiked all the way around the hog’s back at creek level we are forced to conclude that the shale structure featured in the cover photo is the only candidate to be the remains of the mill flume intake tunnel. 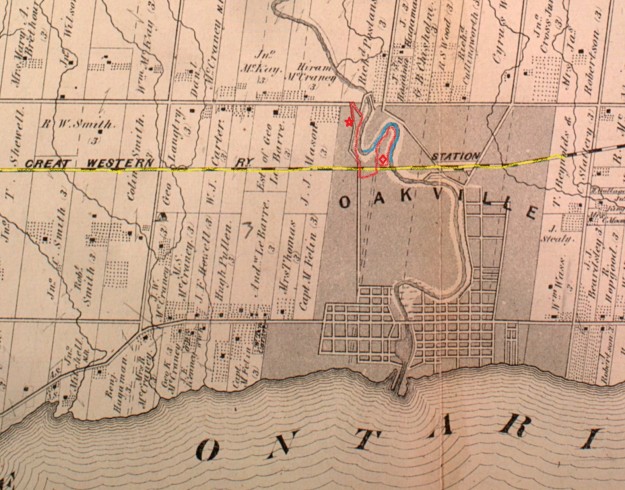