Laskay is not a ghost town in the formal sense because people still live there.  It was founded in 1832 when a dam was erected on the East Humber River to create a mill pond for a sawmill.  Joseph Baldwin took over the mill site that year when he bought the 100-acre property.  In 1849 he added a grist mill and later expanded with a woollen mill.  When he arrived the community had the nickname Bulltown but Baldwin changed the name to Laskay after his hometown of Laskay in England. 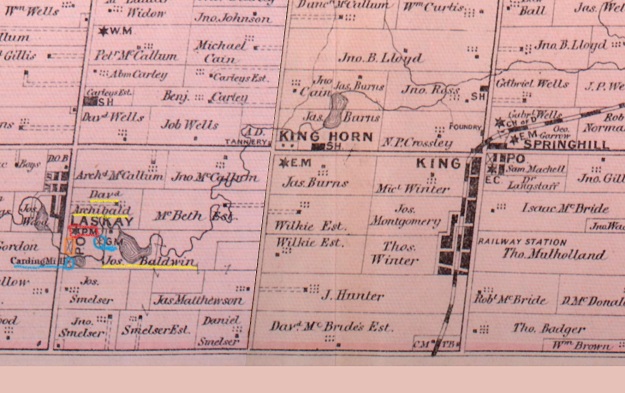 The Humber River was prone to flooding and the mill dam was often washed out.  The buildings themselves were destroyed in the floods of the late 1870’s.  By the time of the map above the sawmill was already gone.  The Grist Mill and Carding Mill are marked in blue.  Fires took out the rest of the mills and by the end of the century, they were all gone. 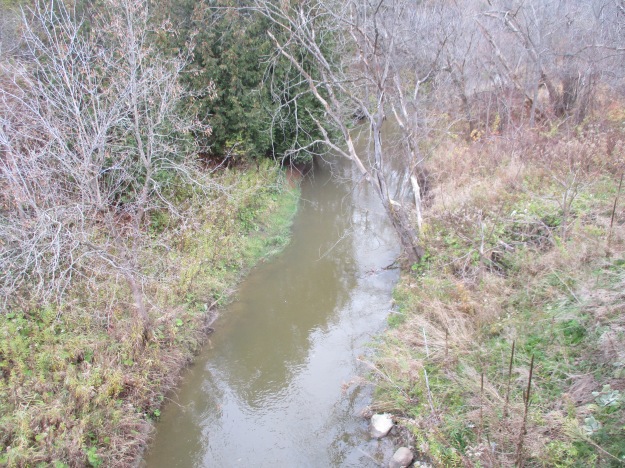 Village lots were laid out on either side of the river on Joseph Baldwin and David Archibald’s lands.  From the 1850’s these lots began to fill up with workers from the mills along the river.  The town soon had a blacksmith whose shop once stood on Old Forge Road.  Travellers along 3rd line west (Weston Road) would seek a place to water their horses and wash the dust from their throats and beginning in 1845 they made Laskay Tavern a regular stop.  The tavern was built by Baldwin who constructed a general store and post office next door.  Adjacent to that, he built a dressmaking store for his wife to run, a business she shared with her sister.  The tavern is in use as a private home today. 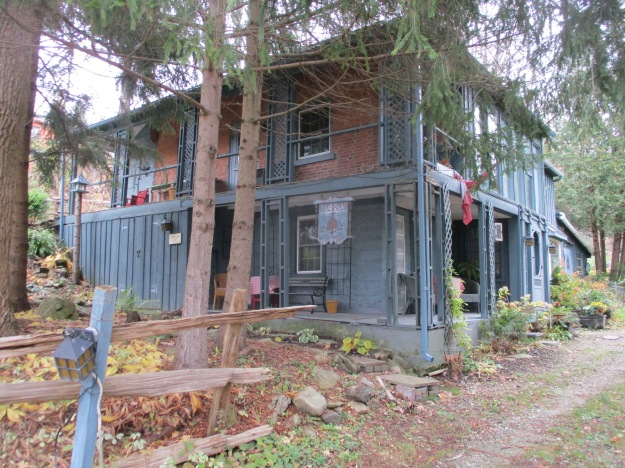 The town doctor lived in this house on the main street.  The side and rear of the house were planted with herb gardens used in various healing ointments and potions. 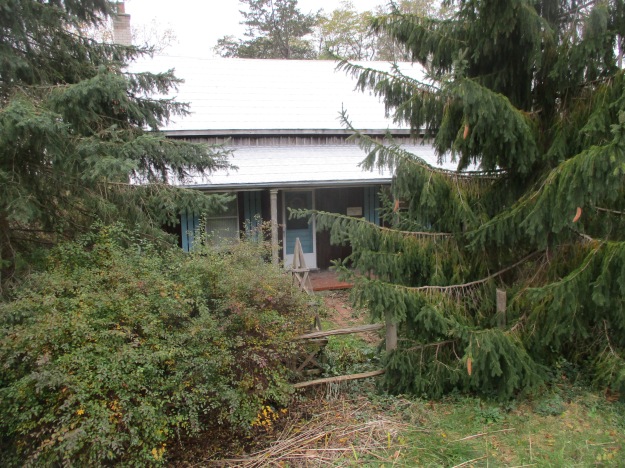 The county atlas shows a Primitive Methodist church in the town in 1877, marked with red on the map.  The church itself was absorbed into the United Church of Canada and the building was eventually closed as a church.  Today it is marked by Old Church Road on which this interesting house can be found.  The walls contain double sets of buttresses with concrete caps as was common on churches around the turn of the past century.  It appears that the old wood structure was either replaced or given a new brick cladding around 1908.  Today most of the church structure is gone and a house stands amid the old walls. 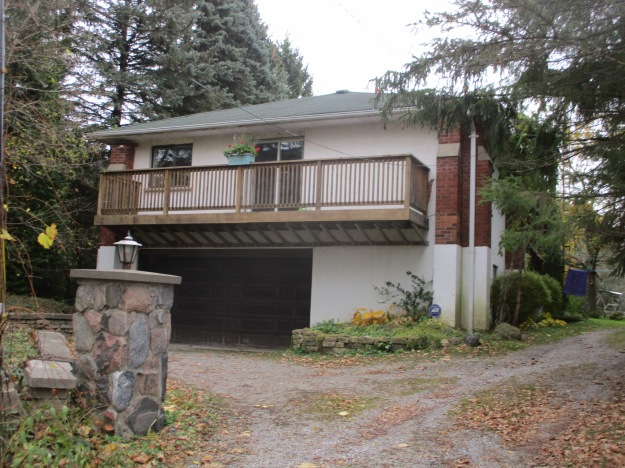 The Laskay Emporium is shown below and in the cover photo.  It was one of the main hubs of the community starting in 1856 when it was built.  It served the town as a general store and post office for nearly a century.  The store had a “Boom Town” front that hid the sloping roof from the street.  The veranda has a unique sloping roofline under which the locals would sit to watch the evening fade and smoke their pipes.  The Emporium closed and sat vacant waiting for demolition until February 19, 1960, when it was rescued and moved to Black Creek Pioneer Village where it is preserved. 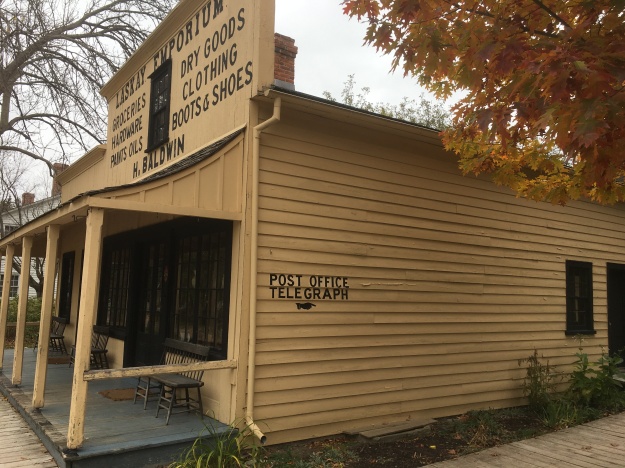 Joseph Baldwin’s son Henry was the postmaster for 20 years and part of his job was to sort the daily mail into the various slots on the post office pigeonholes.  The Post Office is designated with PO and marked in orange on the map. 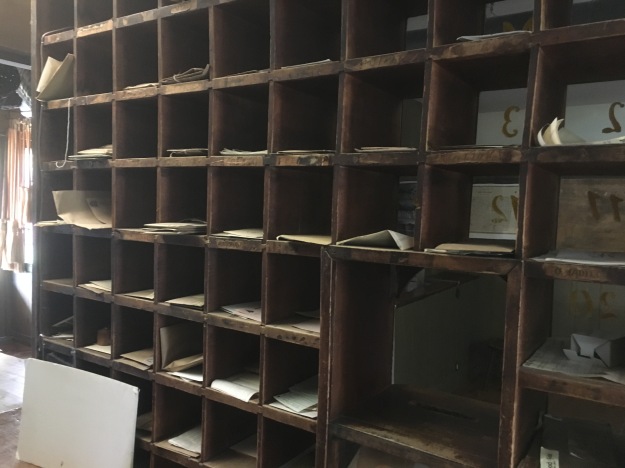 The emporium was the Walmart of the era, importing things and reselling them.  All the usual household needs could be bought here. 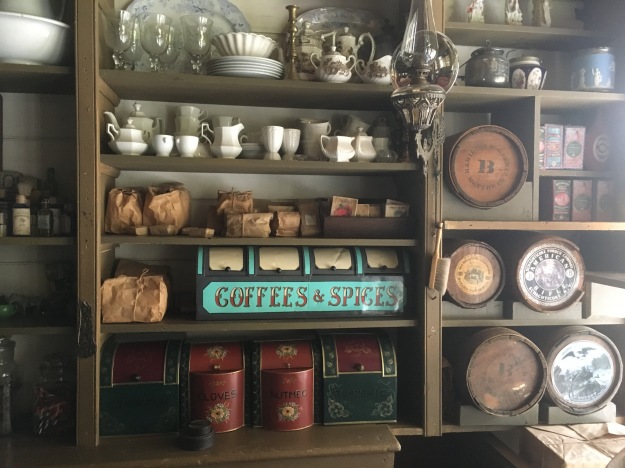 Customers could buy milk by the cup for 2 cents or a lemon for 3 cents.  Three cups of sugar sold for 20 cents and eggs were 2 cents each. You could get four cups of flour for 20 cents, a cup of butter for 18 cents and baking soda for 5 cents.  For under a dollar you could get the ingredients to make a cake.  The cod for your main meal would cost you 8 cents. 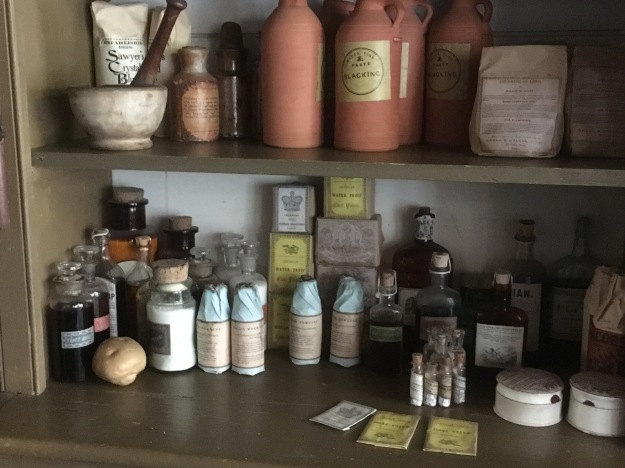 The Emporium was divided into three rooms on the ground floor with one serving in part as an office.  The post master’s desk and safe are seen in this picture. 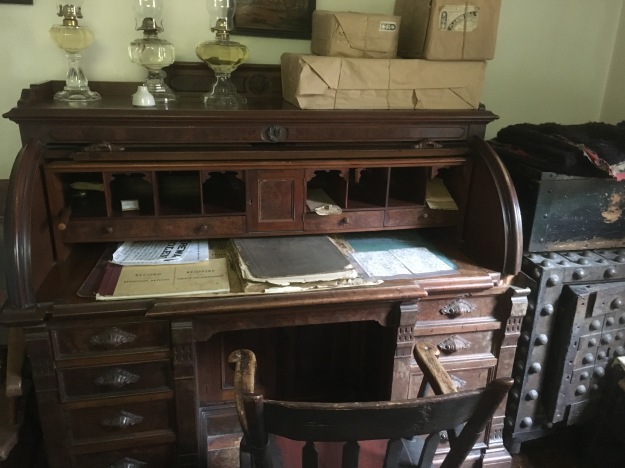 The third room was used to sell larger items and to unpack the crates of imported goods.  Beginning in 1852 the Ontario, Simcoe and Huron Railway began stopping at their new station in Springhill (King City) to deliver products from overseas as well as to allow local products, such as grain milled in Laskay, to be shipped to market. A selection of typical cookware is displayed in the rafters of the Emporium. 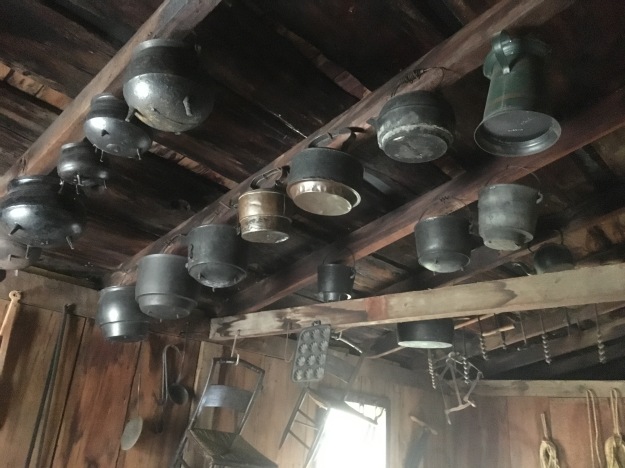 One other building from Laskay has been preserved and that is Laskay Hall which was moved from the town to King Township Museum in 2017.  It was built in 1859 by the Sons of Temperance.  Since this museum also houses the railway station mentioned above, the oldest surviving railway station in Canada, it will certainly be featured in a future post.