It was one of those perfect summer afternoons.  The skies were sunny and it was 21 degrees without humidity.  I decided to visit Bruce’s Mill Conservation Area to check out the remains of the 160 year old grist mill in the park.

Situated in the headwaters for the Rouge River, Whitchurch Township became the home of many German settlers.  In order to be able patent a land grant, and gain full rights of ownership, a settler had to meet certain requirements.  They had to build a home of at least sixteen by twenty feet and occupy or rent it within three years.  Five acres of land had to be cleared and surrounded by a fence.  The road allowance along the property had to be cleared and maintained, free of stumps.  After taking the oaths to the crown one would then own their land grant, usually 100 acres.  On the 1877 historical atlas map below the fifth concession is marked with “V” at the top of the page.  Stouffville Road runs across the top of the map (under the blue line). Thomas Lewis owned lot 35 and below that on lot 34 is a pond on property belonging to Robert Bruce.  It is marked with a GM for Grist Mill and a water wheel symbol.  This is the location of Bruce’s Mill.

Casper Sherk built the first grist mill on this site in 1829 and he may have been the settler who first owned the land grant.  On the map above a road has been built below the mill running between modern Warden and Kennedy Roads.  This road is not part of the normal grid of the land survey and is therefore a “given road” built to allow customers access to the mill.  Sherk built an earthern berm and a wooden dam to create the mill pond.  The berm remains but the dam has been replaced sometime after 1900 with the modern concrete one with it’s dual sluice gates.  In the picture below the grasses hide the berm which is equal in height to the concrete structure.

In 1842 William and Robert Bruce bought the mill and some adjoining property and changed the name of the mill to Carrick Mills in honour of their home in Scotland.  The sluice gates at the mill are still remarkably complete.  Wooden slats remain in both sluice openings and extra’s are carefully stacked on top.  Three hoists are standing on top as if waiting to lower the boards back in and stop the flow of water.  In the past the mill pond was used for swimming and fishing but it is currently filling up with wetland plants, creating a bird and butterfly watcher’s paradise. 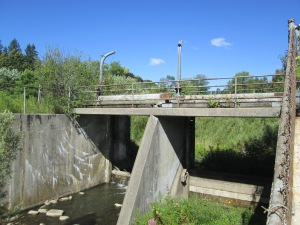 The present mill, as seen below and in the cover photo, was built in 1858 using wood from the original mill in the storage area at the north end of the building.  There are wooden boards on the ground under the front awning to cover a hole where grain was off loaded into the mill.  A similar system was used at the Marchmont Grist Mill. 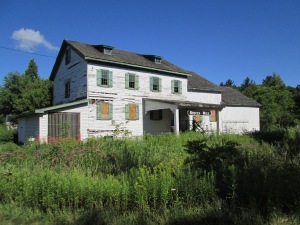 The Bruce’s built a two and a half story mill of wood construction on a stone foundation.  Glass was expensive and larger pieces were easily broken so smaller panes were typically used.  This mill has two sets of 3 over 3 windows in each opening.  The wire mesh on the right hand side in the picture below protects the water wheel and the tail race from intruders.  The mill is in a state of disrepair as boards drop off of the sides and windows are broken.  A hole in the roof is letting water into the building.

Initially water was brought from the mill pond to power the water wheel by means of a wooden flume.  Later this was replaced with a penstock or round metal pipe.  The concrete structure in the picture below supported the penstock as it came out of the mill pond.

Bruce’s mill has a twelve foot diameter steel water wheel.  Most water wheels were made of wood and were perhaps 40 inches rather than the nine foot wide Fitz Undershot Waterwheel installed at the mill.  Samuel Fitz began building waterwheels in Hanover Pennsylvania in 1840. In 1852 they began construction of steel waterwheels which became the mainstay of their business. Steel wheels last much longer than wooden ones and can be used in the winter when ice clings to the porous wood making a wooden wheel inoperable. 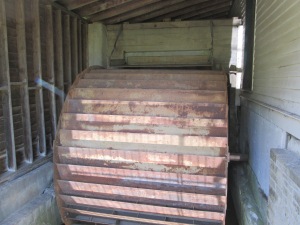 In their online marketing materials the Fitz Waterwheel Co. presents a picture of the waterwheel at Bruce’s Mills.  The external building that now houses the waterwheel had not been added at that time.  Also, notice the penstock running along the ground where it is bringing water from the mill pond to the wheel.  The pressure from the penstock turns the wheel from the bottom, making it a rare undershot wheel. 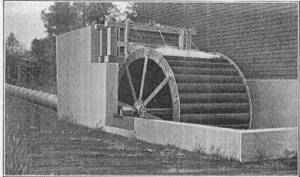 The Toronto Region Conservation Authority bought the property in 1961 and the mill was closed in 1962.  Bruce’s Mill was one of the last operating mills in Ontario to close.  The TRCA has operated the site as Bruce’s Mill Conservation Area since 1965.  Walking garlic, also known as crow garlic or stag garlic, is not native to North America.  Farmers consider it to be a noxious weed because cows that graze on it can have a garlic odour to their beef and dairy products.  It has a sharp aftertaste not present with cultivated garlic. 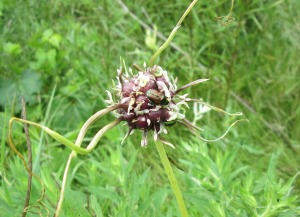 Treetop Trekking is a new sport that is increasing in popularity.  In 2002 the first park in Canada was established in Rawdon Quebec.  With four parks in Quebec the company expanded into Ontario where it now has four additional parks.  The park in Bruce’s Mills Conservation Area opened in 2013 and contains a 700 foot zip line.  In the picture below a person in blue can be seen near the centre of the picture zipping above the butterfly gardens on the aptly named Monarch Zipline. 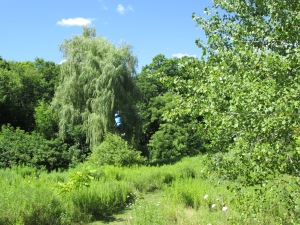 A look at the rear of Bruce’s mill as it slowly falls apart.  It would be a grand place to restore and use for weddings and other functions.

Check out the most popular hikes in this special feature.