If you drive in the GTA chances are you already think you have the world’s biggest pothole in your neighbourhood.  In reality, you likely do.  Represented as the world’s largest intact glacial pothole, The Devil’s Well has been submitted for inclusion in The Guinness Book Of World Records.  Intrigued, we decided to visit and so we parked in the Lion’s Club parking lot on Main Street in Rockwood and entered the park on Valley Road (see note).  Valley Road crosses the Eramosa River on an old concrete bridge from where it used to lead past mill worker’s cottages to the site of the Harris Woolen Mill.

Another trail leads you into an old quarry.  Here, the Rockwood Quarry extracted 10 metres of amabel dolomite and operated a small lime plant.  The quarry was closed in the 1960’s and is being taken back by cedar trees.  The floor of the quarry has several surveillance pipes drilled into the bedrock.  The older ones have been filled in with rocks while newer ones are locked. 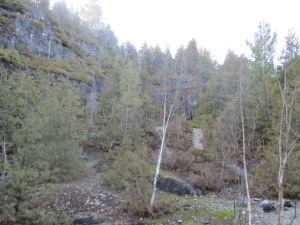 We followed well used trails as we made our way from the old quarry to the site of the giant pothole known as The Devil’s Well. It’s possible to walk full circle around the top of the pothole but there is no way to climb down into it due to it’s barrel shape.  The pothole is 13.1 metres deep and is 6.4 metres wide just below the rim at the top.  The bottom tapers down to 4.9 metres.  To get inside we would have to find another way down.

We descended to the level of Richardson Creek hoping to find a way into the ravine that contains The Devil’s Well.  We had noted a couple of steel anchors in the rock face along the top of the ridge.  From the bottom we were able to see that there are dozens of rock climbing aids left screwed into the 25 metre cliff.  The pothole has only been cut a little over half way through this rock wall and cannot be accessed from down here.

We spent a few moments exploring Richardson Creek while we were there.  It runs for less than a km from highway 7 to the Eramosa River but this is just enough to feature this picturesque little cascade waterfall.  Standing above the falls, to the left in this picture, are the remains of an old cut stone dam.

Just below the dam stand two walls of an old stone building, most likely a saw mill that once used the mill pond just upstream.  The 1877 County Atlas shows the mill pond on Richardson Creek but does not denote a mill.  Likely the mill was already abandoned by that time as frequently happened when local wood supplies were exhausted.

Much of the Niagara Escarpment is made of dolostone and limestone which contain high amounts of calcium and magnesium carbonates.  These can disolve in the mild acid content of most natural water.  The sinkholes, caves, springs and fissures created by this process are known as karst.  Karst topography is a common feature in our recent escarpment hikes.  Some geological studies of The Devil’s Well suggest that karst led to the forming of empty pockets within the rocks.  The rapid flow of melt water from the retreat of the Wisconsinan ice sheet created rivers along the margins and under the glacier.  Just as modern industrial processes use high pressure water and an abrasive additive to cut through steel and granite, the force of this water acting with small rocks carved out six obvious potholes along a fissure in this piece of the escarpment.  As five of these potholes enlarged they coalesced to create a short ravine with worn sides and smooth concave pockets to mark the remnants of the potholes.  The sixth pothole stands intact at the eastern end of this chain.  This intact pothole has come to be known as The Devil’s Well and is claimed to have the largest volume of any existing complete pothole in the world. We ended up using a nearby cedar tree for support as we climbed down into this ravine to get to the potholes.  This and other parts of the hike are not for novice hikers and should never to be attempted alone.  The view below is from standing in pothole number four, looking into number five with The Devil’s Well just beyond the rear wall and accessible through it.

The wall to the pothole has not collapsed like the preceding ones, leaving an intact pothole behind it. There is a small crack at the bottom where you can enter from pothole #5.  The cover photo shows the view looking up out of the inside of the Devil’s Well where the trees above give an idea of the perspective.  This view is from the inside of The Devil’s Well looking back at the entrance. 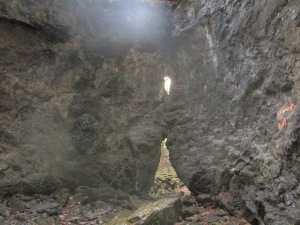 I did some very rough calculations to get an idea of the volume of this pothole.  This is only possible as an estimate due to the fact that it is wider in the middle than at the top and not exactly round either.  Most potholes are eroded in a slight barrel shape with the overhang quite noticeable from inside the Devil’s Well, as can be seen in the photo below.  If the city were to fill in the potholes in my neighbourhood they could fill hundreds with a single dump truck.  It seems that they should send a couple dozen trucks if they wanted to fill in this giant pothole. 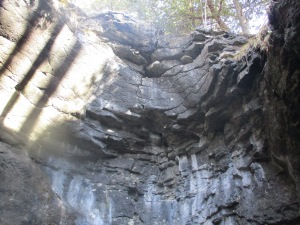 The surrounding property has been used for homes for mill workers at the Harris Woolen Mills as well as for a quarry operation following the time when it was an original land grant. Before the days of modern garbage collection people recycled most things.  Glass and metal that was deemed useless would be dumped on a corner of the property that wasn’t being used. This was often in a ravine or on the edge of a swamp.  Many partial antique medicine bottles and other broken glass jars can be found in several of these sites in the park. 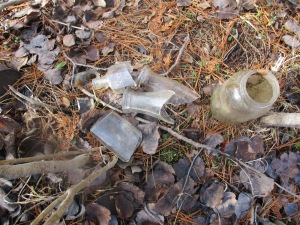 Richardson Creek empties into the Eromosa River which winds it’s way through the limestone bluffs in the Rockwood Conservation Area.

The quarry was closed in the 1960’s and the Old Quarry Road has been left carry a foot path.

The remains of a burned out building guard the site of the old quarry.

So the next time your tire drops in that pothole on your way to work, just remember, it really is just a very small one compared to the glacial pothole known as The Devil’s Well.

Note:  This area is posted as no trespassing.  Most land owners are happy to talk about the heritage on their property and I have rarely been denied the ability to take some pictures and preserve the local history.  The biggest concern is usually that people will follow who won’t ask permission and the property owner may choose to prosecute.  Please always govern yourself accordingly.