The Toronto Suburban Railway (TSR) ran between Guelph and Toronto providing commuter service until it was shut down and abandoned on August 15, 1931.  Since that time the line has been dismantled and much of the right of way has been re-purposed, some of it as a hiking trail.  We decided to visit a small section of the Guelph Radial Trail near Acton.  We parked on the edge of town near where Mill Road has been closed off at the bottom end of Fairy Lake.

Mass transit in Toronto got started in 1849 when cabinet maker Burt Williams designed and built 4 horse drawn stage coaches which he operated from St. Lawrence Market to The Red Lion Inn in Yorkville.  On Sept. 11, 1861 the Toronto Street Railway began with a similar route and made some expansions over a 30 year franchise it held with the city.  In 1891 a new 30 year franchise was granted to the Toronto Street Railway under William Mackenzie and James Ross who agreed to eliminate horse drawn buses as part of their deal with the city.  Over the next 30 years the city annexed large areas and was unable to force the Toronto Street Railway to service them under their contract.  When the contract expired in 1921 the city created the Toronto Transportation Commission (TTC) to operate mass transit.

The first trail to the left takes you to the Guelph Radial Trail but first passes through a wooded area where we noticed an odd patch of trees.  There are bent trees throughout the woods but we found one spot where they all appear to have been taken from a large oval and tucked into a knot the middle. 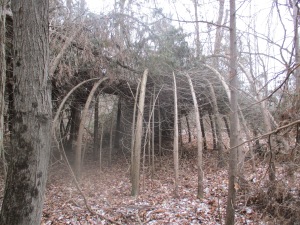 I had originally thought this looked like a circular cluster that had been produced by a spinning wind event but could find nothing on record.  A local resident confirmed that the ice storm of Dec. 22, 2013 had, in fact, caused the cedars to bend over to the ground where they stayed until the spring.  Some recovered but many didn’t leaving this reminder of just how powerful the weather can be.  This individual and his son, like countless others, helped clear the trails in the aftermath of the storm.  The long side of the oval is seen in the picture below. 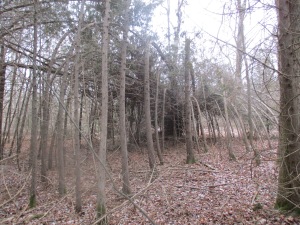 From the inside the bent trees it’s possible to see a few that have cracked but most of them appear to have been folded over without breaking.

Just below the horizontal branch on the largest tree in the picture below is a “toonie” which shows that trees up to 4″ in diameter have been bent over. 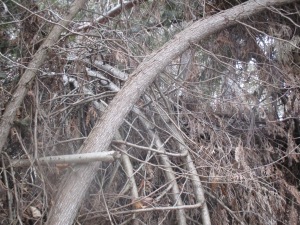 The 1877 county atlas shows Acton as having grown to the east of Fairy Lake along regional road 25 (2nd line) .  A grist mill stood at the outlet on the smaller of the two arms of the lake. Mill Street ran from the mill to Dublin Line (1st line).  We began our hike near the point where Mill Street touches the lower end of the lake. 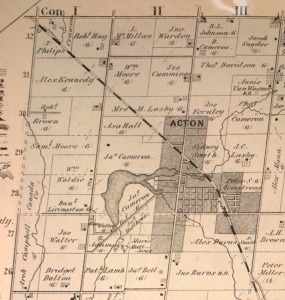 William Mackenzie, along with his partner Donald Mann, decided to expand their Toronto Street Railway service by adding radial lines to other communities.  In 1911 they surveyed the route for the Guelph Line which would run from Lambton yards for 49 miles to Guelph. Construction began in July 1912 and most of the track was installed in 1914.  The Great War slowed construction as did the building of a 711 foot bridge to cross the Humber  River.  One of the cars for the railway is seen crossing the Humber River trestle in the archive photo below. 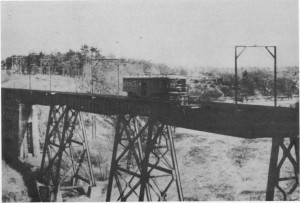 Mackenzie and Mann took steps to keep the costs down and this resulted in many curves to avoid purchasing expensive prime land for construction.  This caused the rail line to have to run slowly and this was partially responsible for it’s low ridership, especially in later years.  The line ran on private land, in some cases adjacent to highway 7, as it made it’s way toward Guelph. Personal automobiles led to the demise of the line and by 1929 it was operating at a loss.  In 1931 the daily ridership was down to just 300 passengers and service was suspended on Aug. 15.  The line was abandoned and the rails removed and re-used overseas during WW2. Today the Guelph Radial Trail covers part of the line from Limehouse into Guelph and has painted the trees with an orange blaze to mark the trail 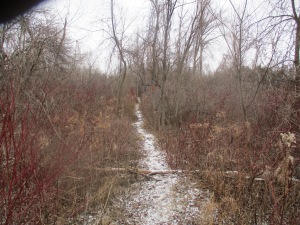 We visited remnants of the TSR in several places this summer and presented photographs in the following stories.  The crumbling remains of the bridge across Silverthorne’s grist mill tail race in Meadowvale and the rotting pilings in the mill pond at Eldorado Park are just two examples.  Today commuters sit on highway 7 and dream about a rail service on a private right of way that could run from Guelph to Toronto.  Perhaps the TSR was just 100 years ahead of its time.

The lot on the corner of today’s regional road 25 and 25 side road was owned by James Bell in 1877 when the atlas above was drawn.  He was born in 1841 to Samuel and Ann Bell who had built the stone barn and house on the property.  The remains of the barn are featured in the cover shot along with the unique silo.  This silo is unlike most that remain in rural Ontario which are made of poured concrete.  This one has been constructed of preformed concrete blocks that were made to look like cut stone.  The Bell’s would have obtained livestock feed at the mill in Acton until the farm became more prosperous.  Later a silo was added to store feed that was grown and milled on the farm.  The block construction of the silo dates it to around the turn of the last century.  The barn has collapsed in on itself and the old beams can be seen in the bottom. Hand made nails give an indication of the age of construction.  James and Agnes Bell were married on Oct. 26, 1877 and the stone house and barn were abandoned after a new brick house was built closer to the front of the property. 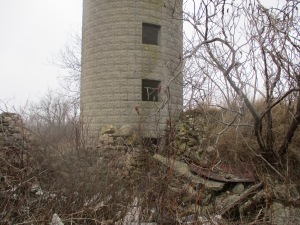 The old stone house stands near the barn and it too is slowly falling over.  The rear wall looks like it has about one more good wind storm left in it before it becomes a pile of rubble on the ground. When the Bells cleared the land they found an abundance of field stones which had to be removed to make the land suitable for farming.  These stones provided building materials for the barn and house as well as the fence lines to separate their fields. 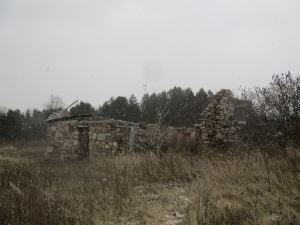 We arrived at regional road 25 and walked back through Acton to the car.  We noted an old steel pipe carrying water from Fairy Lake right past the mill and through the heart of town. There’s obviously lots more here for another time.