Happy Halloween from Hiking the GTA.

Alex Robertson Park covers 48 acres of the 134-acre Hydro Marsh in Pickering at the mouth of Duffins Creek.  This marsh is an important place because so much of the coastal wetlands along the Great Lakes has been lost due to urbanization.  The marsh is home to many kinds of waterfowl and the park has meadows including a Monarch Butterfly monitoring station.  The park has recently been turned into an outdoor art exhibit called Home Place which officially opened Sept. 22, 2001.  Dorsey James did most of the carving featured below.  Home Place and its enchanted artwork is formed of three parts: The Area of Enchantment, The Portal, and The Kijimba Kind.  The name Home Place was chosen in honour of the original name of Pickering.  The 1791 map below from the Pickering/Ajax Digital Archive shows Pickering Home District as it was originally laid out with lots running along the lake.

The Kijimba Kind is an area that contains wood carvings on old trees.  The first one you come to is Thor, the Norse god of thunder.  His mother is the earth itself and he is responsible for protecting mankind from chaos, destruction and the forces of evil. 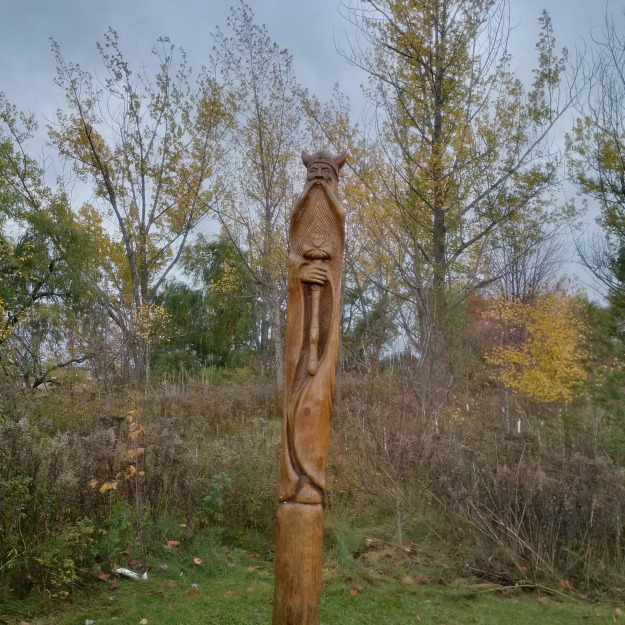 The Bridge Builder.  Tji-Wara had the power of metamorphosis.  When her people were being pursued she transformed into a tree so they could cross a river to safety.  When there was no food for the people she changed into an antelope so they could eat of her body. 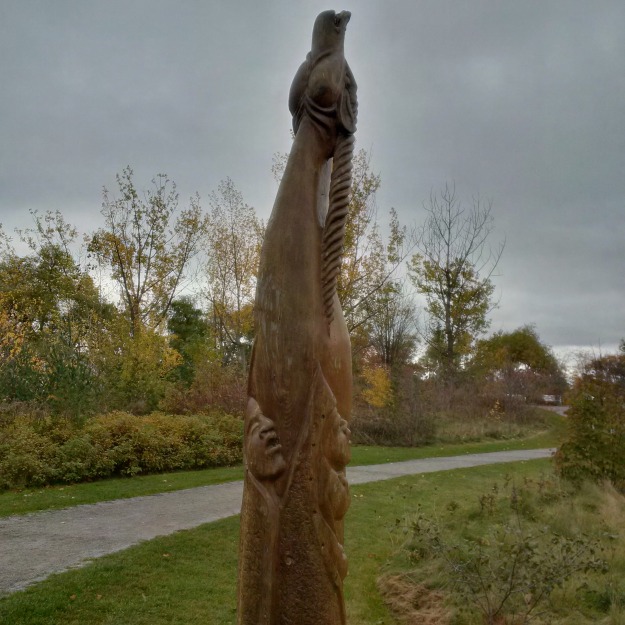 Aquilla, the eagle.  Most cultures see the eagle as representing power or determination. Some others see the eagle as bringing floods or periods of great loss.  The serpent in its talons represents evil to most cultures.  There are those, however, who see it as a symbol of reincarnation because it renews itself by shedding its skin.  The serpent lifted up on a pole is a symbol of the medical community and has likely been adapted from a story about Moses lifting a serpent on a pole to heal the people. 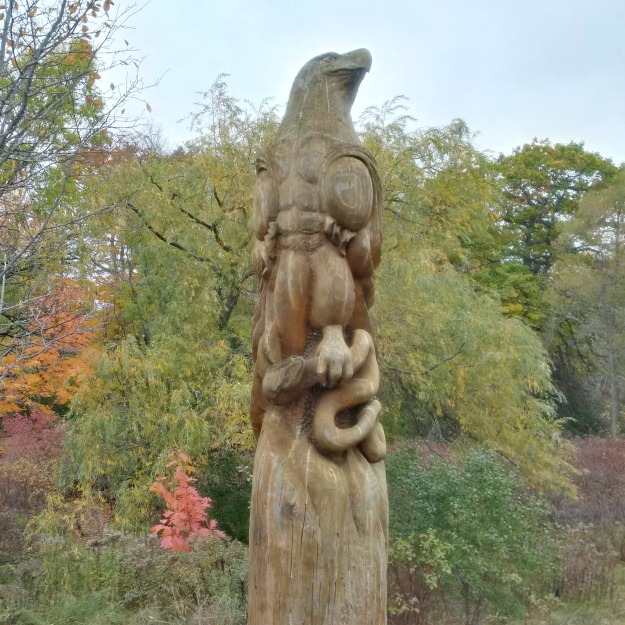 The Sentinel.  Some cultures think that the crane is always alert.  They say it rests with one leg raised and a pebble held in its claw.  If it starts to fall asleep the pebble falls and the crane wakes up.

The Hibou, or Owl, is believed by some to be an omen of ill portent.   They symbolize death and mourning to those people.  Others see the owl as a symbol of knowledge and wisdom because of its ability to see at night. 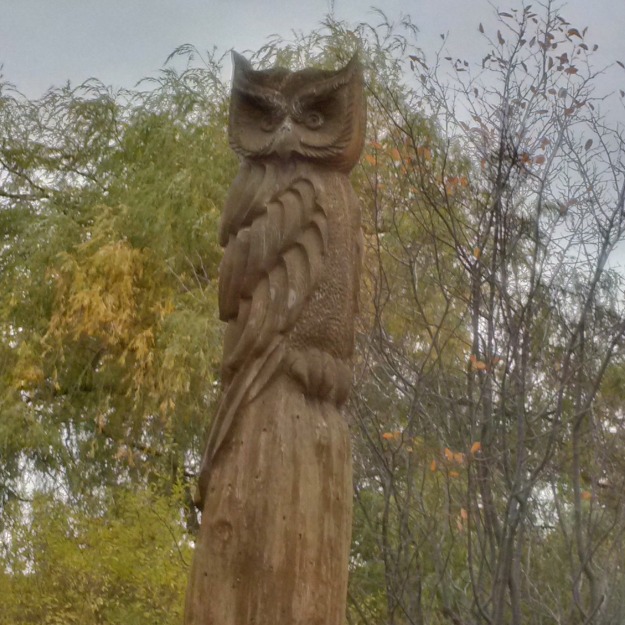 The Moirai are three sisters who represent the past, present, and future of our lives.  At the top of the pole is Clotho who spins the thread at the start of our lives.

Atropos weaves the thread of life into our actions while at the bottom Lachesis cuts the thread at the end of life.   Together these three are known as The Fates.

The Parson is a man of God and a man of Peace.  He represents the role that religion played in the lives of the people who settled here. 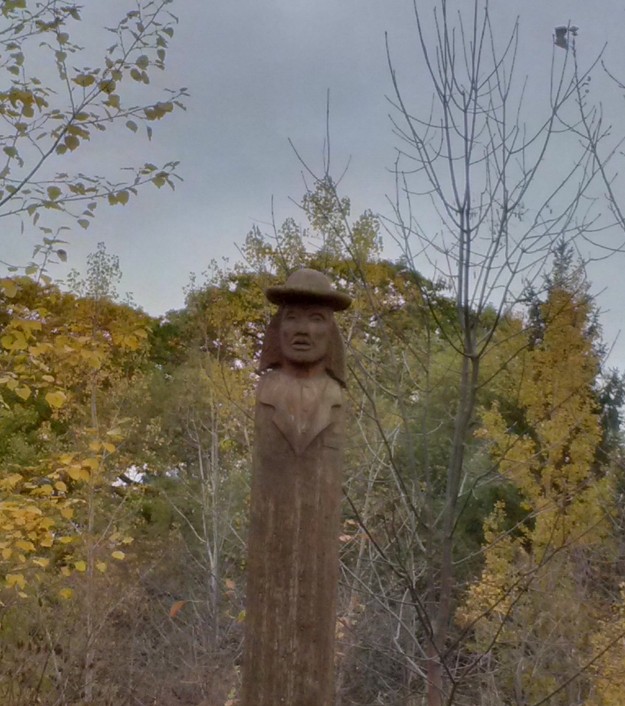 Spring.  When Persephone was abducted by the lord of Hades her mother, who controlled the weather, went searching for her and the result was winter.  Zeus decreed that Persephone could return provided she hadn’t eaten any food of the dead.  Since she had eaten six seeds she was condemned to spend six months per year in the underworld and this is where winter comes from .  When she returns from Hades the spring arrives, or so the ancient Greeks believed.

Twenty telephone poles in two intersecting circles form a ring around The Portal.  They grow in height as they reach toward the centre to symbolize how we grow in strength as a community.

The Portal is at the centre of the design and it is built of post and beam construction similar to the methods used by early settlers.  On the west side of The Portal is the face of a young woman.  She is Vesta the Greek goddess of the hearth and home.  The faces carved into the poles behind represent male and female as well as young and old.

On the east side of The Portal is a cob of corn symbolizing nurturing.  Every kernel of corn on the cob has been carved with a human face.  The various races that call Pickering home are also revealed in the carvings on the surrounding poles. 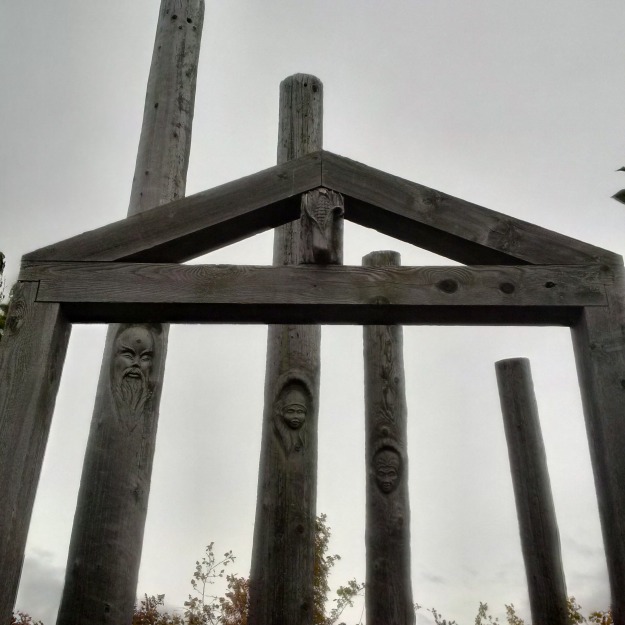 In the Enchanted Area there are several faces carved into the knots on the trees.  As you enter the area you are greeted by Merlin himself.  His face is shown in the cover photo but the carving is starting to be hidden by a new growth of bushes and grape vines.  Elves, fairies, and nymphs are seen in addition to Merlin’s apprentice who is weathering badly. The face of a woman is seen in the tree below.

Here is another face in a smaller knot. 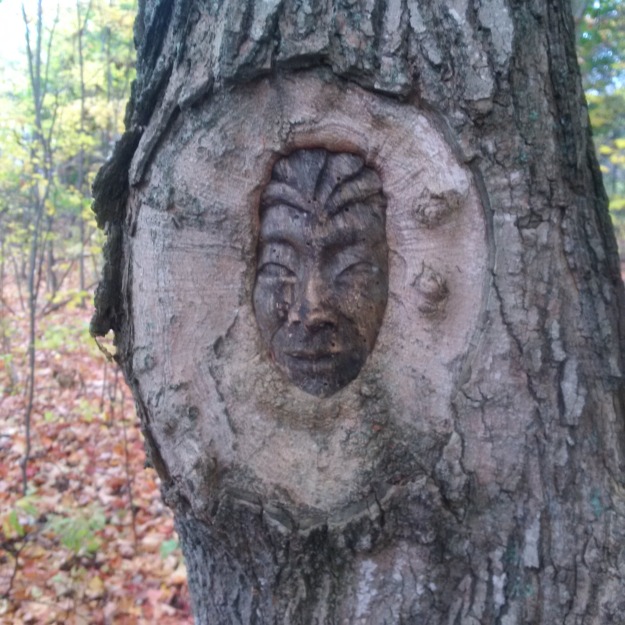