Cardwell Junction came into being in 1877 when the Hamilton and Northwestern Railway (H&NW) made its way toward Barrie and intersected with the Toronto Grey and Bruce Railway (TG&B).  The TG&B was aligned east-west and was set on a berm to control the slope as the railway climbed the Caledon hills.  The picture below shows the berm as it exists today on the north side of the H&NW line.  The name Cardwell comes from the Federal Electoral District of Cardwell that existed from 1867 until 1903 when it was realigned into other ridings.

In order to allow the H&NW to pass under the TG&B a wooden trestle was built.  The wooden trestle was anchored on an abutment made of blocks of cut limestone.  Careful examination of the blocks reveals the tiny marine fossils that it is made of.  The earlier abutment is visible on the south side of the tracks where the rail corridor has been reclaimed for farming uses.  A dark stain in the field, perhaps from coal, shows where the line once ran.

The map below comes from the Digital Archives at McMaster University and dates to 1903. The TG&B had come under the ownership of the Canadian Pacific Railway in 1884 and is shown as yellow on the map.  The H&NW had become part of the Grand Trunk Railway by this time and their property holdings are shown in green.  The two railways had been built using different track gauges and when the narrow gauge TG&B line was standardized in 1882 a connecting curve was built.  This allowed the construction of a shared station where passengers and freight could switch between the lines.  Notice how each company owned their half of the curve.  In 1903 the CPR had a single water tank where their end of the curve connected to the main line.  In 1904 they added a second tank, this octagonal one was a little larger than the first. 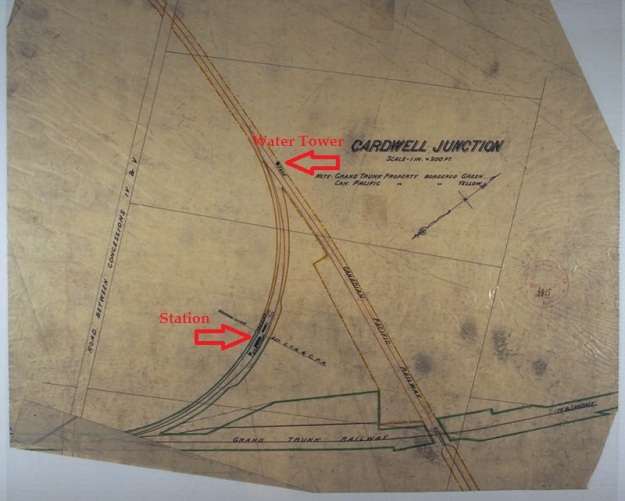 The Google Earth image below has been coloured to show the H&NW which runs just above the yellow line.  The TG&B ran just below the blue line.  They were connected with a curved track that can still be seen just outside the red line.  St. Andrews Road, marked as “road between concession iv & v” on the 1903 map, is crossed by both lines as it heads north.  An abandoned house sits just inside the connecting curve at the lower end.  The shared station must have sat pretty close to where the building with the blue roof stands at the mid-point.

The H&NW was operated by The Grand Trunk Railway before becoming part of the Canadian National Railway network.  The section through Cardwell Junction was abandoned in the 1960’s.  The former H&NW rail bed was purchased by Caledon in 1989 and has been repurposed as a hiking trail.  The Caledon Trailway uses 35 kilometers of the line to create a multi-use path.  The Trans Canada Trail, aka The Great Trail, was started in 1992 as part of Canada’s 125th-anniversary celebrations. When complete it will cover over 24000 km connecting the east, west and arctic coasts. Just over 20,000 kilometers are complete and the goal is to finish in time for next year’s 150th celebrations. My younger brother is commemorated at a pavilion in Calgary. This section shares the trail with The Caledon Trailway at Cardwell Junction. This was the first official section of the trail and Caledon East boasts the first pavilion on the trail.  Walking east from St. Andrews Road the TG&B bridge abutments are the primary reminders of the junction of the two railways.

The charter for the Toronto Grey and Bruce Railway was granted in 1868 with construction beginning the following year.  Passenger service to Orangeville was opened in 1871 with the line being extended to Owen Sound by 1873.  After being operated by the Ontario and Quebec Railway it was finally absorbed into the Canadian Pacific Railway in 1884.  The original trestle was replaced in 1925 with a new one set on concrete abutments.  The earlier abutments on the north side are hidden in the berm but they are still visible on the south side.  The north abutment on the TG&B has a date marker but it is badly worn and hidden behind grape vines for most of the summer.The portion of the line through Cardwell Junction was abandoned in 1932. 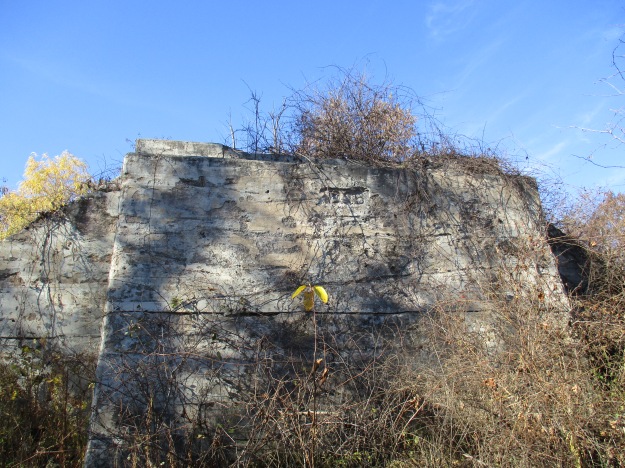 The view from standing atop the rail berm looking south along the TG&B.

This view from a similar position looks to the north where the water tanks once stood.  A brickyard was established at the junction in 1914 under the name of Bowlby Sand, Lime and Brick Company.  Located along the curve, they worked a clay deposit on the side of The Little Credit River until it was exhausted in the early 1920’s.

The view from atop the south abutment looking west along the H&NW railway.  This was a rare shot without people in it as the trail is well used by dog-walkers, cyclists, and joggers.

In 1893 Cardwell Junction had a population of 29 and by 1908 it had dropped to just 20. There are still houses visible on the Cardwell Junction curve but they are on private property.  From the hiking trail, one abandoned and slowly decaying house can be seen through the woods.

Bulrush, or cattail, seed hairs were used by some native peoples to line their moccasins with.  One Native American group used a word for the hairs that meant “fruit for papoose’s bed”.  It was also used for diapers, baby powder, and cradle boards.  It can be used in emergency situations to get a fire started.

On the west side of St. Andrews Road a gate now closes off the right of way from the former TG&B.  The rail allowance on the east side of the road is quickly being overgrown. Continuing west from here the rail line makes its way to the site of the Horseshoe Curve where a deadly accident occurred in 1907.

The trail through Cardwell Junction has an occasional railway spike showing through the fine gravel surface to help remind us of a bygone era.