Taylor-Massey Creek is a tributary of the Don River.  It supplies just 5 percent of the water volume in the Don River but up to 80 percent of it’s contaminants in some conditions.  The Don River has the poorest water quality of any river in Ontario and it is thought that Talor-Massey Creek may be the most polluted watercourse in Canada.  To see what this section looked like today I parked at the end of Underwriters Road where the Underwriters Laboratories (UL) are.  You wouldn’t have to check too many electric devices to find their logo, meaning the product was subjected to a set of safety tests.

A watercourse is normally described in sections that are known as a reach.  It is usual for a reach to extend between two tributaries.  In the case of Taylor-Massey Creek many of the tributaries have been lost or combined with storm water drains and so the reaches have been established based on major roads and the neighbourhoods through which it flows. This little hike looks at the section known as Reach 8 – Underwriters.  The reach extends from Lawrence Avenue (green) south to Eglinton Avenue (purple) and runs through a mainly industrial area.  I’ve marked the historical county atlas to show the original course of Taylor-Massey Creek in blue.  The new channel that was cut in the 1950’s when the area was developed is shown in red.  The “PM” on the map at the top of this reach is the Wexford Primitive Methodist church on Lawrence.  Warden Avenue is grey to give a modern context to the map.

The creek flows between to banks that are about 10 meters apart and 3 meters deep. The slope ranges between 45 degrees and 80 degrees.

There are 30-35 species of wild apples, otherwise known as crabapples.  Apples are members of the rose family and some crabapples are not much larger than rosehips.  The cover photo shows one of several crabapple trees that give colour to the late fall along the side of Taylor-Massey Creek.  Crabapples can be eaten but are often sour.

The trail along the side of the creek follows an old rail alignment.  The industrial spur line entered many of the factories along Underwriter’s Road.  In the 1990’s the city purchased the right of way and removed the rails.  There are still a few sleepers or ties remaining to remind us of the former use of this strip of land.

Historically the Taylor Massey Creek used to drain into post-glacial Lake Iroquois just north of the parking lot in Warden Woods.  The creek has lost all of its original wetlands and the surrounding lands are highly developed.  To be healthy a waterway should have at least 10 % of its area in wetlands.  Water conditions along the creek are aggravated by the pollution which is leeching out of 24 old landfill sites along its course.  A lone alder tree grows along the side of the trail with its male and female catkins.  Alder trees have cones line a conifer but leaves like a deciduous tree.  Over 1,400 trees and shrubs have been planted in this area by local groups and businesses. 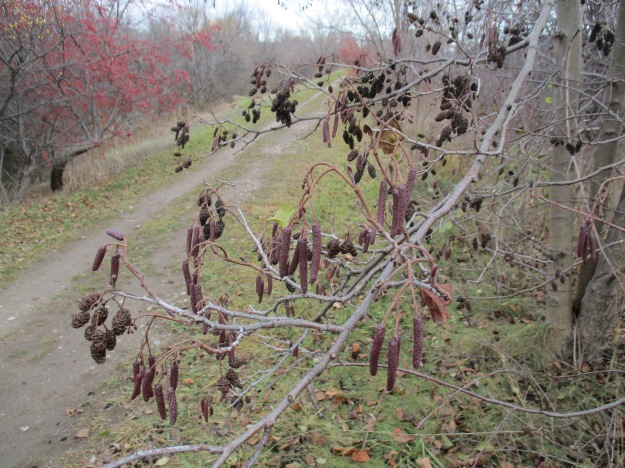 The Taylor Massey Project (TMP)prepared a document calling for a plan for each of ten reaches along the creek.  The idea was to get the city to commit to fixing the top five priorities over a five year period.  A budget of $1 million dollars per year was estimated to be required. The first priority was in reach 10 where the creek originates.  Terraview and Willowfield parks were identified as priority one and that restoration has been completed.  One objective of the Taylor Massey Project is to create conditions where the creeks e-coli levels are in compliance 95% of the time.  This reach was to be renaturalized like the two parks above and have it’s wetlands restored.

In 1842 the Primitive Methodist congregation purchased a quarter of an acre of lands from Anthony Twaddle to construct a log chapel.  The chapel was known as Twaddles chapel until 1857 when the name was changed to The Parsonage Church.  The present brick building was constructed in 1876-1877.  When the Primitive Methodists united with the Wesleyan Methodists in 1883 they refused to join and became a Presbyterian church.  In 1925 the Presbyterians and Methodists joined in forming the United Church of Canada and they ended up with their Weslyan brothers after all.  There is a newer addition on the back which was added in 1955 and the narthex on the older part of the church was added at some point in between.

There is a pioneer cemetery beside the church where the first burial took place in 1837. The former rail line continues north of Lawrence running beside the cemetery.  Turning back I made my way past the car and continued south along the creek.  The trail crosses a green space that contains the Gatineau Hydro line and an east-west trail.  The creek flows through two perched culverts where the old hydro corridor access road passes.  Perched culverts have the outflow end elevated above the stream bed which creates an obstacle for migrating fish.  At the present time this isn’t much of a concern because the creek is dead. Just beyond the culverts, there is a section of the creek bank that has been badly eroded by the flash floods that the creek is subject to. 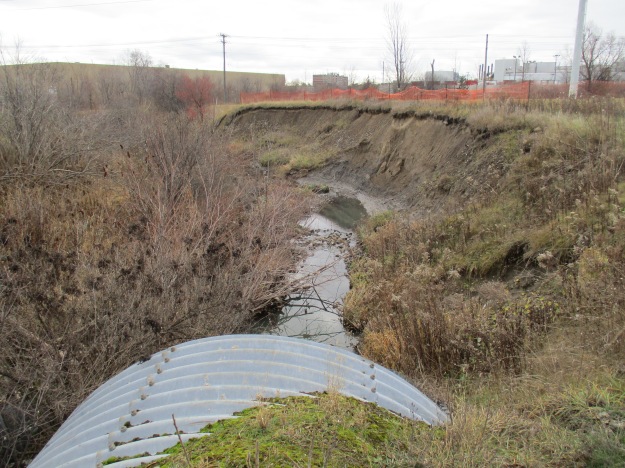 The picture below shows the creek as it flows through a concrete channel in this section of the reach. 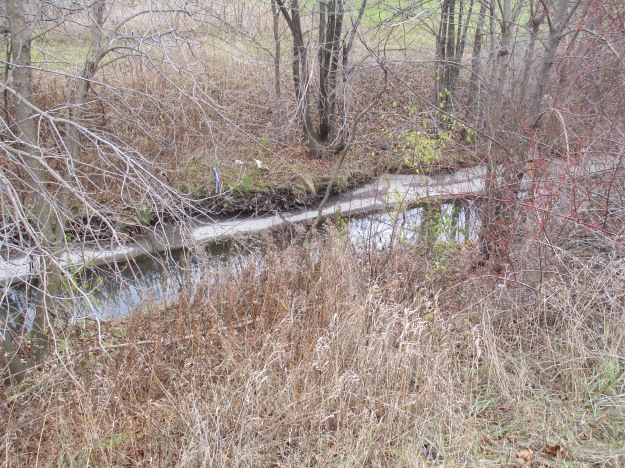 One of the reasons the Taylor-Massey Creek is so polluted is the 252 storm outfalls that carry untreated waste into the creek.  Sewer pipes run along both sides of the creek through this reach and they are not fully separated from the storm water outfalls. Whenever there is a severe storm the water floods through the system and it carries raw sewage into the creek and from there into the Don River and then to Lake Ontario.  This, along with illegal hookups at local industries, serves to foul the creek on a continual basis. The picture below shows the colour of the waste water that is being emptied into the creek.

When the creek reaches Bertrand Avenue it becomes inaccessible.  It has a very deep, narrow channel.  This channel is considered dangerous and has been completely fenced off to prevent people from getting into the area in case of a flash flood that could be deadly.