We parked in the free parking lot on Rutherford Road just west of Pine Valley Drive near the Humber River.  It is possible to hike on minor trails and arrive at Kortright Centre but you will still need to pay for entrance to the sugar festival.  Our TRCA and CVC parks pass includes entrance to the park and festival.  We roughly followed the orange trail marked on this capture from Google Earth.

As we approached the park from the west we passed through an area that appears to have had a campground at one time.  There are several of these hook-ups for water and electricity hiding in the trees. 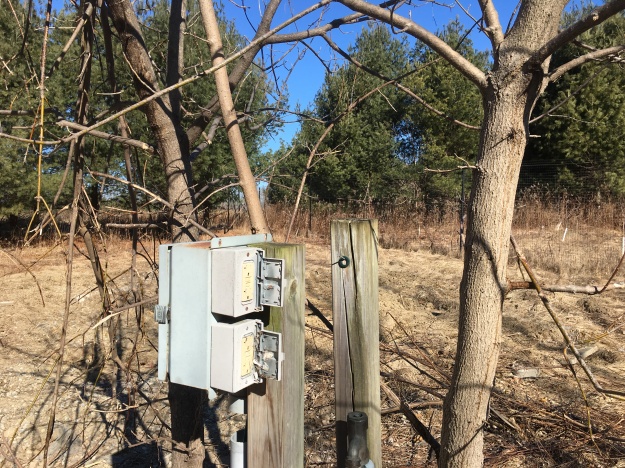 Three concrete pads are set up with the remains of a series of metal animal houses.  We followed the trail from here toward Pine Valley Drive.  Along the way you may hear the call of an owl

The Earth Rangers are a Canadian group aimed at teaching conservation practices to youth.  They were founded in 2004 in Woodbridge to teach students in the GTA.  They have since expanded to a nation wide operation.  Their LEED gold certified building at Kortright Centre is home to Animal Ambassadors.  They now house over 40 animals including red foxes and ring-tailed lemurs.  Their collection of birds includes bald eagles and kestrels. 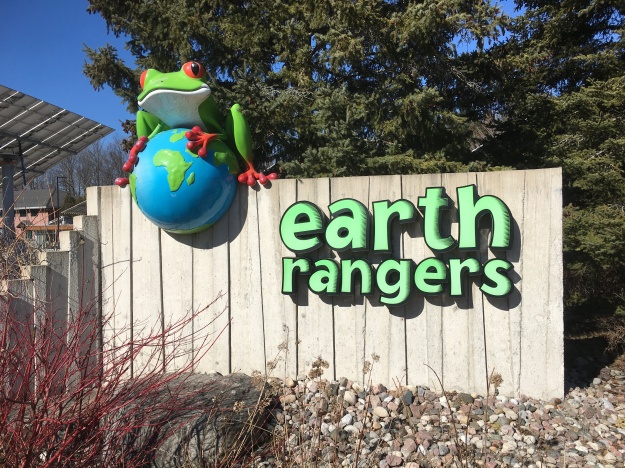 The main attraction at Kortright in March is their Maple Syrup Festival, one of several in TRCA parks across the GTA.  The park has two main forested areas with pine trees forming the north and east portions while maple trees are found in the south and west parts.  Wagon rides are available for those who would like to see the park in relative luxury.

The trail from the visitor centre to the ravine floor follows an old trail that was used by the native people who had an encampment along the East Humber River.  Many artifacts have been recovered from a village that has been excavated.  The river valley provided an access route for goods travelling north and south on The Carrying Place Trail.  Today, the park has provided signage along the trail to teach the basics of maple syrup production to visitors.  The two litre tin for syrup that is attached to this tree indicates the amount of finished product that a tree this size can produce.

Maple syrup was being produced by the natives when the Europeans arrived in North America.  By the 1680’s collecting maple sap and boiling it into maple syrup had become a spring industry.  It was very labour intensive collecting the buckets of sap and carrying them to the sugar shack for processing.  Families would pull their children out of school for the month of March to help on the farm.

Trees would be tapped when they were around 30 to 40 years old and would continue to produce for the next 60 or 70 years.  Holes in the tree are quickly healed and can be seen for years after.

At the sugar shack wood was stock piled to keep the kettles of sap boiling.  The shacks also provided some small shelter from the weather and a place to rest during the cooking process.

Prior to the 1850’s a series of three kettles were used.  The larger kettle contained the raw sap and it was left to boil for 8 hours.  The condensing sap was then transferred to the middle kettle for another 8 hours.  It would be finished in the third kettle after another 8 hours.  Innovations began after this time starting with larger, flat bottomed pans that increased the surface area available for evaporation. 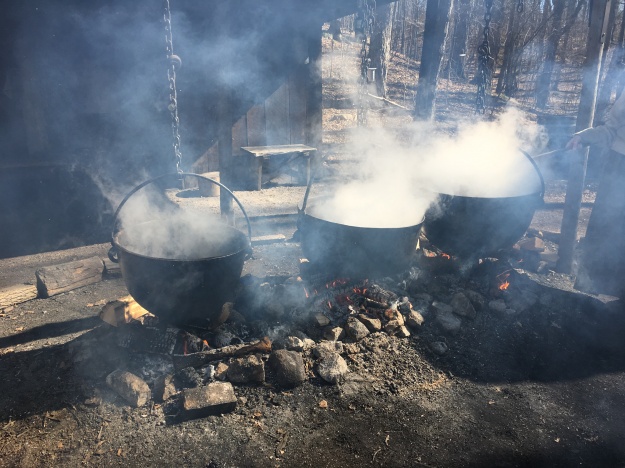 In the 1970’s a system of collecting sap using plastic tubes was developed.  It allows individual trees to  be tapped in one or more places and the slow drip of sap is fed into increasing diameter pipes until it reaches the sugar shack.  In the shack it is stored in a large vat while it waits to be evaporated into maple syrup.

Today’s evaporators have flues in the bottom which increase the surface area of the pan that is used for boiling.  This further reduces the processing time which can be as little as 3 to 5 hours.

Kortright Centre has many trails and there will need to be another expedition one day to investigate them.