Boyd Conservation area contains sections of two closed roads as well as the remains of an old mill dam.  There are several parking options but we chose to park in the lot on Rutherford Road just west of Pine Valley Drive, near the Kortright Centre for Conservation.  The East Humber River was flowing high and dirty in the wake of the past week of ice storms but the morning sunshine cast our shadows on the river.

Lot 12, concession 7 (outlined in black) was owned by Samuel Smith in 1860, perhaps the same man that also owned the 1000 acre estate on Lakeshore Road that is now known as Colonel Samuel Smith Park.  We had parked in lot 16 and followed the trail south as it crossed the river twice on foot bridges.  We continued south in search of the historic bridge in Boyd Conservation Area and then followed Pine Valley Road north through the closed portion along lots 14 and 15.  Our route is marked in green on the county atlas below.

Running through the middle of the property is the proposed route for the Toronto and Georgian Bay Ship Canal.  The canal was proposed as early as 1837 and surveys were made in the 1850’s to determine a possible route.  The canal was never built and but the proposal stayed open until 1906 when it was finally shut down.  A bridge abutment stands just downstream from Rutherford Road.  This is from an earlier alignment of the road and may have served as access for the grist mill shown at Elder Mills on the map.

A small tributary flows out of Kortright centre and into the Humber River.  The water from the melting ice is running clear until the point where it mixes with the dirty water of the river. 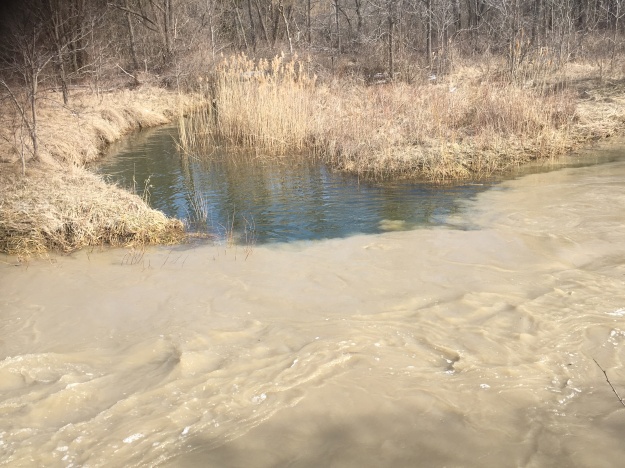 As we were watching, a beaver crawled out of the water on the far side of the river.  He had a look around and, deciding that he didn’t want to be in a blog, jumped back into the river.  It turns out that it was too late to avoid being published.

The map shows the mill pond that supplied a steady flow of water to power the saw mill on Samuel Smith’s property.  The mill dam would have been made of a wooden crib filled with rocks and was replaced with a concrete dam sometime in the early 20th century.  The remains of the dam can be found on either side of the river.

An old pump house stands beside the river near to the former right of way for Langstaff Road.

Langstaff Road has had several bridges over the East Humber River.  The earliest ones were made of wood and lasted for twenty years or so before needing major repairs.  By 1923 the bridge was in need of replacing and renowned engineer Frank Barber was brought in to design a concrete replacement.  In 1914 he had designed the concrete bowstring bridge over the river at Major Mackenzie Drive.  In 1923 he also designed the bridge on Kirby Road.  The single lane bridge at Langstaff was closed in the 1970’s when the road was widened and moved a hundred metres south.  Today there are large pieces of the concrete missing and the underside drips rusty water from the exposed steel reinforcing rods. 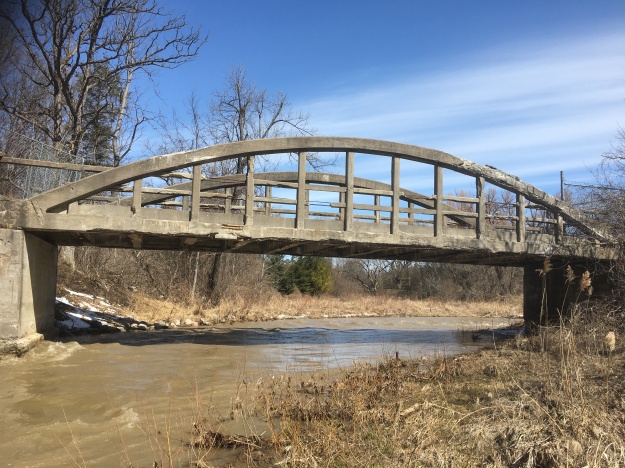 The bridge is closed to pedestrians because it has a large hole in the deck and is considered hazardous.  The bridge is listed as a property of interest on the heritage register and the intention is that it may eventually be given a full designation.  Extensive erosion immediately upstream from the bridge threatens the public works yard located there.  The stream has been rehabilitated following a 2014 assessment that showed damage from the 2013 flooding had placed both the public works yard and the historic bridge at risk.

From the bridge we followed a small roadway out to Pine Valley Drive where we found a closed gate keeping us in.  After following the fence a short distance we came to the dividing line between Concession 7, lot 12 and 13.  We very often find square metal posts that mark the corners of the surveyed lots.  This was the second time that we found a limestone marker.

The fence continued until a point where the maintained part of Pine Valley Drive ends and the former right of way continues along lots 14 and 15.  Boyd Conservation Area was created in 1957 and includes the right of way for the closed road.  Overlapping with the conservation area is an Area of Natural and Scientific Interest (ANSI) designated because of the pine forest habitat and the extensive wetlands.  The closed portion of Pine Valley Drive, pictured below, is little more than a trail in many places and has been badly eroded by water flowing down the middle of the roadway. 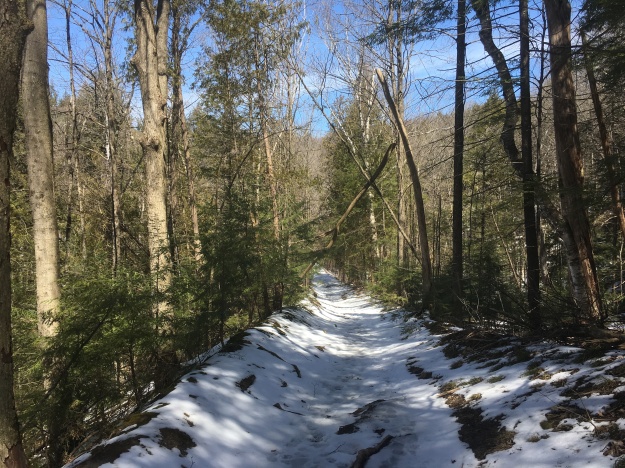 Large patches of Coltsfoot were blooming along the trail, looking like dandelions without the leaves.

Boyd Conservation Area is a favourite place for summer picnics as well as being a significant stopover for migratory birds as they pass through the city.