There are currently five  sets of city built stairs climbing the escarpment in Hamilton.  In addition to the stairs in this post, there are also stairs at James, Wentworth and Kenilworth Streets.  The Chedoke Stairs and The Dundurn Stairs are close enough together to form a convenient loop using either The Bruce Trail or The Chedoke Radial Trail.  A short section of road is also needed to complete the walk. 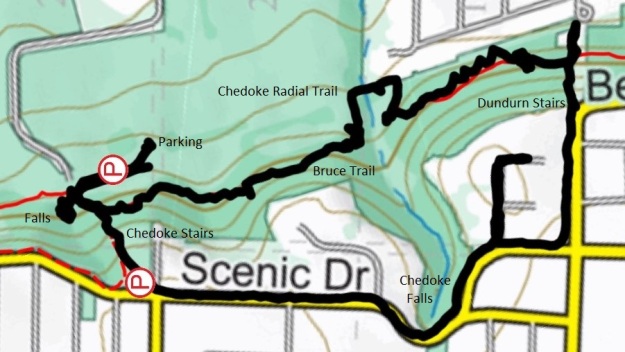 We decided to climb the Chedoke stairs because there is a convenient parking in a lot shared with the Chedoke Golf Club and the trail of the same name.  The stairs consist of 289 steel steps with a bicycle trough on the side to make it easy to bring your bike along.  The stairs are divided with a central handrail.  The first step has been labelled “Welcome to paradise” and every few steps from there to the top has another encouraging quip.  It may be a little tongue-in-cheek as the top of the stairs is in Upper Paradise, you just need to ascend the stairs to get there.  The stairs have been numbered every so often to keep you on track as you climb.

To the right of the stairs are two waterfalls that have not been posted as No Trespassing.  These twin tributaries of Chedoke Creek meet at the point where their respective courses drop over the Whirlpool Formation which is a harder layer of dolomite above the Queenston shale that marks the bottom of the escarpment.  Many of the escarpment waterfalls have an upper and lower falls.  The lower falls usually drop over the same layer of escarpment, a trait they share with The Devil’s Punch Bowl whose lower falls look very similar to these two falls.  Lower Cliffview and Lower Westcliff Falls have an upper falls that we did not explore on this adventure.

Lower Westcliff Falls is the right hand of the two falls.  It drops 9 metres and has a crest width of 6 metres.  There is a small cascade at the top of the falls that must be quite impressive when the water flow is greater.

Just to the right is the crest of Lower Cliffview Falls.  It is 4 metres high and 3 metres wide making it a little less impressive than its sister falls.  It also has an impressive shale washboard above the falls which makes another great cascade when there is more water in the creek.

Returning to the stairs we made our way to the top into Cliffview Park.  From here we followed Scenic Drive to the left and made our way to Chedoke Falls.  The falls emerge just beside the fence and the only upper view is of the water cascading toward the crest.  There are three no trespassing signs including one banning fence climbing.  Apparently these are ineffective at keeping people out of the gorge as there was also a uniformed by-law officer standing beside me as I took the picture below.  Under close scrutiny we left and made our way to the Dundurn Stairs.

We made a detour onto Balfour Drive thinking there might be access to the park but there isn’t.  We returned to Garth Street to access the Dundurn Stairs.  656 Garth Street is also known as the Stone Cottage and is owned by the Ontario Heritage Foundation and was rented to the city for $1,750 per month on a thirty year lease which began in 1979.  It was built in 1845 and displays quite a different architecture to the other houses that surround it.

The Dundurn Stairs were originally built from wood but replaced in the 1990’s with 326 steel steps.  These stairs are single lane without a bicycle trough which means that a bike must be carried up or down the stairs on your shoulder.

We took the stairs to the bottom where they meet the Chedoke Trail back to the car.  Retracing our steps brought us back to the crossing of the Bruce Trail which we used to return to the Chedoke Stairs. 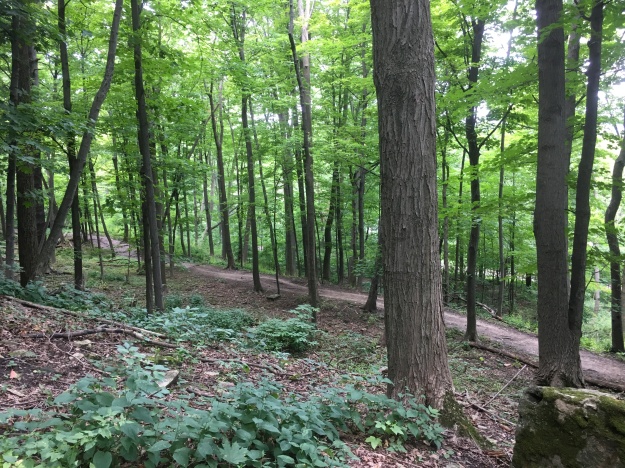 Someone has set up a tent in a hollow along the side of the trail.  While he may be hidden, it could get flooded in a hurry if a rainstorm passes through.

With at least three unexplored waterfalls, there will likely be another trip to this neighbourhood at some point in time.