Altona Forest is located in Pickering and at 102 acres is large enough to have one of the few interior forests in the GTA.  Interior forests create habitat for creatures that do not survive on the forest edge or in the small clumps of trees left along waterways.  Interior forests have at least 300 metres of forest between the forest edge and the interior section.  Since 1982 the forest has been designated an environmentally significant area but that didn’t stop developers from buying up the land.  In the 1990’s after much lobbying the park area was set aside as part of the Toronto Region Conservation Authority (TRCA) lands.  The southern portion of the park was most recently owned by Dr. J. Murray Spiers and was donated in 1996 upon the condition that it remain a nature preserve.  This portion of the park is off limits to the public.  We parked on Altona Road in the small Altona Forest parking lot.  The trail immediately gives a feeling of not being used very much. 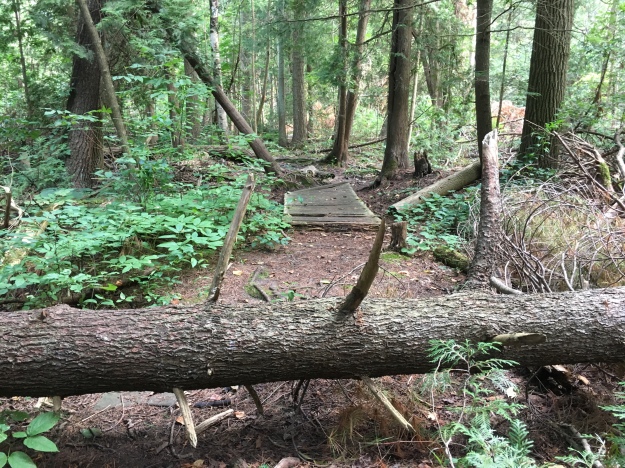 Petticoat Creek flows through the western edge of the park.  It was named by the French as Petite Cote and was slurred into the current name after the English arrived.  The wind has recently brought down several large trees in the top end of the park.

One of the truly great things about Altona Forest is the downloadable trail guide.  It describes the various features along the trail with reference to the guide posts.  Post 32 is shown below along with a little bench, one of many scattered throughout the trails.  Post 32 is found in a mature white cedar forest.  These trees spread to form a dense canopy that very little direct sunlight gets through.  This, along with a mat of cedar needles on the ground, combine to create a forest with very little under story.

Altona Forest has a series of ever changing habitats moving from different types of forest cover to open meadows and wetlands.  This encourages a wide variety of wildlife, some locally rare examples, to inhabit the park.  We saw coyote paw prints but didn’t see any of them as we made our way through the forest.  They share the forest with white tailed deer, fox and opossum, just to name a few.

Overgrowth has choked out the boardwalk in several places and the purple loosetrife and goldenrod flowers were buzzing with bees.  The number of honey bees was very encouraging but it could be a little stressful for those with a bee phobia or allergy.  We found that although we brushed through the bees as we passed they ignored us and returned to their bee business.

The wetlands were filled with the sounds of frogs and last years bulrushes hang like shrouds on the old stocks.

Near post 29 a large section of the forest has been given over to a wetland restoration project.  Until the 1940’s these were farmers fields and many of the wetlands had been drained.  Small mounds of dirt along the sides of the Rosebank Creek tributary remind us of the efforts of the farmers to increase drainage and make the most of some poor farmland.  Ghost wetlands are areas that were drained but can be encouraged to return to their former status thus providing much needed wetland habitat.  An observation deck overlooks the wetland restoration.

We were quite surprised at the condition of the boardwalk in the northern section of the park.  It soon became clear that the vegetation overgrowth was the result of a general lack of use due to the deterioration of the trails. 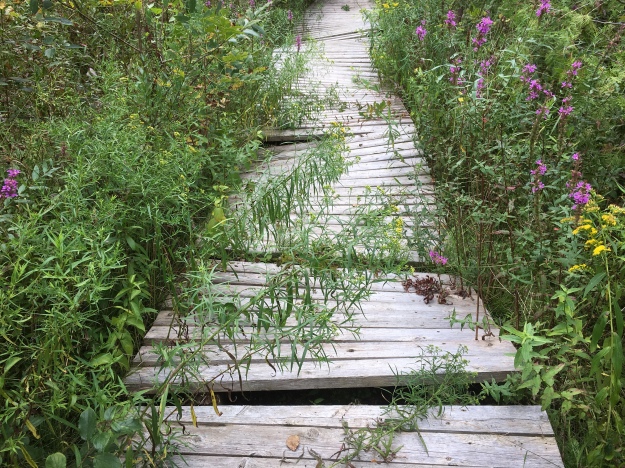 Chicken Mushrooms are one of the fine edible ones, if harvested when they are young.  They tend to become indigestible as they get older.  They start as bright orange, salmon or sulfur yellow and as they weather they turn white.  They are also called Sulfur Shelf and can grow in overlapping clusters of fifty or more with shelves that weigh up to a pound.  Many people claim that they taste like chicken.

Near post 12 is Lacey’s Pond but it has become inaccessible as has the observation deck located there.  Some of the downed trees are the result of wind storms while the local beaver has also brought down some onto the boardwalk.  This effectively cuts the northern section of the park off from the one to the south. 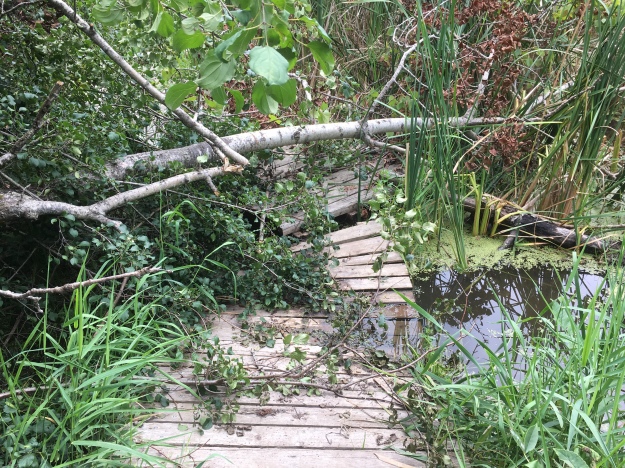 Having blogged about nearly every destination in the list of TRCA properties several things become obvious.  Firstly, the GTA has an incredible network of ravines and parks that form natural wildlife corridors through the urban area.  Much of this is the legacy of Hurricane Hazel and the movement to secure our flood plains from development.  Secondly, our parks are incredibly free of garbage and generally well maintained.  Altona Forest appeared to be an obvious exception with regards to maintenance.  Hiking the GTA contacted the TRCA to see what was happening with the trails in the forest.  They replied that the boardwalks deteriorated because of the wet conditions and that they are being replaced with materials made of recycled plastics.  Supplies for the restoration, which should last for many many years, have been ordered already.  When they arrive in six to eight weeks the restoration project will begin.  Very soon Altona Forest will boast a new set of boardwalks giving it a new lease on life. 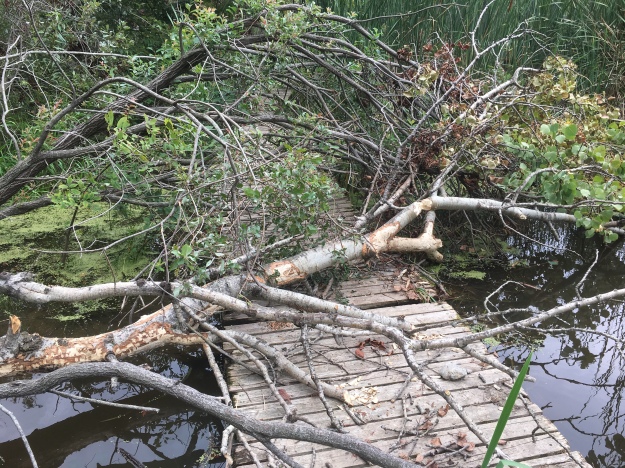 This Hairy Woodpecker is similar to a Downy but larger, with the adults being about 25 centimetres long.  Downy Woodpeckers are only about 15 centimtres long.  Both of these woodpeckers leave small random holes in trees where they dig for insects.  If the holes in a tree are dug in straight lines it is the work of a Yellow Bellied Sapsucker. 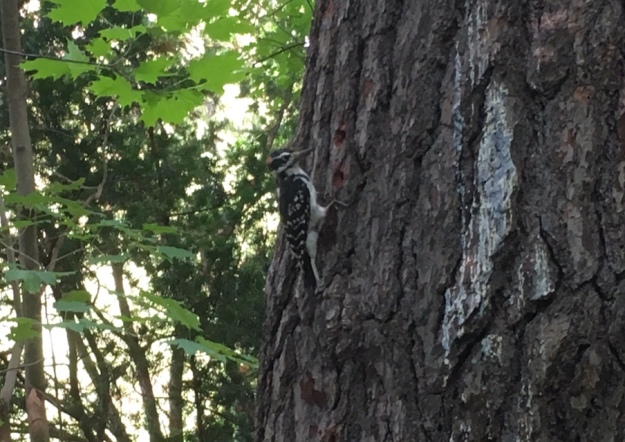 Large holes in trees are the work of pileated woodpeckers.  These are the largest woodpecker that you will see in Ontario with the adults being about 50 centimetres long.  The name comes from the Latin word “pileatus” which means capped, in reference to the prominent red cap that the bird has. 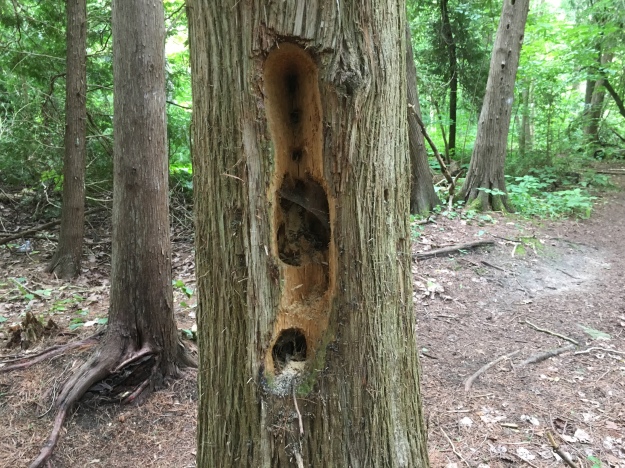 We were only able to explore the northern section of Altona Forest and will need to return to check out the other end of the park. We also look forward to seeing the upgrades and repairs that TRCA will be making this fall.