The Forks of the Credit has a lot of interesting history, much of which can be easily accessed from The Bruce Trail or one of several side trails in the area.  Parking is very limited along the side of Forks of the Credit Road near Dominion Street.  Our intention was to cover both the Trimble Side Trail and the Crow’s Nest Side Trail as well as having another look at the Stonecutter’s Dam.  The map below comes from the Belfountain Conservation Area Management Plan and shows the Trimble Trail in brown and the Crow’s Nest Trail in Blue.  It also shows the location of many of the historical features of the Willoughby Property.

We saw several people going down the road on skateboards with a vehicle following them to take them back to the top for another joy ride down the hill and around the hairpin turn.  The Trimble Trail enters the Willoughby Property beside the river.  There is a great deal of local history on the property which had been explored and described in our previous post called Stonecutter’s Dam.  Therefore we won’t go into much of that detail again here.  From the vantage of the trail you can see the curving trestle of the Credit Valley Railway that was instrumental in developing the market for the sandstone that was being quarried in this area.  We looked at that trestle and an old lime kiln ring in our post on The Devil’s Pulpit. 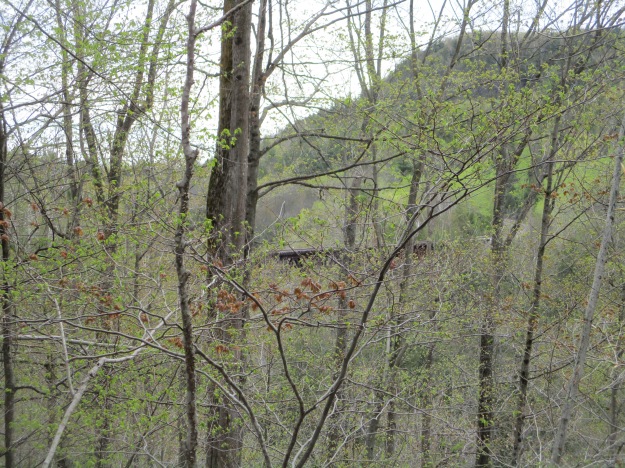 Jack-in-the-pulpit is one of the longest lived perennial plants as the corm can survive for up to 100 years.  The plant contains oxides in the form of raphides that cause a burning sensation if ingested.  Under magnification they resemble tiny shards of glass.  One folklore tale suggest certain native people would poison meat with the cut up corm of the plant and leave it for their enemies to find and consume. 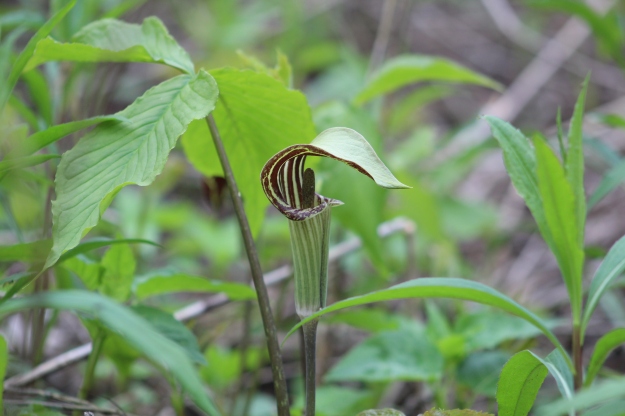 At one time there were literally hundreds of dams strung across the rivers and creeks in the GTA.  Early ones were often wood cribs filled with rocks and required annual repairs that were often quite dangerous.  Earthen berms were built across the floodplains and later concrete dams were constructed.  Through disasters like Hurricane Hazel and then flood control projects most of these have been removed.  Perhaps the oldest surviving dam is a masonry one on the West Credit River that has come to be known as The Stonecutter’s Dam.  The area was known for quarries and this resource was put to good use here as this bit of workmanship has outlasted many newer dams.

The penstock was also made of blocks of cut stone and has been churning away for decades since it last supplied power to a local industry.  There remains no plans to restore this dam and it has become inaccessible due to erosion along the end.  It is now posted to keep people from finding their way onto it.  More pictures of the dam can be seen in our earlier post The Stonecutter’s Dam.

The Crow’s Nest Side Trail is a 1.1 kilometre loop that takes you around some test pits from the old quarry but avoids the original site.  It leads off the Trimble Trail on a boardwalk but soon turns into a dirt path.

Dryad’s Saddle can grow to be up to 12 inches across and can be found from May until about November.  They are considered edible and we found places where people had recently harvested them.  Also known as Pheasant’s Back the soft edge parts of the cap can be sauteed and eaten.

The trails were remarkably empty considering how nice the day was.  That is usually a good thing if you are hoping to see the local wildlife.  The Trimble Trail had people coming and going from the conservation area but the Crows Nest Trail was deserted. 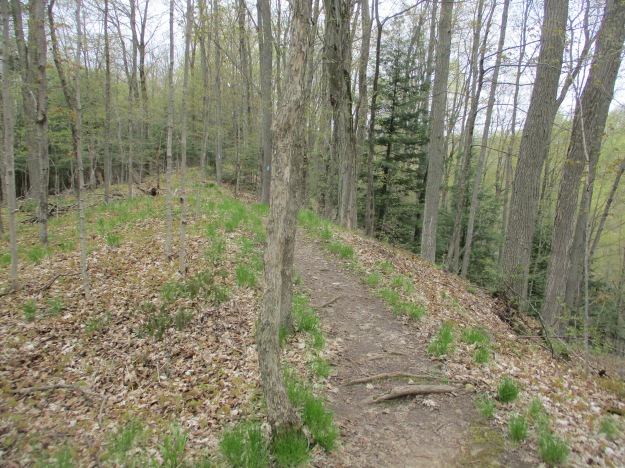 A fence line separates the Crows Nest Trail from a steep drop onto Forks of the Credit Road.  In many places this fence has become secured to the trees which have grown around it.  The picture below shows one of the trees with a fence roughly in the middle of the tree.

There were white trilliums scattered throughout the woods but the red ones were somewhat more elusive.  Finally we came across a large patch of them as we approached Belfountain Conservation Area.  The red trillium does not have any nectar and so isn’t pollinated by the same assortment of bees and insects that visit the white ones.  They rely on flies that are attracted by the smell of rotting meat that is given ff by the leaves.  On close inspection the six stamen in the centre of the flower are different to the nectar bearing ones on the white flowers. 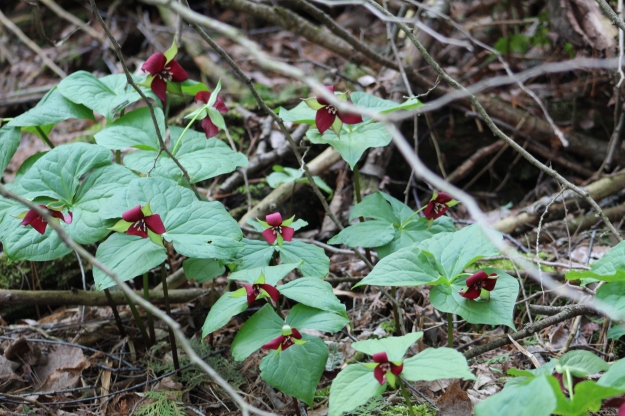 We checked out a small trail beside the bridge and found that it led to an apiary.  With our bee colonies in severe decline we decided not to interfere in any way.  Although the trail may have gone further we didn’t.  Instead we made our way back to the car.

The Willoughby Property is interesting because of the wealth of history that it holds.  It is the type of place that you can still find new things with subsequent visits.

Check out the top 20 posts from the first five years of Hiking the GTA at this link:

Back Tracks – The First Five Years