A chilly start to the day at only 5 degrees.  The sun was out and the sky was bright blue.  To access Sawmill Valley Creek near Dundas and Mississauga road it is easiest to park in Erindale Park and walk across the bridge over the Credit River.

Many of the trees are still green, which is nice.  When the cool evenings of the fall signal the onset of winter, deciduous trees begin the process of collecting and storing the useful resources in the leaves.   The tree stores the green chlorophyll pigment and other photosynthetic parts of the leaf in the roots, trunk and branches of the tree for use again the following spring.  The removal of the green from the leaves produces the bright colours we enjoy.

Sawmill Valley trail enters the north west corner of Mississauga Road and Collegeway.  As you follow the trail you will soon come to the start of a fence.  If you follow to the right of the fence you will find yourself on an old winding laneway.

This is the laneway of Roy Ivor, also known as the birdman of Mississauga.  In 1928 Roy, along with his assistant Bernice Inman-Emery, started the Winding Lane Bird Sanctuary.   During the 50 years he ran the bird sanctuary he cared for thousands of birds.  He was a regular contributor to National Geographic during the 1950’s as well as teaching countless school children about birds.  Ivor died in 1979 shortly before he would have turned 100.  He is buried close to home at St. Peters Anglican Church in Erindale.  Bernice ran the sanctuary from the time of his death until she moved to a retirement home in 2007.  The sanctuary has been closed since then and all of the bird cages have been removed.  Recently the property has been purchased by the city for incorporation into the adjacent parkland.

Ivor’s house is featured in the cover photo showing how it looked before it burned down on December 29th 1970.  A portion of the large central chimney remains standing. 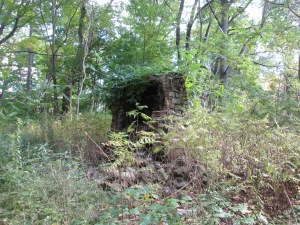 The outline of the east wing of the house is still clearly visible.  When the house burned down a trailer home was brought in and parked over this end of the foundation.  Here life went on pretty much as it had before. 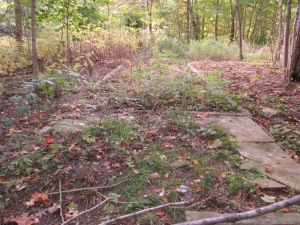 Each Burdock seed pods contain hundreds of stems that stick to clothing and fur.  Inside the pods are little tiny seeds that get transported around and then discarded to start new plants elsewhere.  In the early 1940’s Swiss inventor George de Mestral was out walking his dog when both of them got covered in burdocks.  Curious about how the burdock attached itself to his clothes he looked at one under a microscope.  He noted the little hook on the end of each one of these little spines.  De Mestral patented Velcro in 1955 based on the hook and loop system used by burdock.  The hooks can clearly be seen on the burdock in the picture below.  Inside the burdock pictured below is a lady beetle.  There are over 5,000 species of lady beetles but all are protected by noxious body fluids based on cyanide.  Their bright colours are used as a warning to birds that might consider eating them. 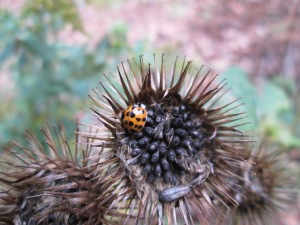 Geo-caching is an activity that rose to world popularity in May 2000.  When GPS restrictions were removed a high-tech game of hide and seek began.  A cache is hidden which includes a log book, pen or pencil and often trinkets.  People hunt for the caches based on a set of co-ordinates using a GPS.  When the log book is found it is signed and carefully re-hidden.  Geo-caching never achieved the prominence that is made possible in the era of cell phones with GPS.  One possible explanation for this is 9/11.  Security scares have become common with police bomb squads having been called in after suspicious activity has been reported.  Several schools and even Disneyland have been locked down.  We found a geocache with a skeleton in it.  Since we were the first to find the cache, and that quite by accident, the skeleton may be symbolic of a dead pass-time.

Other Erindale hikes featured on the historical atlas below include: