The weekend seemed like a perfect one to go for an extended hike using two cars.  We chose to complete about a third of the Elora Cataract Trail running between Hillsburgh and Cataract, a distance of about 18 kilometres.  The east end of the trail can be found at Mississauga Road although the former right of way continues east from there.  Based on the trail map we determined that we should leave one car at The Forks Of The Credit Provincial Park.  The roadway into the park is in horrible shape and the pot-holes will threaten to rip the front end out of your car.  Having braved the lane way you will find that $14.50 is the full day parking fee.

The Credit Valley Railway was built in 1879 to connect Toronto with Orangeville.  A branch line was also built between Cataract and Elora but it was only operated under the original name for four years before it became part of the Ontario & Quebec Railway.  In 1884 it was leased to the Canadian Pacific Railway where it became known as the Elora Subdivision.  A hundred years later in 1988 it ceased to operate and the rails were removed. It only sat abandoned for five years before it was purchased by the Grand River and Credit Valley Conservation Authorities.  They have developed 47 kilometres of the right of way into the Elora Cataract Trailway.  We parked the second car for free at the trail head on Station Road in Hillsburgh, the site of the former railway station in town.  The Hillsburgh Pond was originally created to serve the two grist mills in town.  The Caledon Mountain Trout Club bought the pond in 1902 and sold it to the Guelph Fishing Club in 1946.  Today there is an ongoing debate about the future of the pond and dam as restoration is required and the pond may be drained instead.  This old green shed, like the boathouse in front of it is collapsing into the pond. 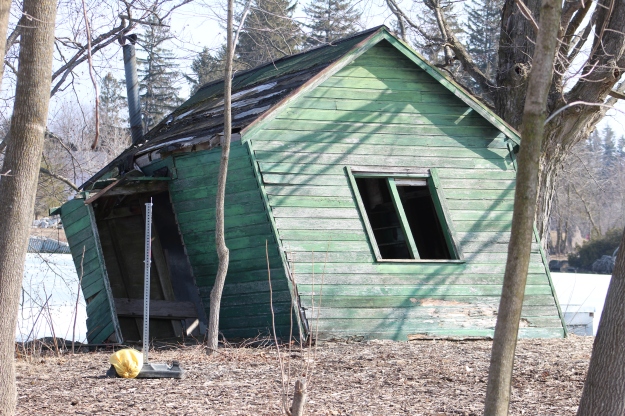 The property beside the train station used to have a set of ramps for loading livestock onto rail.  A wind mill can be seen in the back of the old Awrey house which has recently been expanded to become the new library. 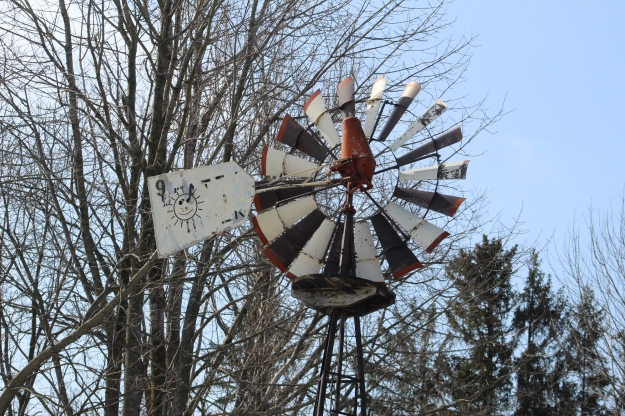 Although we had chosen a stretch of trail that ran for 17.5 kilometres it was all pretty level as long as we were following the railway right of way.  Only later when we got back to the Forks of the Credit Provincial Park and found an extensive set of stairs to climb did we realize that starting at Cataract would have allowed us to descend those stairs instead of climbing them at the end of the hike.  The trail still had snow and ice on it where the hard packed trail was sheltered from a lot of direct sunlight.

The red squirrel uses his tail for balance and to control his jumping.  When they are upset or feel threatened they also use it for communication.  When it gets cold and they need a blanket to snuggle up with they use their tails for this too.

After leaving Hillsburgh the trail crosses a couple of side roads before coming to the town of Erin.  The railway ran along the northern edge of town where the rail station used to stand.  At Shaws Creek Road you come to the old Pinkney Farmhouse which was built in 1886.  Fifteen acres of the Pinkney property was used for a large gravel pit and the current owners are Lafarge Canada who might be interested in restoring the house in exchange for increased quarry rights.  The Pinkney barn was in poor shape and was demolished last year. 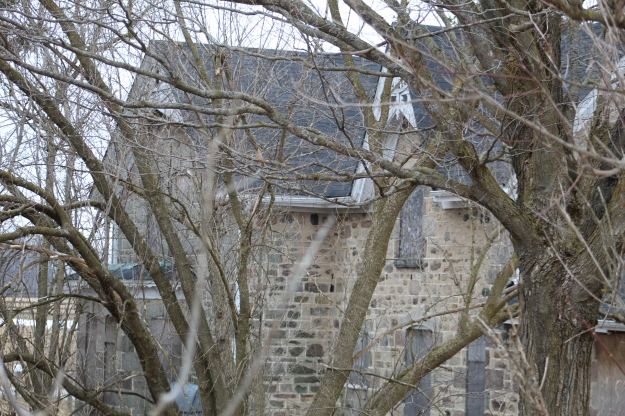 The trees are growing back in so that in some places they may offer a little shade on the summer.  When this was a active steam railway the trees would have been kept trimmed back for the full property width to help discourage fires caused by errant sparks.

The trail ends at Cataract Road but we were still several kilometres from the car.  Based on the signs at Mississauga Road you could park there and walk the short section to the end of the trail.  This would be a lot shorter and considerably cheaper as well.

The Credit Valley Railway line continued east to connect with the Orangeville line.  Where it is not used as the trailway it isn’t maintained or improved but it is still quite passable.

Two of our previous posts, Forks of the Credit Provincial Park and Cataract Electric Company, tell the history of the mills in the park.

A few signs of the old railway still remain including old sleeper ties thrown along the sides of the trail to rot.  For long sections of the trail some of these ties have been used for fence posts by the local farmers.  Inside the Forks of the Credit Provincial Park an old telegraph pole still marks a bygone era. 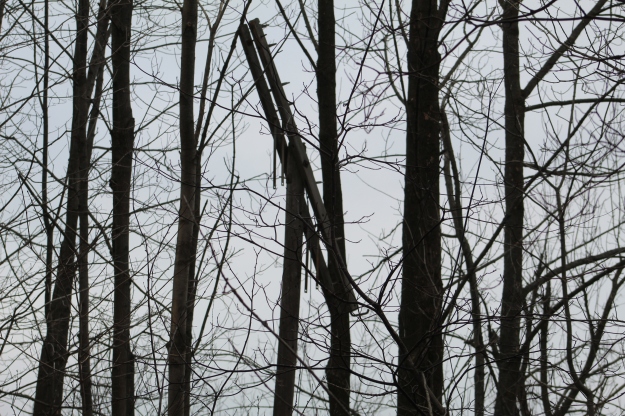 Coltsfoot looks similar to a dandelion but has no leaves at the time of the flowers.  Once the flowers have faded the leaves will come out for the summer. 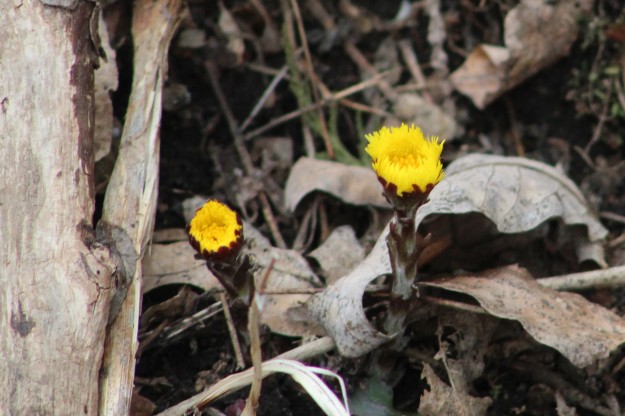 Having covered about one third of the Elora Cataract Trailway we intend to return a couple more times to complete the trail in its entirety.