Heart Lake Conservation Park is the largest green space in Brampton. We previously looked at the formation of Heart Lake and the park in our story Brampton’s Kettle Lakes so we won’t cover much of that in this post. Heart Lake Conservation Park opened in 1957 and has been a popular spot for fishing and family outings ever since. We revisited it to check out some of the trails. There are six main trails in the park which are made up of the Esker Trail (3.1 km), Lake Trail (3.7 km), Rayner Trail (0.3 km), Terry Fox Trail (1.0 km) and the Wetland Trail (2.5 km) and there’s also a mountain bike trail. The Esker Trail is part of a longer trail that passes north through Brampton. We started by exploring the Wetland Trail which is featured in the picture below.

We then took the stairs down to the boathouse where we could connect to the Lake Trail.

Although we haven’t had any real extended periods of freezing weather, the lake is fully iced over.

It is interesting to see the foot prints and bicycle tracks passing along the ice just behind the “Danger – Ice Unsafe” sign. Over the years Hiking the GTA has tended to stay off of the ice on rivers and lakes based on the theory that we should do nothing while out hiking that would prevent us from going again next week.

The Lake Trail follows the lake and features this stone retaining wall in the area of the boathouse.

Alder trees have both male and female catkins, often on the same branches. They are pollinated by the wind which blows the pollen from the longer male catkins onto the cone shaped female ones. Although the female catkins resemble pine cones the tree is deciduous and loses its leaves every year. Several Alders are growing along the Lake Trail.

Treetop Trekking came to Heart Lake in 2013 and has skill two levels for participants who meet the height requirements. The trek can also be combined with a zipline experience where you will “fly” across the lake. Bookings need to be made in advance and are for groups of four. Smaller parties will be grouped together so that everyone can participate.

Tree Top Trekking at Heart Lake looks like an activity that I will be trying this year and I have three fellow adventurers lined up to join me. It opens in April and there’s a good chance that a future blog could be shot from the tops of these trees.

Heart Lake Conservation Area contains two kettle lakes which formed when the last ice age retreated.  Around 20,000 years ago the Wisconsin Ice Age reached it’s maximum with an ice sheet that stretched from Newfoundland to British Columbia and south to Ohio and Illinois.  In the Toronto area the ice was over 1 kilometer thick or about twice the height of the CN Tower.  The advancing ice acted like a giant ice scoop clearing everything in it’s path.  Melting glaciers it deposited this debris in many ways.  Rivers of meltwater carried nearly straight lines known as eskers and the 7 kilometer long Brampton Esker runs south from Heart Lake.  The debris the glacier contained was left behind in the form of outwash.  Sometimes larger chunks of the iceberg would calve away and get buried by the glacial till in the outwash.  Later, when the ice melted it left behind a hole that would fill with water and be known as a kettle lake.  Both Heart Lake and Teapot Lake were formed in this manner and they both take their names from their shapes.  Island Lake near Orangeville is also a kettle lake but it takes it’s name from a former land owner.  On the 1877 county atlas map below Teapot Lake is missing and Heart Lake isn’t drawn in it’s inverted heart shape.

There are a few free parking places in Donnelley East Park near Sandalwood and Heart Lake Road.  This is the northern trailhead for The Esker Lake Trail which runs south for 8 kilometers.  Walking under Sandalwood Parkway the trail can be shared with more than just pedestrians and cyclists.  This little painted turtle was using the underpass to avoid the traffic above.  The Heart Lake Conservation Area is home to over 250 flora species and 86 fauna, some of them on the protected or endangered lists. 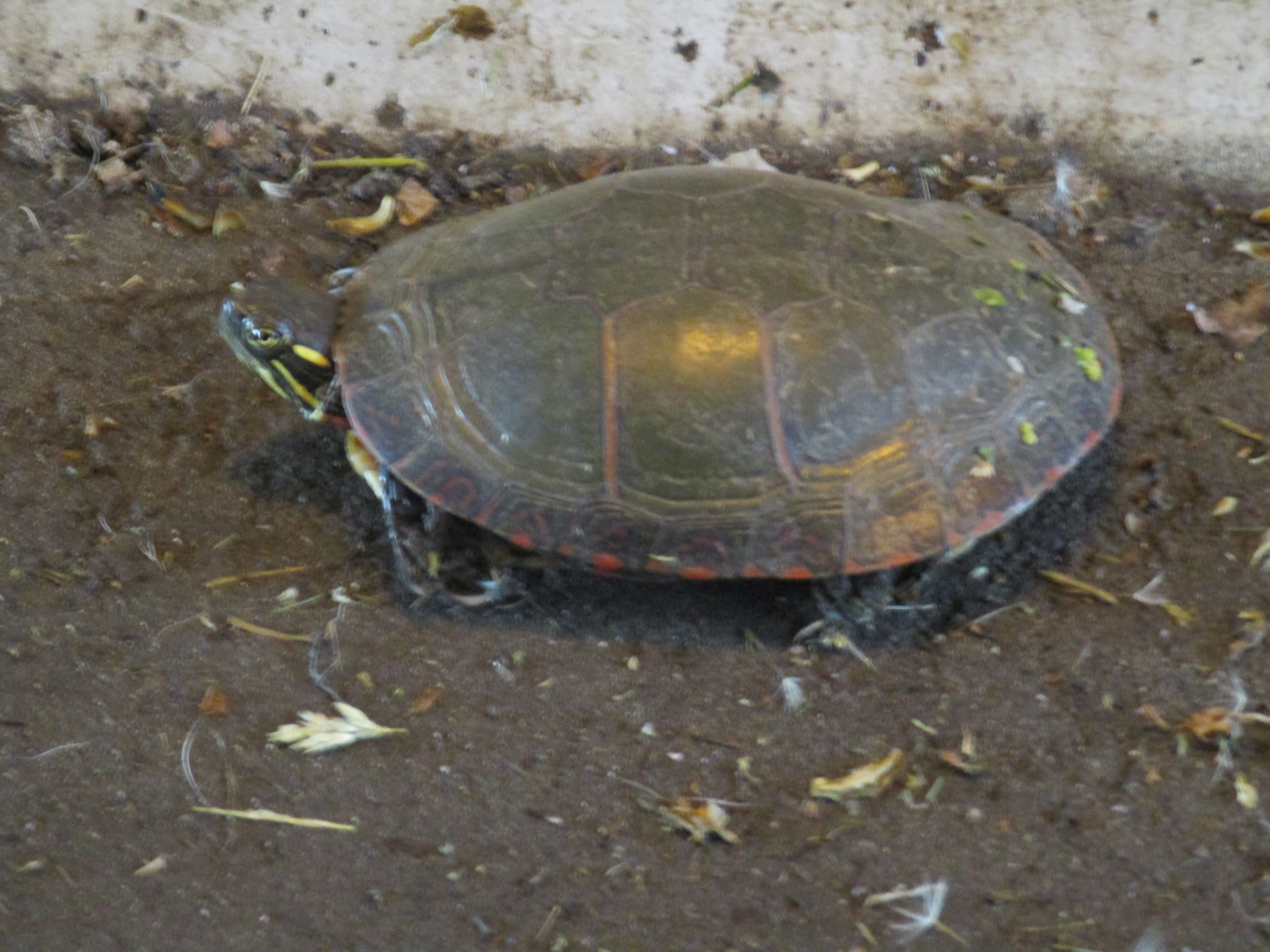 The trail leads into the conservation area through sections of planted pine forests growing in straight rows.  There are still large tracts of natural cover in the park making it the largest park in Brampton.  Over 8 kilometers of trails are marked out in the park, some for mixed use and some just for hiking.

Heart Lake was opened as a conservation area in 1957 with it’s kettle lake as a centre piece.  Swimming and fishing are allowed on the lake and a splash pad has been added.  Several thousand rainbow trout are stocked each year and the lake is also home to Largemouth Bass.  Worms are the only live bait allowed in an effort to protect against invading species. 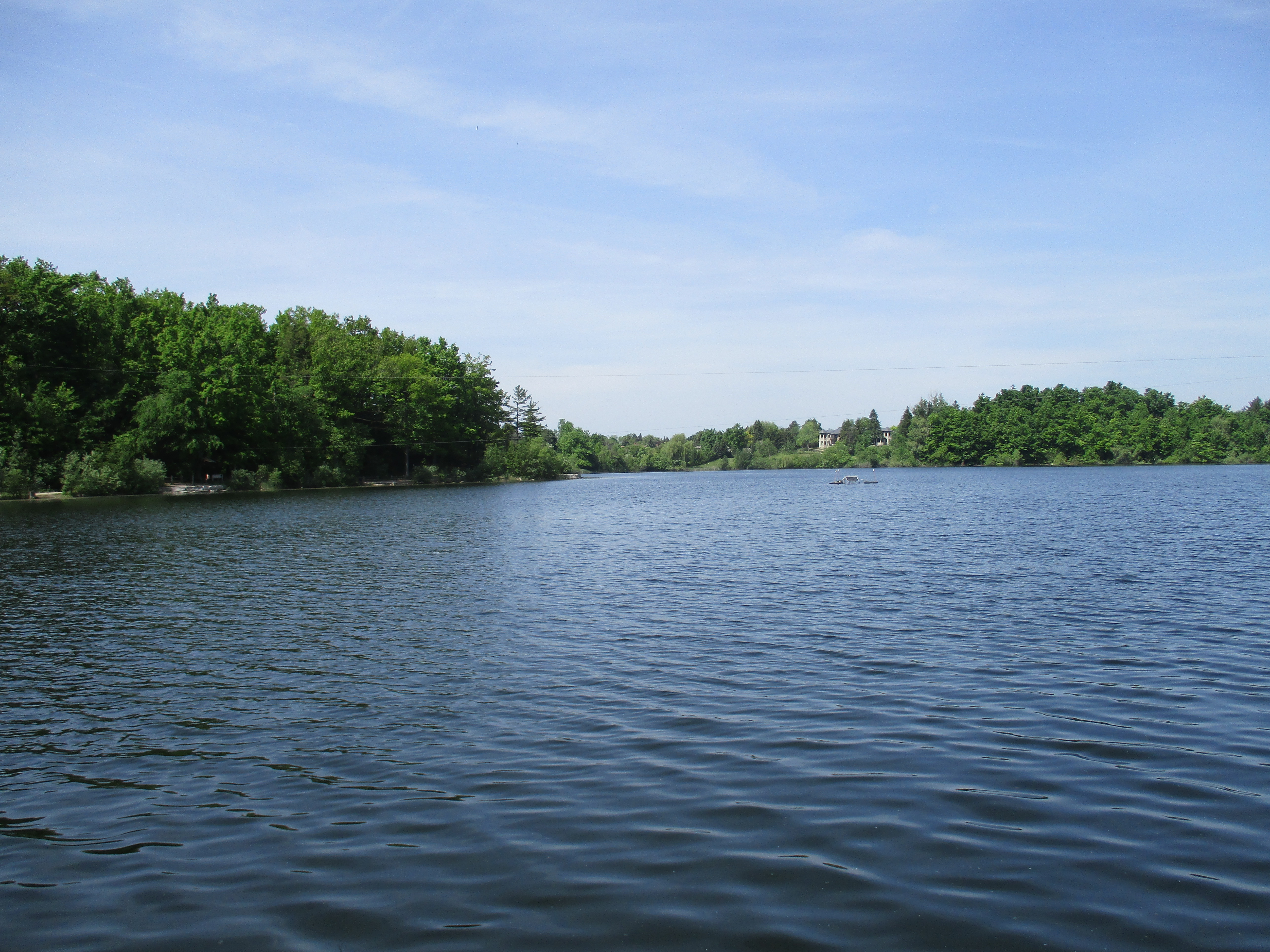 More recently they have added tree top trekking and zip lining to the list of activities.  The picture below shows the moment of truth for the zip line across the lake. 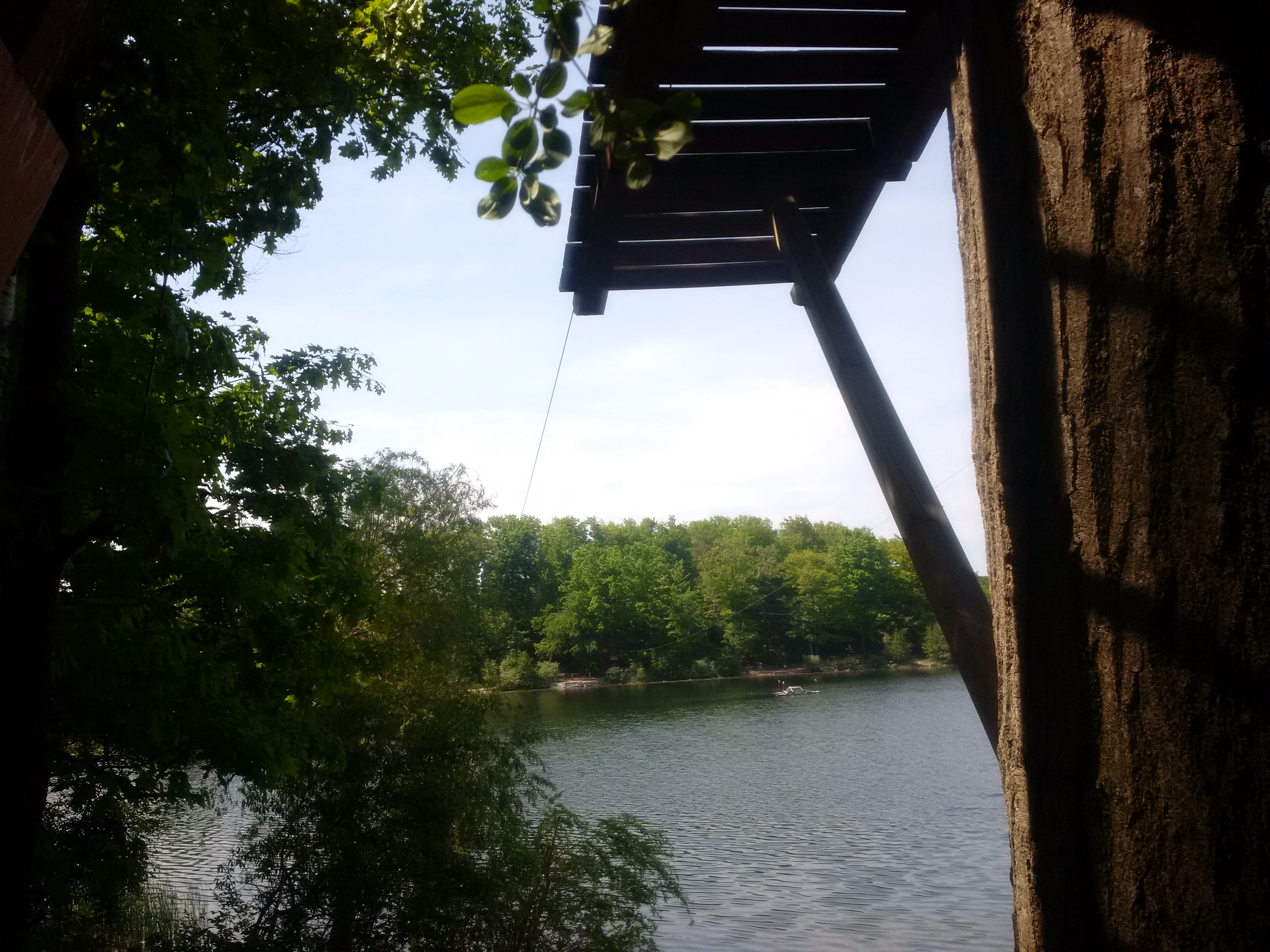 The scent of lilacs fills the air for a few weeks each spring.  They are a member of the olive family and are symbols of love in the language of flowers. 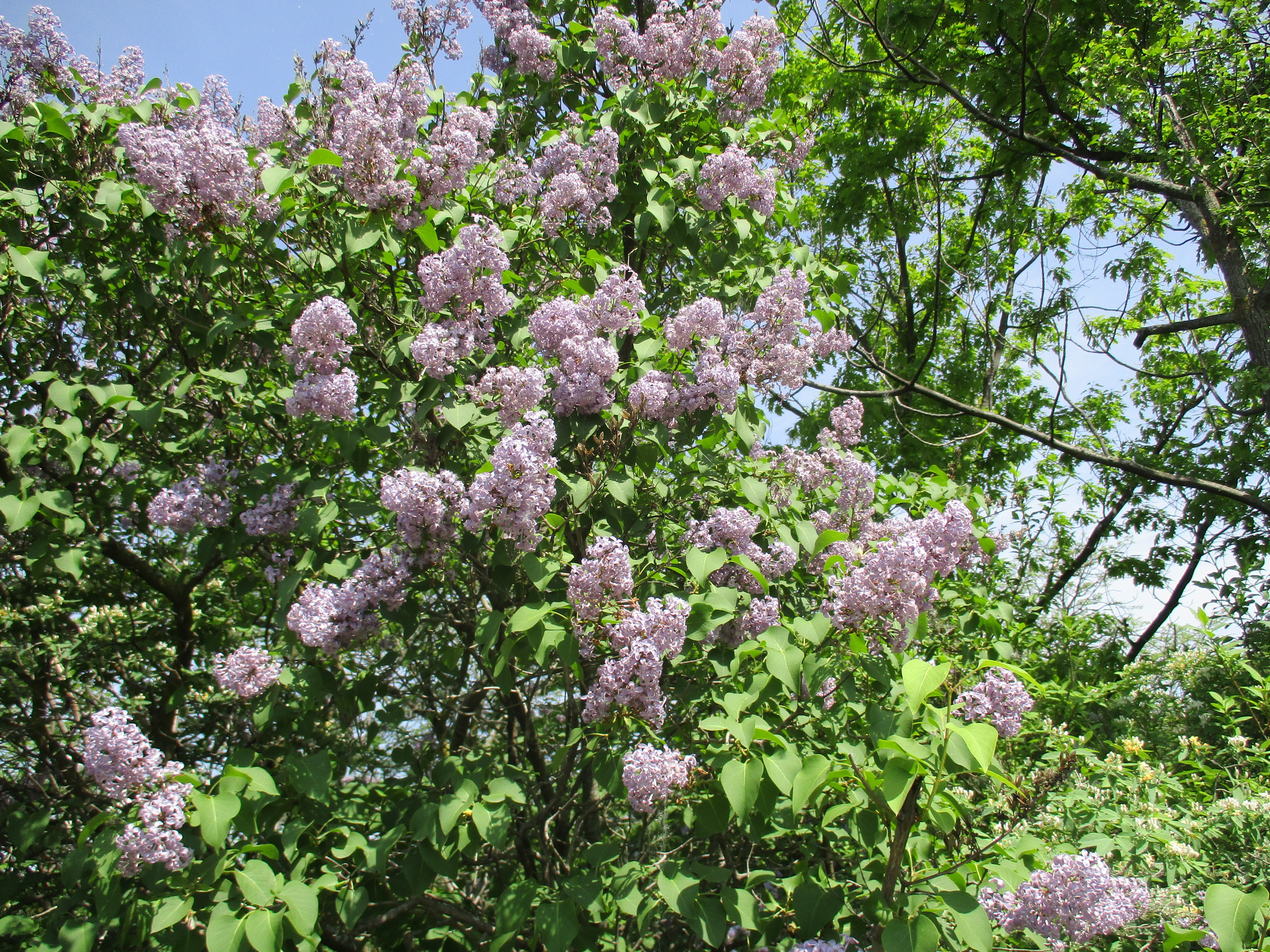 Teapot Lake is another example of a kettle lake but this one was formed by a long thin chunk of ice.  The lake is very deep compared to the surface area and so this is a meromictic lake.  Most lakes have the water stirred up once or twice per year when the water temperature at the surface cools down and the water becomes denser than the water at the bottom of the lake.  This keeps the water at the bottom oxygenated and allows for plant and marine life in the lower reaches of the lake.  These ordinary lakes are known as holomictic.  Teapot lake, at 12 meters, is deep enough that only the top layer mixes annually and the bottom layer remains undisturbed.  The lake drops off in a series of steep terraces that may indicate previous water levels within the lake.  While measuring water temperature and oxygen levels over an extended time period algae began to grow on the chain that held the sensor.  No algae grew below 3.75 meters deep and the lake is dead below this level.  The official plan for the lake is to not allow public usage so that it remains undisturbed.  Wetlands and environmentally sensitive areas surround the lake and all formal trails have been routed well away from it.

The lake is surrounded by a ring of trees that helps to shelter it and keep it’s record of the past intact.

Meromictic lakes slowly fill up with sediment and eventually disappear.  Teapot Lake has been collecting silt for a few thousand years and there are several meters in the bottom.  Core samples were taken to look for clues that might reveal the local history around the lake.  The lowest layers of silt, those deeper than about 4 meters, contain a lot of eastern hemlock and spruce pollen.  At a point roughly 5,400 years ago there is a sudden loss of all of this pollen from the sediment.  It is then replaced with beech pollen which is interesting because beech trees are a species that is early in the succession of reforestation.  This time period coincides with the hypsithermal period of global warming and may suggest that an insect outbreak destroyed the forest cover.  Emerald Ash Borer insects are currently visiting a similar destruction by killing 99.9 % of all the ash trees in the GTA.  For the period 500 to 1500 AD there is an increase in fine carbon in the sediment.  This can sometimes mean the presence of a community but there were no other indicators such as the presence of corn pollen.  Corn pollen had led to the discovery of a village of longhouses at Crawford Lake.  Several swamps provide wetland habitat but for some reason were empty of herons.

Canada Anemone grows in moist meadows and spreads quickly through underground rhizomes.  A rhizome is a stock or stem of a plant that can send out new roots and shoots from little nodes along it.  Canada Anemone was used by the native peoples as an astringent and to sterilize wounds.