The busiest highway in North America runs parallel to the shore of Lake Ontario and the strip in between is mostly developed through the entire GTA.  However, the lake shore itself is a small oasis that is too often broken by private property.  The Waterfront Trail stays off road as much as possible but usually has to take side streets to go around these little enclaves.  Ajax has a lengthy section of beach that can be followed, as I did from Duffins Marsh on Duffins Creek, Rotary Park, through Ajax Waterfront Park and beyond. To begin, I parked in Rotary Park off of Lake Driveway West.  The marsh was calm and several egret and a heron were seeking their breakfast along the water’s edge.  Where Duffins Creek empties into Lake Ontario a foot bridge carries the trail west toward Alex Robertson Park and Frenchman’s Bay.  The picture below shows Duffins Marsh just north of the lake.

I decided to follow the shore line east with the idea that I could return using the paved trail.  It wasn’t long before I attracted the attention of this Trumpeter Swan who swam along beside me for awhile before deciding that I hadn’t noticed it there, supposedly starving.  It came out of the water and started to follow me along the beach.  I noticed that it was tagged and numbered “T61”.  These swans were nearly extinct along the shores of Lake Ontario until about 30 years ago when they were reintroduced with eggs taken from other places in Canada.  The tagged birds are monitored for their movements based on where they are reported.  It also serves to indicate how many swans are being born in the wild as the percentage of tagged swans continues to decrease over the years.  Researchers are monitoring this closely and now estimate the local population in the GTHA to exceed 1000 birds.

There seems to be a lot of apple trees growing along the top of the embankment.  Slowly the ground is being washed away from under these trees and some are in danger of falling over the edge.  Then I came across an apple tree that was growing on the beach.  That seemed a little puzzling as to how it came to be there.  The most likely explanation for the tree on the beach is that an apple fell there and grew.  It’s surprising that it survived the waves that must have beaten upon it as it grew.

Like the Scarborough Bluffs, the sand along the shore of the lake is eroding away.  Large eratic boulders left behind during the last ice age are slowly being exposed and will eventually end up on the beach.  The rock in the picture below looks like it is about to fall but it is hard to tell how much of the stone may yet remain in the sand bank.

September 15th was the date for The Great Canadian Shoreline Cleanup.  The good people of Ajax were cleaning the shore as I made my way past.  This year there were 1714 different teams across Canada that cleaned 2,679 kilometres of shoreline and removed 58,226 kilograms of trash.  We salute all these people.

Zebra Mussels were first seen in North America in 1988 in Lake St. Clair.  The are believed to have come in the ballast water of a ship from Europe and have since spread into all of the Great Lakes, the St. Lawrence River and many smaller lakes.  One female Zebra Mussel can produce up to a million eggs per year and they can live up to five years.  They are spread from lake to lake on boats and trailers of people who don’t take the time to clean them off their equipment after a day in the water.  Their shells have washed ashore and in some places lay in drifts a foot deep.

There are several metres of sand bank along the shore in most places.  I found it interesting that the swallows seemed to place their nests in just the lighter layer of sand.  The nests are naturally not to close to the top or too close to the bottom so that they provide safety from predators. 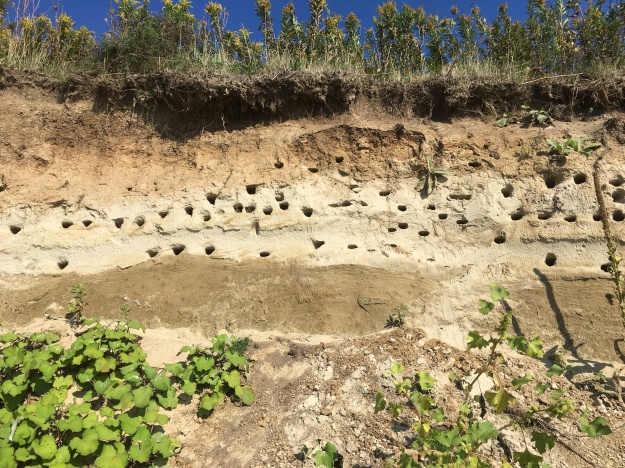 There is a great section of beach along here that hasn’t been artificially protected from erosion.  No armour stone and no break walls have been added to keep the waves from doing what comes naturally.  Some sections have shingle beach features with stone washed in from the lake or eroded out of the embankments along the shore.  Other sections have sand and could make suitable spots to spend an afternoon with the kids.

One rock on the shore was not like the others and appears to be rusting like a giant chunk of iron ore.  This single rock looks so out of place that it makes me wonder how it got there.  Was it ship’s ballast that was later dumped?  Ore headed for Hamilton for smelting, perhaps.  Or was it left there by ancient aliens as a clue that we’d been visited? 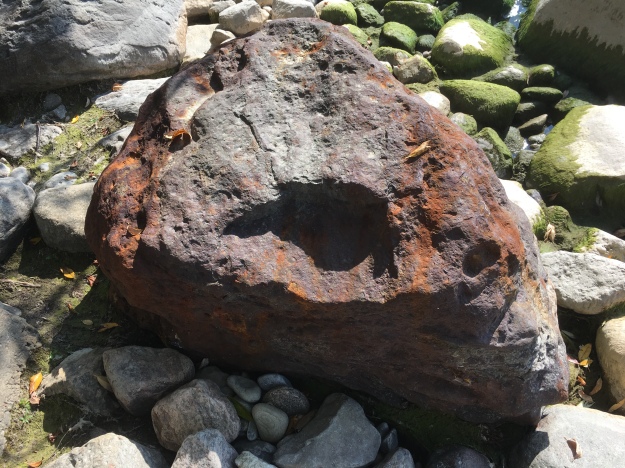 The shore line eventually came to a point of land that made access to the top of the embankment quite easy so it seemed like a good place to turn around.  Having walked the shore on the way east, I returned along the paved trail that follows the edge of the lake from a few metres above.  This path provides many great views out across the lake.

I hadn’t seen very many Monarch Butterflies but at one point I came across a patch of goldenrod that had several on it.  I snapped a few pictures and every one had at least two of the colourful insects in it.

Various pleasure craft were seen making their way up and down the lake.  Sometimes one or two larger tankers could be seen off in the distance against the skyline.  The boat in the picture below stopped and executed a turn in front of us as if someone was taking practice on doing so. 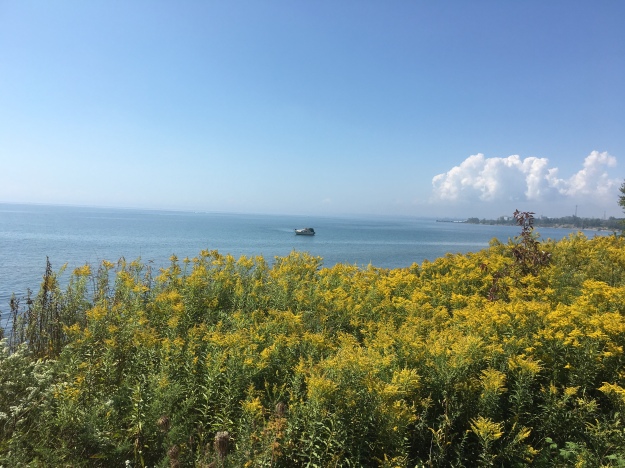 The tracker I use indicated that the total loop I made was about 7.4 kilometres.  It was a hot day and there was little shade anywhere along the trail.  I wish I had brought more cold water with me.

The Waterfront Trail continues in both directions from where I was today so it’s safe to say that there will be more trips to this area.