It was minus 6 feeling like minus 14.  Realizing that I hadn’t been hiking all year, I set out to fix that.  When we had investigated the Erindale Hydro Electric Dam in October we hadn’t looked for the power plant on the south end of town.  Parking in the first lot at Erindale Park we set off for the Credit River on the east side.

We crossed Dundas Street and entered a pathway down to the river from the east end of the bridge.  There we came across a large paper wasp nest.  Paper wasps build their nests out of chewed up plant fiber that they mix with saliva to make a paper-like substance.  They secrete a chemical onto the anchor stem of the nest so that ants don’t invade.  Gardeners consider paper wasps to be beneficial because they pollinate the plants as well as eat garden pests. 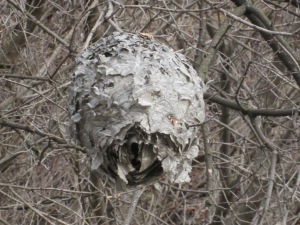 It may have been New Years Day but we didn’t see any people swimming in the river, doing their polar bear thing.  A pair of mallard ducks were swimming in the slushy river, feeding and enjoying the day.  Mallards form breeding pairs in the fall and perform courtship rites all winter. In the spring when the eggs are laid they separate.  The male takes no role in the raising of the ducklings but will hang out with the guys all summer.  In the fall a male duck’s fancies turn lightly to love and he leaves the boys in search of a mate.

As we made our way along the eastern river bank it started to look like we wouldn’t get around the curve in the river due to the shale banks along the side.  Going up and over wasn’t an option because in places the fence along the top was already falling down the embankment.   Water seeping out between the layers of shale has created icicles that reach down to the river in places. 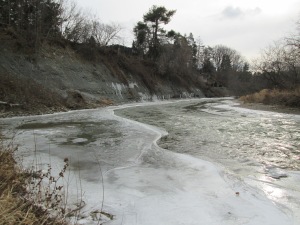 We were able to get out to where the ice had formed in the shale layers.  Where it flows out onto the thin river ice is currently impassible.  There is a possibility of making it around here in the summer when the water level is low. 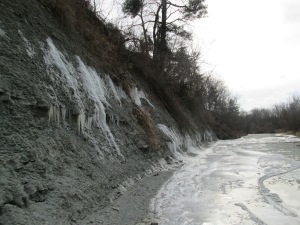 We decided to try to come at the old power station site from the top of the ravine.  We hoped to find access from one of the original Erindale side streets south of Dundas.  Turning north again we came to where Sawmill Valley Creek enters the Credit River just below Dundas Street.  It has been placed into a concrete channel with a series of concrete squares which help prevent the discharge from getting frozen by accelerating the water. 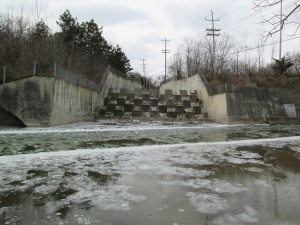 Dundas Street was surveyed in 1796 by Augustus Jones who also surveyed Yonge Street.  These two streets were built by the Queens Rangers under the direction of Lieutenant-Governor General Simcoe.  Roads were required for easy movement of troops should the defence of Fort York become necessary, as it did in 1812.  Dundas Street has had several bridges over the Credit from the earliest wood structures to the current 4 lane version.  The remnants of the foundations for earlier bridges can be seen below the modern one. 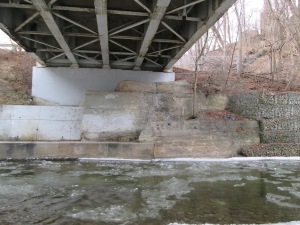 The picture below shows Erindale in 1910 looking west toward the river.  There is a vehicle just entering the bridge where the road hooks to the left.  Also featured in in this image are the stone flower mill, blacksmith shop, Barker’s Hotel with the large veranda and Caven’s store. The community hall is on the left.  All of these buildings were destroyed by fire in May 1919.

Passing under the bridge we made our way back to the old power dam that created Lake Erindale from 1910 until 1940.

Along the side of Dundas street stands the old head race for the power generating station. Water from Lake Erindale was diverted through a tunnel under Dundas Street to the power plant south of town.  A large intake structure allowed for the controlled flow of water from the lake.

We climbed the hill behind the intake and crossed Dundas Street.  Following Proudfoot Street we looked for a way to get down to the river.  Short of boldly walking across someone’s lawn there is no access anywhere along the ravine.  This older part of town contains many historical homes from the days of settlement in Erindale.  The 1855 log home on Jarvis Street wasn’t one of them though.  It was moved here in the 1970’s but is cool because of it’s collection of antique wheels and pumps that are displayed around the outside of the house.

Just east of the 1928 Community Hall is this old driving shed.  The cover photo is of this building with it’s horseshoe hanging upside down.  Horse shoes are considered lucky by some.  By hanging it with the open ends facing down it was supposed to pour the luck out over the doorway preventing evil from entering the building or home. 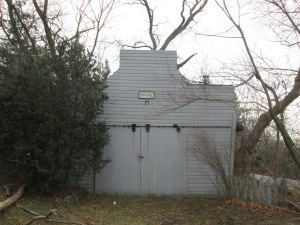 This tree has been confused by the weather and is thinking about blooming. 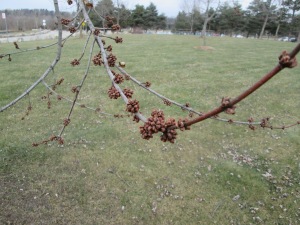 So, no luck on finding the tail race and foundations of the power plant today.  That will have to wait perhaps for a time when we can pass below the shale cliff on the side of the river.