This was the nicest day we’ve had so far this year for hiking.  It was sunny and 17 degrees C, warm enough to hike in a t-shirt but early enough in the season to be free from mosquitoes.  We parked in the lower parking lot beside the Old Mill bridge on the Humber river.  This magnificent stone bridge was built in 1916 as a replacement for the previous one which was washed out during the spring ice break-up that year.  In the photo below, from March 29, 1916, The Old Mill is abandoned and the earlier bridge is a twist of steel in the middle of the ice flow.

The mill in this photo was built in 1849 and destroyed by fire in 1881. It is actually the fourth mill on this site and is the foundation for the restored inn and restaurant that currently form a local tourist attraction.  The first mill was constructed in 1793 at the request of Governor Simcoe and was the first industrial site in Toronto.

As is our habit we decided to stay away from the paved path going north along the east side of the river.  At this time of the year the ground along the base of the hill is marshy and we had to keep going up to avoid getting wet feet.  We climbed about half way up the forested embankment and made our way along the side of the hill.  There is an animal trail here which includes prints from the local deer.

From our position part way up the hill, we were able to see old stone walls further up the hillside.  Climbing up, my brother found an old stairway and railing in hiding in the trees.  In places, the trees have grown around the old railings.  In others, the railings and stairs go down the hill and suddenly end where the slope increases dramatically. 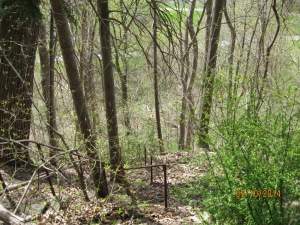 The tree has grown completely around the fence rail. 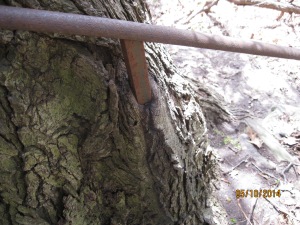 Old stairways in the woods always require investigation and this time it was well worth the climb.  We found a series of abandoned terraced gardens with at least 4 old ovens sitting at the top of the hill looking out over the old mill.  Some of these contain ornate stonework likely built with rock hauled up from the river below.

James Baby served in the war of 1812 and when his property was damaged, and he was taken as prisoner, he was awarded land in the area of York (Toronto).  In 1815 he acquired the point of land that overlooked the Humber River and the Kings Mill (The Old Mill).  The land had been a Seneca village and Baby used it to build his estate.  Baby and his family lived on there until 1910 when the government purchased the land with the idea of building a military fortress and barracks.  When this idea was abandoned the land was sold to a developer named Home Smith.  He developed an enclave for the rich and many of these homes had grand views over the ravine.

A set of stone pillars on Jane Street mark the entrance to this early version of a gated community.  Homes started developing the subdivision in 1912 and it is easy to envision Great Gatsby type of garden parties here in the 1920’s.

We found a lot of broken bottles on the hillside as well with dates on them from 1938 to 1947.  Two of the more interesting ones were a Lavoris Chemical Co. bottle which would have contained mouth wash and a City Dairy milk bottle.  City Dairy opened in 1900 and operated until 1930 when it was bought up by Borden’s Dairy.  It was famous for it’s safe drinking milk, which was preferred by the city’s doctors for their own use.  City Dairy was started by Walter Massey, who’s father ran Massey-Harris, because at the time Toronto’s milk wasn’t safe and it was estimated that 400 children a year died from drinking it.

It was a good day for enjoying the spring wild flowers.  Yellow, purple and white flowers carpet the woods.  This dog-toothed violet was one of the first to open itself to the morning sunshine.  A few days from now they will be out in the thousands.

It’s amazing to see how much the leaves have opened on the trees in just one week.

3 thoughts on “Ovens Above Old Mill”