It was partly sunny with humidity making it feel several degrees warmer than the 21 degrees on the thermometer.  We parked off of Nelson street and followed a little path to the edge of the creek.  From there we went south on the east side of Etobicoke Creek.  We very quickly saw two Great Blue Herons flying upstream followed shortly by a Belted Kingfisher.  A minute later one heron flew back downstream with the kingfisher scolding him all the way.  Having chased the heron out of his personal fishing hole, the kingfisher chattered final warnings as it flew back upstream.  Although we followed the heron downstream he was spooked enough that we never got a good picture of him.

Grass Spiders, also known as Funnel Weavers, weave a large web with a funnel shaped hole near one side where they sit and wait for prey.  The web isn’t sticky but the spider makes up for this with it’s lightning speed.  When I opened the back door of my car I found a large mess of spider web running from the door to the head rest on the back seat. One of these grass spiders, about an inch across, was trying to hide along the door seal. Living in my car and walking up my neck while I am driving is not an option but she jumped to the ground and ran away fast enough to avoid becoming a sticky mess on my shoe. 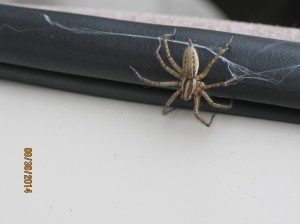 There is still plenty of evidence of last year’s July flooding along most of Toronto’s ravines. Rows of sticks and other debris has been packed into plants and trees high above the normal water level.  In one of these places we found an old tractor tire in which a grass spider has built it’s nest.  The round hole near the centre of the picture is opening of the funnel which is the spider’s home. 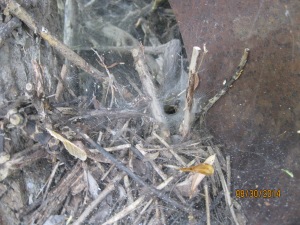 In the 1820’s John Silverthorn  built a saw mill and a grist mill north of Dundas Street on the Etobicoke Creek.  John also built a road through his property from Burnhamthorpe Road  to Dundas Street to help people bring their goods to his two mills.  This road still exists today as Mill Road north of the Etobicoke Creek.  South of the creek a clever city planner named it Southcreek Road.  The mill was at the crossing of the river but is now off limits to hikers as it is on property owned by the Markland Wood Golf Club.   A community grew up around the mills and by the 1850’s it had a population of around 100 with two blacksmiths, the grist and saw mills, a chair factory and, naturally, two taverns.  It took the name Summerville in 1851 when the post office opened.

John’s brother, Joseph, built Cherry Hill House in 1822 and it is said to be the oldest house in Mississauga.  As seen in the 1972 photo below, the house was allowed to fall into ruin. It was restored in 1979 and moved to it’s current location on the corner of Silvercreek Blvd and Lolita Gardens where it now serves as a restaurant. 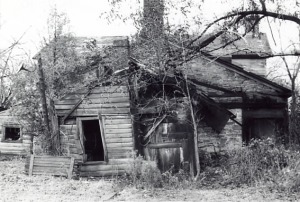 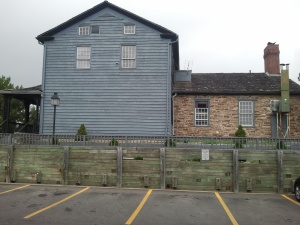 A Spud Bar is a cylindrical steel tool which is typically 5 to 6 feet long and weighs up to 15 lbs.  They usually have a chisel point on one end and a tamper two to three inches in diameter on the other end.  In north America they are also known as millwright bars reflecting one of their primary uses.  Early millwrights built water powered mills like the saw and grist mills of john Silverthorn.  The millwright bar in the picture below, and in the cover photo, was found quite close to the location of the Silverthorn mills. 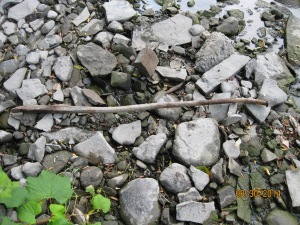 Not much to say here other than this is included as one of the strangest findings of all time. 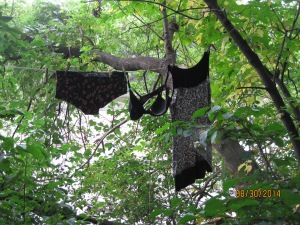 We could see a thunderstorm coming our way and we made it to the bridge on Dundas before it arrived.  The storm only lasted for a few minutes and the rain evaporated quickly, increasing the humidity and making the hiking a little stickier. 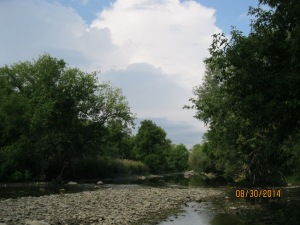 Along the side of the embankment was a long section of old bridge siding.  Hurricane Hazel took out over 50 bridges and it is quite likely that this is part of one of them. 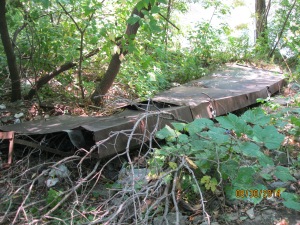 “A Mari Usque Ad Mare”, From Sea to Sea.  These words adorn the Canadian Coat of Arms. Just below the words Mari and Mare appear two purple thistles.  These are Canadian Thistles and have appeared on our Coat of Arms since 1921.  In-spite of the name, it is not actually native to Canada and is classified as a noxious weed here.  Other names include Lettuce From Hell and Cursed Thistle.  In spite of it’s status as an unwanted intruder it hangs on the walls of our government buildings, graces the 50 cent coin and shows up wherever the Coat of Arms is displayed. 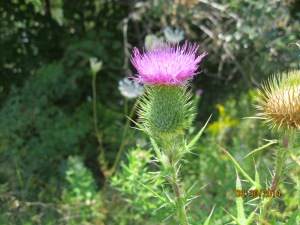 Apples, pears, cherries, peaches and roses are all related, being members of the “Rosa” family.  They all produce a type of fruit where the flower was.  The rose plant grows a fruit which is called a Rose Hip.  These are used for a wide variety of things including herbal teas, jams and jellies, pies and wine.  Rose hips contain 50% more vitamin C than oranges do and are one of the best natural sources.  They are also known to help prevent cancer and improve cardiovascular function.  Don’t just stop and smell the roses, take some time to eat them too! 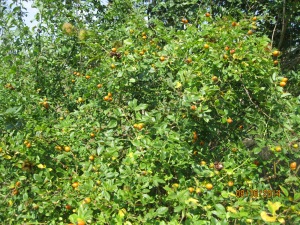 Barney and Friends debuted in April 1992.  The purple singing T-Rex was the star of 248 children’s tv shows until PBS cancelled the show on Sept. 18, 2009.  Listed by TV Guide as one the top 50 worst tv shows of all time it is rumored that no one has seen Barney since. Perhaps not until now…. 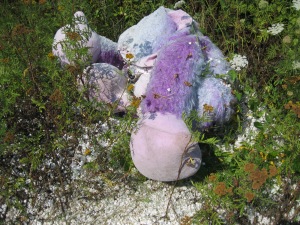