Overcast and 21 degrees but feeling more like 26 with the humidity.  We parked in the little parking lot on the east side of the Credit River just south of Eglinton Ave.

We encountered a patch of poison ivy that had started to turn red.  Poison Ivy is distinctive with it’s three leaf pattern on each stem.  It likes carbon dioxide and has doubled both it’s habitat and strength since the 1960’s.  Late in August the berries turn white as seen in the photo below.  The berries are eaten by birds and bears and are still viable after passing through them.  Some people can have a severe allergic reaction to poison ivy.

We saw a small Dekay’s Brown snake lying on a branch sunning itself.  They can grow to about 50 cm but the young, which are born in late summer, are 8-11 cm in length.  This snake is not poisonous but can emit a foul smelling musk if it feels threatened.

In 1843 the Barber Brothers, William and Robert, decided to expand their Georgetown mill operation by buying William Comfort’s farm and mill site just south of Streetsville.  In 1852 they built a 4 storey wollen mill.  When it burned in 1861 their workers just built a new one and opened again only three months later.  Within 10 years it was the fourth largest textile mill in Ontario.  During the first world war it was converted to a flour mill which it continues as today.  The second mill remains on the left in the photo below but has been covered over with stucco and aluminum siding.  The cover photo shows the mill as it looked in 1950.

Mills used to be built tall to take advantage of shafts and pulleys that were turned by the water wheel.  In this four story mill the wool was carded on the top floor then moved to the third floor where it was spun into yarn.  On the second floor it would be woven into blankets and assorted textiles.  On the first floor it was was cleaned, checked for quality and prepared for shipping.

Carding wool is a process which runs the wool through a carding material.  We get the word “carding” from the Latin word “carduus” which means teasel.  When the Barbers ran their mill, their workers would have used the heads of the teasel plant to draw out the fibres of the wool into long strands that could be spun.  Today carding is performed with a set of paddles with many closely spaced pins on them.  Teasel plants still grow around the mill property.  By mid summer the plant can be up to 2 meters tall with large purple heads on them.  The flower forms a purple ring that works its way down the the head as it blooms.  The ones pictured below have finished blooming. 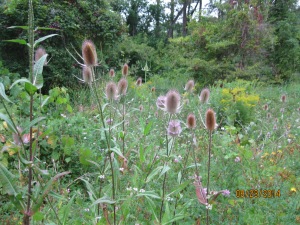 The Barbertown bridge was built in 1898 to carry workers from about 40 cottages that were built along Base Line (now Eglinton Road).  The staff of the mill reached 200 at one point and used this bridge to access the cottages on the other side of the river along Barbertown Road.  The bridge originally carried a roadway as wide as the cross beams on the bottom.  A narrower foot bridge has been installed for modern pedestrian traffic.

A sluice gate is used to control the flow of water at a mill site.  By raising and lowering the gate a mill could control the speed of the water wheel.  At Barbertown the sluice gate was raised and lowered by a hand crank that would have been operated by two people. When water power was finally abandoned here in 1974 the sluice was filled in. Today a tree grows where a deep ditch full of water once ran.  The tree has grown almost completely around the steel rod as if to still the works of man even further. 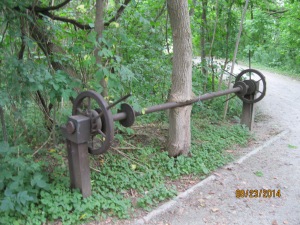 The Barber dam was washed out in 1974 and never replaced. 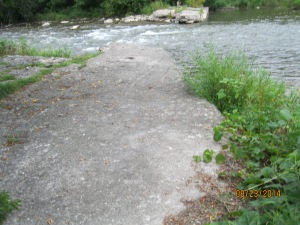 William Barber built himself a two story house in 1862 on the corner of Barbertown Road and Mississauga Road.  It survives today as a restaurant. An 1860’s carriage parked near the front of the house reminds us of how these roads and the Barbertown Bridge were originally used.  I can picture William coming out in the morning and getting onto perhaps this very carriage.  After an inspection of the mill, perhaps a trip down Mississauga Road into Port Credit to arrange the sale or shipment of some of his textiles.

Rail corridors were strung with telegraph wires allowing transmission of information about train positions.  When electrical power was spreading in the early 1900’s the utility poles were converted to carry power as well.  Glass insulators were patented in the 1880’s and were used where each wire was attached to the pole.  In the picture below many of the original ones have been broken off but several good examples remain.  The light blue ones are possibly older than the clear glass style but to know for sure a date is usually embossed on the right side of the molder’s logo. 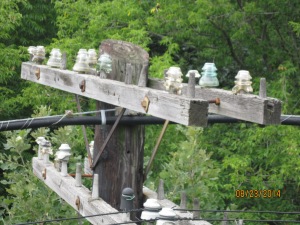 We disturbed a Red-Tailed Hawk who was having a little snack.  Although they eat mainly rodents they are not opposed to a little water fowl once in while as this one was enjoying. Females are up to 25% larger than males and this was therefore likely a female.

11 thoughts on “Barbertown – Ghost Towns of the GTA”