For over 100 years a steam powered aerial tramway has been hidden away in the Caledon hills. It was 8 degrees when we set out and it started lightly raining almost as soon as we found the west end of the tramway.  Having parked on The Forks Road near Dominion Street we walked up the hill to the hairpin turn.  This is where the Credit Valley Railroad (CVR) built their station.  The CVR was absorbed into the Canadian Pacific Railroad (CPR) who took over transportation for the mineral extraction activities in the area.  The embankment on the side of the railway has been reinforced by driving steel rails into the ground to support boards.

The medina sandstone in the Caledon hills had not been exploited with much success until the coming of the CVR.  McLaren’s Castle was built in 1864 and is a rare example of local stone prior to the arrival of the railway in 1879.  For the next thirty years quarries mined all the easily accessed deposits until one by one they were closed.  In 1900 an aerial tramway was built to bring stone from the eastern embankment of the Credit River to the railway line.  This avoided bringing it down to Dominion Street and then back up the hill on the Forks of the Credit Road. McLaren’s castle is shown in the archive photo below but it was destroyed in a series of fires in the 1960’s. 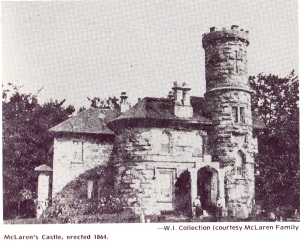 The Cox Property is the east half of lot 9 concession 4 while the west half of lot 9 is the Willoughby Property which features the Stonecutter’s Dam.  Both properties are owned by the Credit Valley Conservation Authority.  The CVC has taken a “hands off” approach to managing the Cox property.  No formal trails have been established and the area is being allowed to return to it’s naturally vegetated condition.  Almost immediately we found an area of disturbed rocks where steel rails could be seen underneath.  After a brief investigation we located the two inch steel cable from the tramway running through a chamber below ground.

A little farther along several steel railway rails have been exposed.  These rails support chunks of stone that hide the chamber below where the cable runs.  Inside, the curving end of the tramway cable can be seen.

I climbed into the chamber that the cable ran through.  After cleaning a bit of debris away I still couldn’t see where the cable went as it curved around a large block of cut stone and down deeper into the underground chamber.  Without preparations, or permission, it wasn’t possible to dig all the stone fill out of the chamber and discover if the cable turns on a hidden drive below.  The cover photo shows the cable from inside the chamber looking to the east where it entered this end of it’s route.  The walls are lined with cut stone and the roof is supported on a series of steel rails.  Above ground the rails are covered with a layer of stone that has been spread over the top.

The steel wire rope used on the tramway had a two inch diameter as can be seen relative to the 28mm (1.1 inch) coin in the picture below.  The rope appears to have a 6 X 7 construction which means that it has 6 strands made of 7 wires each.  The six strands are wrapped around a central core. Without seeing a cross section it isn’t possible to determine of there is a 7th strand in the core making it a 7 X 7 rope.  Using 7 wires per strand allows for larger outer wire diameter which greatly improves abrasion resistance but reduces flexibility.  The wires in the strands of this rope run in the same direction as the stands and this is known as a “lang lay”. Depending on the exact construction this wire rope should have a breaking strength somewhere between 175 and 200 tons.

Other evidence of past industrial use of the land is seen in the remains of a steel ladder. 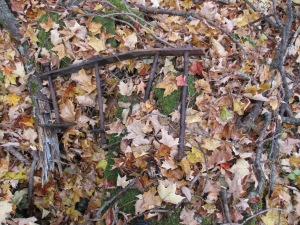 There is a small patch of horsetail growing on the side of the hill and most of it has been chewed off.  White tail deer will sometimes eat horsetail and we saw the departing end of a deer as we came through this part of the woods. 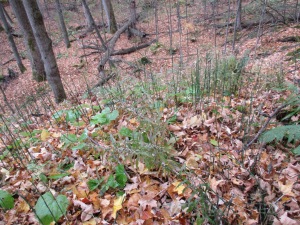 Stone was brought from the quarry on the other end of the tramway and unloaded to waiting train cars on the CPR.  A large steel spike is seen protruding out of the side of the hill near where the tramway ended. This spike is similar to the ones I saw on the 1855 Gore and Vaughn Plank Road I reported in Dufferin Creek.

Turkey tail fungus is known by the scientific name Trametes Versicolor and it grows on fallen hardwood and stumps.  This fungus contains a protein called PSK which has been shown to have anti-cancer properties.  It inhibits growth of breast and lung cancers as well various ones in the digestive system.  Treatment with turkey tail proteins has shown very little negative side effects.

The eastern end of the tramway was at a much higher elevation than the western end and I could see that cable making an excellent zip-line across the Credit River valley.  This picture looks from near the terminus on the Cox Property across the valley to where the steam boiler that powered it hides at the other end.

The Caledon aerial tramway has given up some of the secrets it guarded for the past century but I suspect that there is even more buried in that underground chamber.  The Cox property also contains a couple more quarries and access roads but after a couple of hours of non-stop rain, we decided to call it a day, leaving the rest for another time.

Please note that the Credit Valley Conservation considers this property to be private and as noted above, no trails are maintained on it.  Access to the property is by permission only.

5 thoughts on “The Caledon Aerial Tramway – The Cox Property”