The Spencer Creek reach between Bullock’s Corners and Crooks’ Hollow is one of the best dammed stretches of water we have investigated so far.  Beginning with the old dam foundations of William Bullock’s grist and saw mills and continuing upstream to the Christie Dam we found the remains of at least ten of these old structures.  One might expect that the earliest industrial park in Upper Canada would be in York (Toronto), Bytown (Ottawa) or Kingston (first capital of the Province of Canada, 1841) but it was in fact at Crooks’ Hollow near Hamilton.  We started our hike in Bullock’s Corners where at this time of year about the only place you can park is at the park on Park Street.

Bullock’s Corners centres around the site of a large grist and saw mill built in 1841 by William Bullock.  The mills continued to operate until 1866 when they were converted to a blanket factory.  A three story stone building was erected after the original one was destroyed by fire and it continued under various owners until damaged by a flood in 1938. The remnants of the dam mark the site.  Adjacent to it was the mercantile block William built in the 1840’s.  It consisted of general, flour and feed stores as well as shoe and harness maker’s shops with some apartments above.  The foundations of a former storage shed are shown below.

John Green Came to Spencer Creek in 1797 and built a mill, establishing the town name for Greensville.  Bullock’s Corners and Greensville are separated by Spencer Creek and in the early days by language as well.  Bullock’s Corners was home to the mill owners and was an English speaking town.  Greensville was home to many of the mill workers who spoke predominantly French.  Green’s mills were later sold to Andrew Todd Kirby. Although Crooks’ Hollow originally only encompassed the small area around James Crooks’ mills upstream, the term has now been applied to all the industrial operations as far down stream as the Kirby dam.  The picture below shows a more recent Kirby dam, made of concrete, with square stop logs still in the creek bed.

In addition to about 2200 dams in Ontario there are the remains of countless former dams. Along Spencer Creek you can find the remains of several construction methods that were employed over the years.  The earliest dams were made of wood cribs filled with rubble. Due to the high maintenance requirements, and the dangers presented by them, these were often replaced with large field stone dams.  After 1900 concrete became the standard for dam construction.  The Cockburn Property was taken over by the town of Dundas in 1909 and contains the remains of the old stone dam from his sawmill.  Along this stretch are the more complete remains of another modern concrete dam and mill.  This dam includes the mill foundations in the foreground, just behind that is the rectangular turbine housing and then the slope of the spillway.  The earthen berm on the far bank of the creek once extended to the side of the spillway. 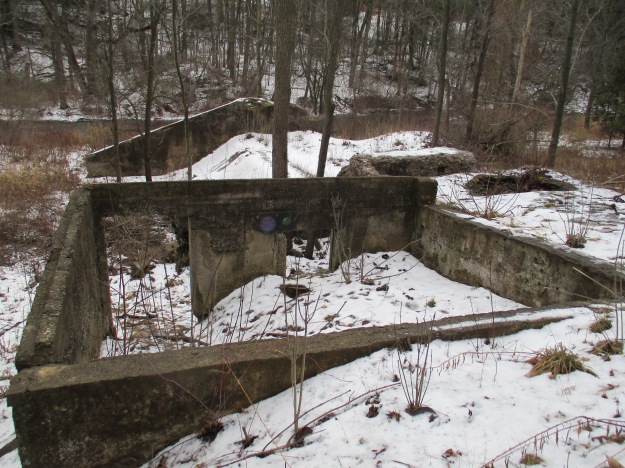 The Crooks’ Hollow Dam was built in 1913 to create a reservoir for the provision of water to the town of Dundas.  It was 5 metres tall and 30 metres wide with 4 spillways consisting of three overflow weirs and one stop log bay.  The picture below from wikipedia shows the dam in 2010 when all four spillways were in action.  The dam was assessed for safety concerns in 2007 and it was determined that the concrete had deteriorated to the point where it was becoming a potential danger during times of high flooding.  Even the concrete repairs that can be seen on the first spillway below were determined to be unsafe.

It was decided that the dam needed too many repairs to be practical and it was recommended that it be removed.  Restoring the creek to it’s former level would provide additional benefits in water quality and wildlife habitats.  The dam was demolished in 2013 and the remaining abutments were turned into viewing platforms.

Water was drawn from the bottom of Crook’s Hollow reservoir and taken by pipe to the town of Dundas to provide for the needs of the community.  After town water became available in Dundas the reservoir was used by a golf course for irrigation purposes.  The cast iron pipe that once carried drinking water still runs along the side of Spencer Creek. It is now broken in several places and trees are growing on top of it.  The picture below was taken near the Kirby Dam and there is a small waterfall known as the Greensville cascade which descends the hillside in this same location.

Just upstream from the Crooks’ Hollow dam are the remains of a much earlier stone dam known as the Morden Dam.  This little cascade waterfall was hidden for 100 years below the Crooks’ Hollow reservoir but is revealed now that the dam is gone.

James Crooks was born in Scotland in 1778 and came to Upper Canada when he was 13. He served in the war of 1812 where he fought in the Battle of Queenston Heights in which General Issac Brock perished.  In 1814 he moved to a 400 acre lot on Spencer Creek which he had purchased in 1811.  Here he set up the first major industrial complex in Upper Canada.  His milling empire consisted of a grist mill, a tannery, distillery and a linseed oil company.  In 1826 the British Government imposed a heavy tariff on paper imported from the United States.  A 500 pound reward was offered for the first successful paper mill in the colony. With the help of the Barber family James Crooks won that prize for the paper mill he built just downstream from the grist mill.  The Barbers later moved to Georgetown and built the Barber Paper Mills and the Barber Dynamo.  The map below shows Crooks’ Hollow as it existed in the late 1820’s.

The Darnley Grist mill was completed in 1813 by Crooks and was named after Lord Darnley of Scotland who was a famous ancestor of Crooks.  The mill was made of stone quarried downstream near Morden’s mill.  It originally had a 9 metre overshot waterwheel that supplied power to the four run of stones inside.  It’s first mission was providing flour for the British army during the war of 1812.  In 1860 when Crooks died the mill was sold and converted into another paper mill.  In the 1930’s the Greensville Paper Company replaced the wood floors with poured concrete.  The mill was later abandoned in 1943 after it was destroyed by a fire.  The picture below shows a couple of remaining window frames inside the mill.  The cover photo also features an internal view of the old paper mill.

The Darnley Cascade is a 4 metre high waterfall just upstream from the mill site.

The Christie Conservation Area Dam is 180 metres long and was completed in October 1971.  It features two sluice gates and 8 spillways that flood an area the size of 900 Olympic size swimming pools.  It is designed to provide flood control for areas downstream including Webster’s Falls and the town of Dundas.  This picture is taken from the top of the Christie dam looking down on Spencer Creek, which is full of ducks.  The picture also shows the steel structure from a previous dam.

There are several dams and lots of foundations that space didn’t allow us to present here but which are worth the exploration as well.