Glacial Lake Iroquois covered downtown Toronto with about 60 metres of water which would have covered all but the dome of the Rogers Centre and left it sticking out of the lake some four kilometres from the shore.  The lake had been left behind when the last great North American glacier retreated.  Lake Iroquois cut a prominent bluff along it’s shore which can still be traced through the area today.  The lake suddenly drained through the Hudson River about 12, 200 years ago when the weight of ice in northern Ontario and Quebec caused the crust to tilt.  The lake drained to a much smaller size called Lake Admiralty whose shore line was about 5 kilometres south of Toronto in an area known locally as the Toronto Scarps.  Since then water levels have been rising due to post glacial rebound as the tilt is slowly reversed. The former shoreline of lake Iroquois has become an escarpment known as the Iroquois Shoreline.  Casa Loma overlooks the city from the top of this escarpment.  The Scarborough Bluffs are also part of the ancient Lake Iroquois shoreline.  A 1912 picture of the bluffs from the Toronto archives is presented below.

The Scarborough Bluffs had been eroding at a pace of a metre per year until recent erosion controls have slowed the pace.  The sand that has been falling into Lake Ontario is carried by the westward rotation of the lake and deposited near the harbour in Toronto. Over the centuries this deposit has formed Toronto Islands.  When Elizabeth Simcoe came with her husband to found the town of York (Toronto) in 1793 she took an active interest in the land around her.  Her journal provides key insights into the founding of the town and pioneer life in it.  She hiked up and down the Don River as well as around the islands.  She fell in love with an area east of the city that reminded her of home.  Along with her husband, Lieutenant Governor John Graves Simcoe, she contemplated building a summer home on top of the bluffs and calling it Scarborough.  From this we get the name of the township and the city that grew there.  The picture below shows some of the bluffs in Bluffer’s Park where I parked.  Brimley Avenue is one of the few places where one can drive down the bluffs to the beach level.

The cliffs at Scarborough, North Yorkshire in England are made of limestone and not sand like the ones near York.  However, the local ones reminded Elizabeth of the cliffs near her home and so she named them the Scarborough Bluffs.  The picture below is taken from worldtravelguide.net and shows the remains of the 12th century Scarborough Castle on top of the cliffs in England.  These cliffs have changed relatively little since Elizabeth viewed them in the 1790’s.

The sand formation of the Scarborough Bluffs occurred when the area was the bottom of a large river delta.  The first 46 metres (150 feet) contain the fossils of plants and animals while the upper 51 metres (200 feet) is a mix of boulder clay and sand that was left during the retreat of the last ice age.  The Rogers Centre would rise to about the same height as the bluffs if it was built beside them.  The bluffs run for a distance of about 15 kilometres east from Victoria Park Avenue to the mouth of Highland Creek.

A thousand years ago the bluffs were a full kilometre farther out into the lake.  In the 1950’s and 1960’s it was fashionable to build homes on top of the bluffs overlooking the lake.  This destabilized the sand below and sped up erosion.  Many of these cottages have already had the ground disappear from below them.  To slow erosion the city has built hard shorelines with large chunks of rock along portions of the bluffs.  Even with these controls in place the piles of sand are under constant attack from wind, rain and ice.  The various shapes of sand that are pictured here will certainly be different a year from now.  The picture below shows the cracks that appear in the sand and where new sections can collapse at any time. 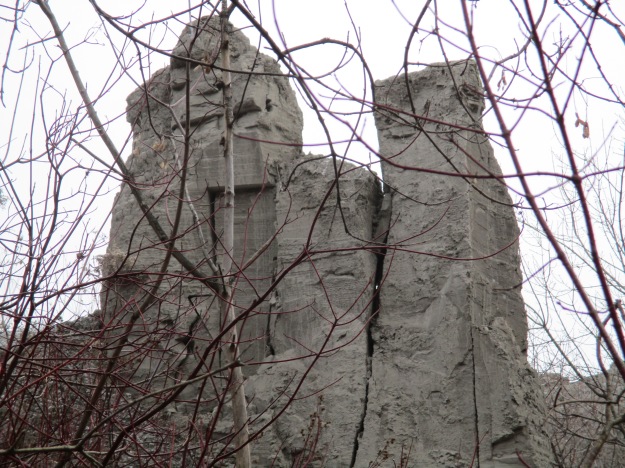 A storm was brewing out over the lake but it was a nice enough day along the bluffs and several people were here taking pictures.  Some were climbing the bluffs which speeds up erosion and ends up with an ever growing list of people who get trapped and need to be rescued.  If this happens to you, expect to get an expensive bill in the mail.

This part of the bluffs has eroded with an open core down the middle.

I walked along the edge of the bluffs where the sand has collapsed into fresh piles of talus. Some appeared to have come down since the last good rain.  They say that if you listen closely to the bluffs you can hear the sand shifting inside.  Looking down the bluff face there is a large corrugated storm pipe sticking out.  This is set in a ravine that can’t be seen from this angle but the length of pipe sticking out is an indication of the amount of erosion that has taken place since it was laid.  The pipe itself has corroded and icicles hang from a large hole about 2 metres from the end.

Bluffer’s Park, including the upper meadow, is a great place for bird watching.  In season the meadow is also home to many species of butterflies.  The cardinal in the picture below provided a bright red splash of colour in the trees near the ponds.

Storm water collects on all the paved surfaces in the city and runs along roadways picking up contaminants. These are carried into the storm drains and eventually out into the the lake. Toronto has implemented a Dunker’s Flow system in Bluffer’s Park. The picture below shows where the storm water is released at the bottom of the bluffs after being collected up top.

Karl Dunkers, of Sweden, invented a system for storm water purification.  Storm water is released into the first of five cells where it begins to have impurities filtered out.  The picture below shows the settling ponds and the walkways in between some of them.  Each walkway has a screen suspended below it that causes solids to drop out of the water before it passes into the next cell.  The final cell is a naturalized wetland where marsh grasses provide a living filter before the water enters the lake.  When the sediment in the filtration cells reaches a certain level it is removed. 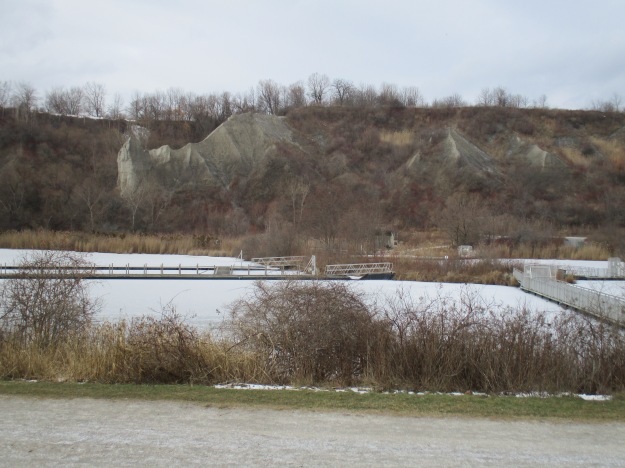 Two small peninsulas have been created to provide protection for the bluffs and to give vantage points for people to enjoy the view.  This picture is taken from the closer of the two.

One of the unique features of the Bluffer’s Park facilities is the shape of the buildings themselves.  Built in 1973 they fit in nicely with the shapes of the eroding bluffs behind them.