The Humber Recreational Trail is pretty much continuous through Toronto from Lake Ontario to Steeles Avenue.  It has a short section on the road where a golf course restricts passing.  We chose to explore a section north of the 401 so we could look for the remains of Old Albion Road.  Free parking is available at Pine Point Park at the end of Hadrian Drive.

Staying close to the river, we were treated to several Mergansers who were playing in the slushy waters.  The males were attempting to impress a group of seemingly bored females.  In breeding season the male Merganser gets a glossy green tinge.  Later in the summer and fall both he and the females will be mostly a dull grey.  The diet is mostly fish and so their bills have serrations to help with holding onto their slippery prey.  For this reason they are also sometimes known as “sawbills”. 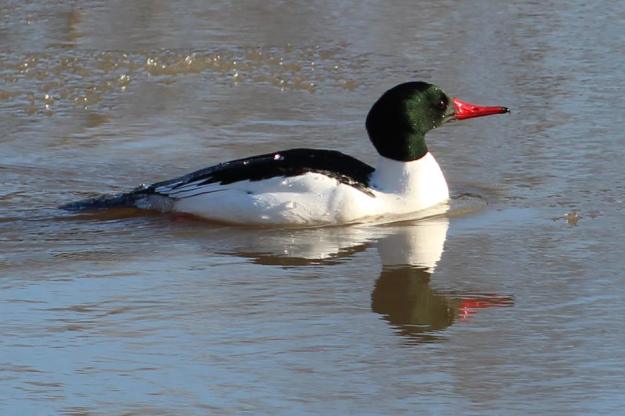 Male whitetail deer rapidly grow their antlers for three or four months during the summer when their testosterone levels are high.  Following the rutting season the testosterone levels drop quickly which activates specialized cells called osteoclasts at the point of connection of the antlers.  These cells eat away at the pedicle, where the antlers grow, until the connection becomes so weak the antlers are simply shed to make way for new ones.  Depending on the age and health of the animal as well as their local climate they shed their antlers between January and April.  This young buck has clearly visible pedicles, just waiting for new antlers to begin to grow.

Albion Road was originally a private road built for a French teacher named Jean du Petit Pont de la Haye and ran to his estate at Indian Line and Steeles Avenue.  The settlement he founded there was named Claireville after his daughter Claire.    In 1846 the road was upgraded from Musson’s Bridge at the Humber River all the way to Bolton by The Weston Plank Road Company.  At this time the road was named Claireville Road and there was a toll booth in Claireville to help pay for maintenance of the road.  It is believed that the white house that can be seen from Steeles Avenue is the old toll house.  Claireville Road is coloured brown in the 1877 County Atlas image below.

Early bridges were built of wood and seldom lasted more than 20 years.  Flooding would often destroy them even earlier than that.  By the time of the County Atlas, Claireville Road was likely on its second bridge across the Humber.  In 1905 the bridge was again in need of replacement and Octavius Laing Hicks was commissioned to build the new one.  The bridge was his first and also the first all-riveted steel bridge to have a permanent deck.  Hicks built it on cut stone abutments instead of concrete that had started to become popular in construction at the time.  As his next bridge was a concrete bow bridge it is clear that Octavius was familiar with concrete as a bridge building material.  This suggests that he built his bridge on the abutments from the previous one.  The bridge became known as Musson’s Bridge because the family owned several pieces of property on the Etobicoke side of the river.

When the remnants of Hurricane Hazel swept down on the city on October 15, 1954 they destroyed or severely damaged 40 bridges.  Musson’s bridge had already been replaced with the new alignment of Albion Road and was no longer as critical to transportation as it had once been.  The bridge wasn’t badly damaged and remained on site until it was removed in 1962.

The bridge abutments on the west side of the river were removed in 1963 but the ones on the east side remain, and we can see them but for the moment there’s still an icy river between us.

We followed the edge of the Humber Valley Golf Course until the river doubled back on itself leaving us to also turn back.  Just as we were about to do so, we caught sight of a coyote who saw us at about the same time.  Unfortunately, he didn’t hang around to get his picture taken.  Soon, movement in the trees across the river alerted us to the presence of at least two more deer.  These two were likely females who will be giving birth to their fawns in late Spring.  The deer were keeping the swiftly flowing river between them and the coyote. 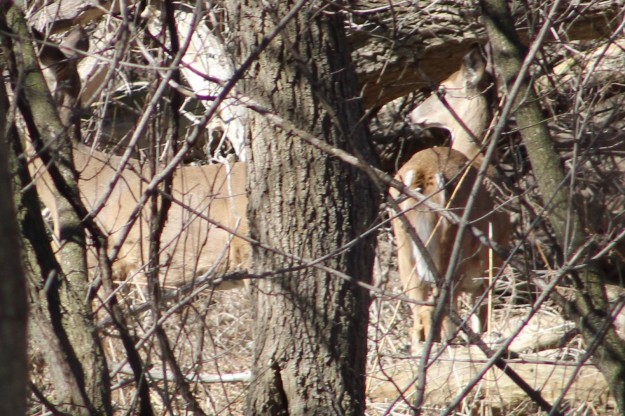 We retraced our steps to a pedestrian bridge we had seen earlier in Louise Russo Park and made our way back to the abutment on the east side of the river.  The steel beam is still in place that anchored the bridge to the abutment, however it may have been added by Octavius in place of a previous wooden span.

One thing that never changes is human interest in seeing the damage that storms can cause.  Ice, wind or water can all inflict a lot of damage and this 1954 picture from the Toronto Public Library shows us the curious ones out to see the damage from the hurricane.  This view is from the east side looking toward Musson’s bridge and the river. 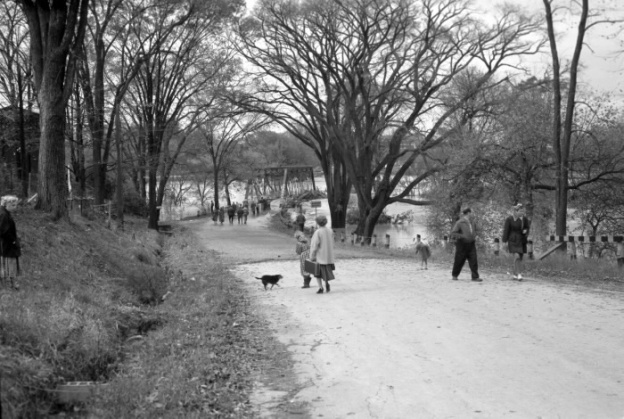 The street view today is much different with the road closed off and the bridge missing.  The embankment on the left of the picture has grown over with trees and there is a park on the right side.  The road crossed the river and then angled north-west  right where the apartment is today.  The small section of Albion Road that ran between Weston Road and the river still provides access to a few houses under the name Norris Place. 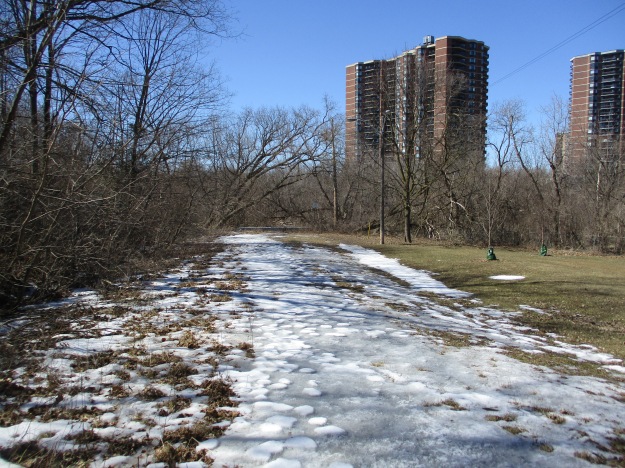 It was nice to see so many birds this weekend along with the other wildlife.  It’s a certain sign of warmer days ahead.