This week I bought the Bruce Trail App for my phone and so it got it’s first workout.  After identifying a section we hadn’t been on before we set out for the parking area on the map (8th line north of 22 Side road, north of Georgetown).  There are several places that you can pull off and park that are not on the map including where the main trail crosses the road a little farther north.  With the tracking feature turned on it marked our trail as we progressed and created a record of the hike that can be saved toward earning trail badges.

We entered on the Eight Line Side Trail and made our way to The Great Esker Side Trail.  Along the way we identified the remains of an old car in the woods.  It has clearly been there for decades as it has no motor and is surrounded by mature trees. It is in a very advanced state of decay.  The front bumpers and grill pattern were quite unique in the various car models of the 1940’s.  Having looked through hundreds of online picyures, positive identification wasn’t possible but the closest candidate was a 1946 Chevy Stylemaster.  That particular car was a sedan and this model was most likely a truck. 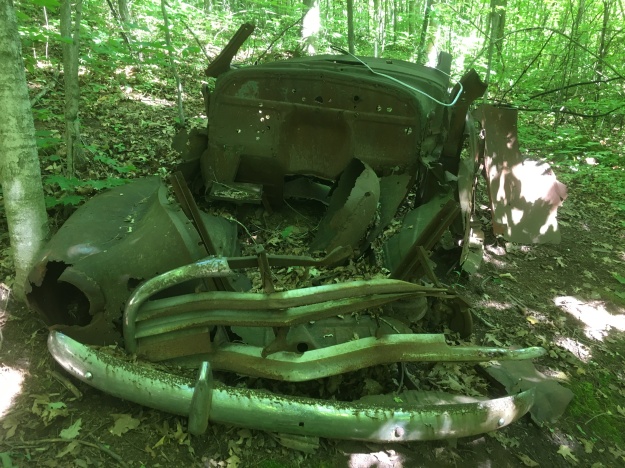 Flowering Raspberries grow along the trail in many places.  Their flowers are quite large for the raspberry family and have a long period of blooms which also makes them of special interest to honey bees.  The fruit looks like a large flat raspberry and is used by mammals and birds.

Eskers are glacial deposits that run in nearly straight lines and rise above the surrounding landscapes.  They are formed during the melting phase of the ice age when water is rushing in a river either over or under the ice.  The formation of eskers is described in greater detail in our earlier post The Brampton Esker.  The Great Esker Side Trail runs, in part, along the top of an esker.  It stands about 30 metres above the surrounding terrain but is much shorter than the one in Brampton.  As far as eskers go, the Great Esker isn’t so great.  The Thelon Esker is almost 800 kilomtres long.  The trail leads directly up the esker.

The escarpment is made up of limestone and harder layers of dolostone.  Scattered throughout the landscape are large granite boulders that appear to be out of place.  They have been carried by the glacier and deposited across the province by the retreating ice sheet.  Rocks that are different sizes or minerals than the ones common to where they are found are known as glacial erratics.

Old stone fences run through the trees marking off the earlier fields.  More recently some guide wires have been put in some places along the trail.  These are growing into the trees in several spots. 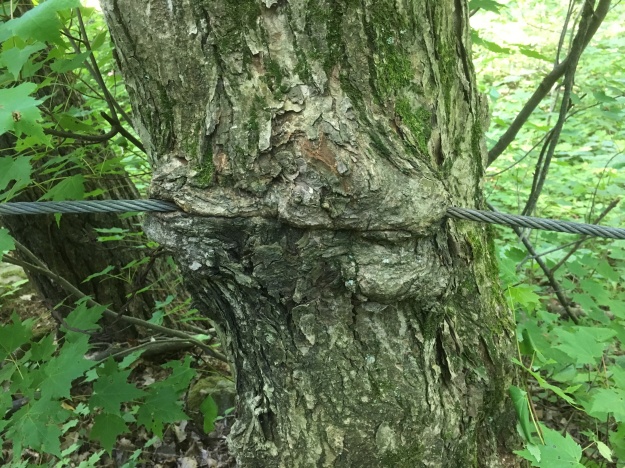 Most of the mayapples, or mandrakes, have been harvested by the local wildlife but a couple large ones remained that are still green.  When they start to turn yellow they will put off a pungent odor that attracts raccoons. It is suggested to remove the seeds if you do happen to harvest some of this native fruit.  You’ll have to be lucky because the raccoons check daily for the newly ripening fruit.

Butterflies abound along the trial and this Appalachian Brown was one of several flittering among the plants. 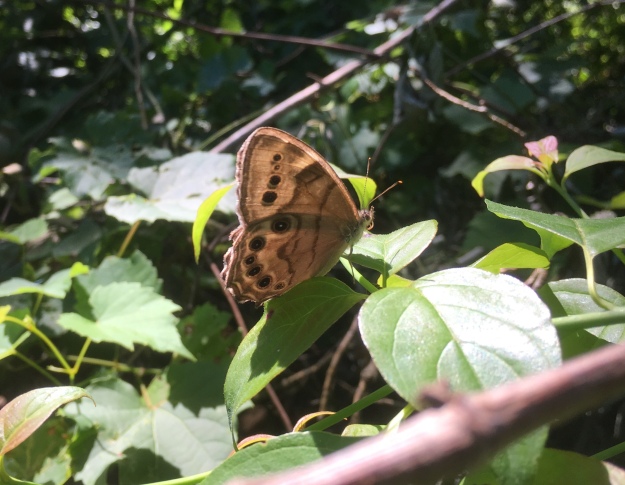 The poison ivy doing very well along the sides of the trails.  Urushiol oil in the leaves and stem causes an allergic reaction in 85% of people.  It is white when the stem is broken but turns black upon exposure to oxygen.  The oil is highly concentrated and a drop the size of a pin head can cause an allergic reaction in 500 people.  In the United States about 350,000 people a year get a rash that can last for up to 3 weeks. 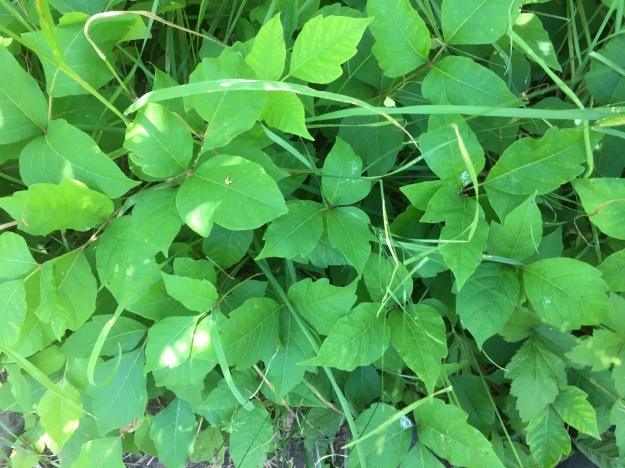 One of the truly interesting boardwalks is this one that takes advantage of this tree and the massive root system to carry the trail.

Snow’s Creek Falls are located at the intersection of 27th side road and the 8th line so we made a detour to see how much water was there at this time.

It was certainly cool to check out the Great Esker Side Trail and take the Bruce Trail App for a test run.  It likely means more hikes on the Bruce in the near future.